Share All sharing options for: Mets Daily Farm Report - 5/17/13: Syndergaard and Lara Get All the K's

Our boys in Vegas were unable to complete a 9th inning comeback that saw them come a run shy as they fell to the Omaha Storm Chasers, 5-4. The offense collected 11 hits and 8 walks, but also 11 strikeouts. There were multi-hit games from Josh Satin, Andrew Brown, Zach Lutz, and Eric Campbell. I mention these four because they all have something in common -- they could all probably out-hit Ike Davis at the Major League level right now. At the very least, they could all hit left handed pitching better than Ike. I know that before he was sent down, Collins was having Brown field grounders at first in anticipation of him seeing some time there. It shows they've thought about it. At this point, I'm tired of waiting for Ike to figure it out again in the Bigs. I'd like to see him either sent down or platooned with any of the aforementioned bats.

The St. Lucie Mets gave up a run in the bottom of the 9th to lose Brevard County, 3-2. More importantly, Noah Syndergaard had a terrific outing, striking out 10 while walking none in 6.2 innings. His ERA is sitting at 2.62 on the year. Syndergaard's K/9 and BB/9 now sit at 9.7 and 2.9, respectively. It's hard to not get overly excited about what he's been doing in Hi-A lately. His last five starts look like this: 32.2 IP, 27 H, 4 ER, 6 BB, 33 K. Couple these numbers with reports that his curveball is coming around and I have a full-on prospect man-crush.

We had ourselves an old fashioned pitcher's duel last night in Augusta, as Rainy Lara and Kendry Flores matched zeroes for 8 plus innings. The Sand Gnats finally broke the deadlock in the 11th, dropping a six-spot that Augusta was unable to match. Lara was superb, putting up a line of 8 IP, 2 H, 0 ER, 1 BB, 9 K. Dang. He came into the game with 1.86 FIP. His ERA was lowered to 1.17. This scouting report describes Lara as "not an impact talent, but has a Major League future..." One thing is for sure, he has shown he can handle A ball. 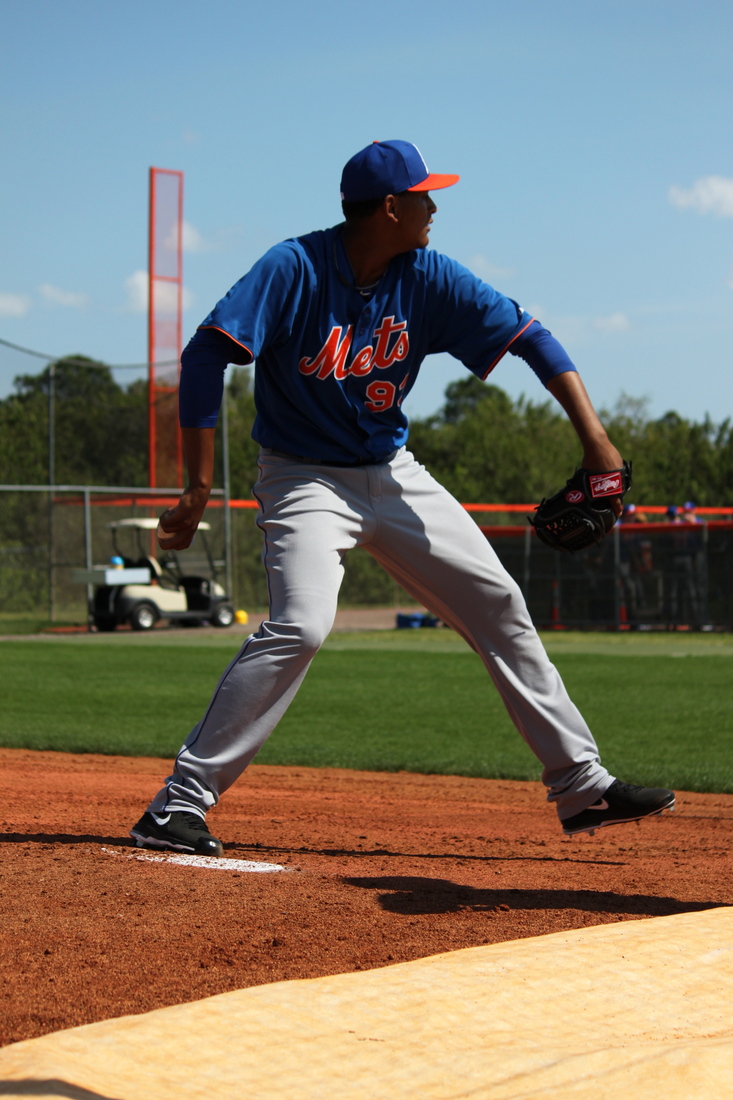 Rainy Lara is sporting a 1.17 ERA on the season (Photo Credit: Chris McShane)

Despite Noah Syndergaard racking up double-digit strikeouts, I think the star has to go to Savannah's Rainy Lara and his 8 IP, 2 H, 0 R, 1 BB, 9 K masterpiece. The 22-year old righty now has 47 strikeouts versus just five walks this season. in 2012, Lara posted a 2.91 ERA with over 10 strikeouts per nine in 12 starts for Brooklyn.

For more on Lara read Rob's piece from earlier this spring detailing Lara as a sleeper prospect for 2013.

Not a ton of candidates tonight so I'm giving the horns to a prospect who has disappointed me thus far, Phillip Evans. The Mets went over-slot to draft Evans in 2011 and he has yet to reward their faith in him.