Dillon Gee was decent in his start, but a pair of late home runs led the way as the Mets beat the Cubs for the second time in three games.

Share All sharing options for: Mets vs. Cubs Recap: Juan Lagares and Daniel Murphy home runs lead the Mets to first series win in a month

It would be great if a Mets series victory over the Chicago Cubs—a team that finished fifth of six teams in the National League Central the past three years and entered play today six games below .500—weren’t a cause for celebration. But the Mets have been even worse than the Cubs this year, and the fact that they pulled out a win in the rubber game of their weekend series was something of a relief. 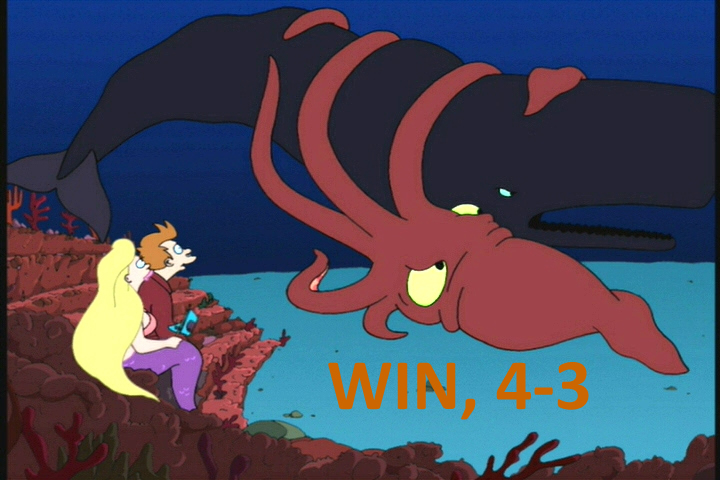 The last time the Mets won a series was in the middle of April, when they surprisingly beat the Nationals in two of three games at Citi Field on a weekend that they faced Stephen Strasburg, Gio Gonzalez, and Jordan ZImmermann. They split a pair of two-game "series" between then and now, too, one thanks to inclement weather in Atlanta and the other thanks to Major League Baseball’s quirky schedule. But until today, it had been a month since the Mets beat a team more often than that team had beaten them.

As for the game at hand, Dillon Gee looked more like his 2012 self for most of his outing. While he only pitched five-plus innings, Gee struck out six, walked one, and gave up three runs. On top of the good strikeout and walk numbers, his average fastball velocity was on par with last year’s, something that wasn’t happening in the early going this year.

On the downside, however, Gee gave up a two-run home run to opposing pitcher Travis Wood in the fifth inning, which marked the first two runs scored by either team in the game. And after David Wright drove in a run with a single in the bottom of the inning to cut the Mets’ deficit in half, Gee gave up a solo home run to Ryan Sweeney to begin the sixth inning before allowing a Nate Schierholtz double and getting the hook.

Luckily for the Mets, the bullpen was in tip-top shape this afternoon, starting with Greg Burke, who retired the first three batters he faced, stranding Schierholtz at third base.

With two outs in the top of the seventh, Ruben Tejada singled. The left-handed Wood was still on the mound for Chicago, and if there was one thing Juan Lagares showed in the minor leagues that might help the Mets, it was his ability to hit left-handed pitching. He hadn’t hit much at all in limited playing time since he was called up, but Lagares drilled a two-run home run off Wood to tie the game at three.

Scott Rice took over for the Mets in the bottom of the inning and pitched the first of his two scoreless frames. Daniel Murphy, who was hitting leadoff today, led off the eight with a solo Blue Collar Blast against Kyuji Fujikawa to put the Mets ahead 4-3.

Rice completed his scoreless eighth inning, and the Mets didn’t add any insurance runs against Carlos Marmol in the top of the ninth. But Bobby Parnell, who has very good for a while and excellent this season, struck out two batters in a one-two-three bottom of the ninth to preserve the Mets’ slim lead and notch the series victory.

The Mets begin a three-game series against the very good Cincinnati Reds tomorrow at 7:10 pm EDT at Citi Field. Shaun Marcum is slated to start for New York, while Johnny Cueto will start for Cincinnati. 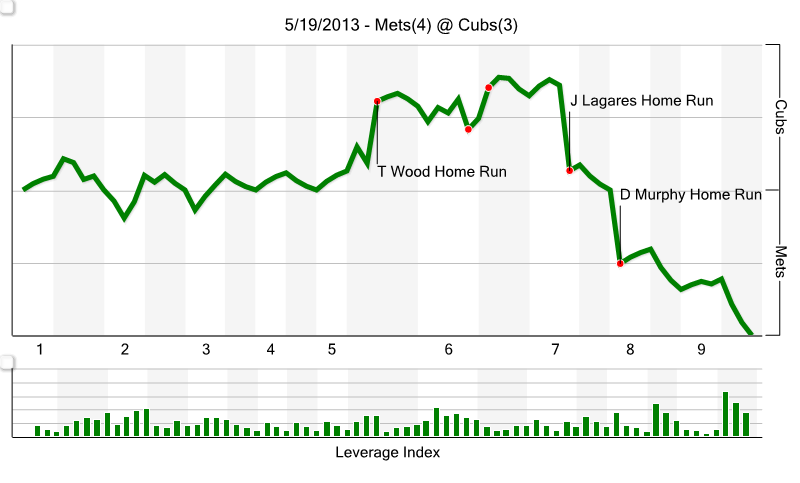