Against the dynamic duo of Brooks Raley and Esmailin Caridad, the Las Vegas offense could muster absolutely nothing. Francisco Pena was one of three 51s to actually get a hit, but unlike Zach Lutz and Rafael Montero, his hit flew over the stands for a home run. Speaking of Montero, he struck out twice, going 1 for 3 for the night. Oh, you want to know about his pitching line? Right. Montero looked like he belonged in AAA, almost going the distance in the seven-inning shortened game. He recorded all but one out, and only allowed one run of his own, but still got hit with the loss. Brian Bogusevic led off the 7th inning for Iowa and deposited the ball over the left field stands, tying the game. Montero retired the next two batters, but walked Brad Nelson. Though his pitch count was below 90 (86), Wally Backman interpreted this as Montero tiring, and brought in Josh Edgin. Edgin promptly allowed two hits, allowing the game winning run to score. Par the course for Edgin.

This seven-inning shortened affair made up the rained-out game from Monday. For the first five innings of the game, Iowa starter Barret Loux blanked the 51s, while D.J. Mitchell got knocked around, giving up a run in the 1st, two in the 3rd, and two in the 5th. When Las Vegas finally broke through, they did so with a bang, scoring five runs in the top of the 6th. A Brent Lillibridge error got things started, and when everything was said and done, the 51s batted around, coaxing two walks out from Cubs pitchers and hitting three singles and a double. Unfortunately, in the bottom of the inning, Gonzalez Germen gave up the go-ahead run, allowing a home run to part-time major leaguer Brian Bogusevic, his second such soul-crushing home run of the day. With three outs between them and their second morale-draining loss in one day, the 51s did their best, but could muster nothing against Cubs closer Blake Parker. With two outs, Omar Quintanilla induced a walk, but the very next batter, Josh Satin, quickly popped up to second, ending the game.

The game started out well for the B-Mets as, surprise, surprise, they scored in the 1st inning. With a man on, Cesar Puello got things going with a home run over the centerfield wall, his sixth of the year. After that homer, despite knocking an additional eleven hits, Binghamton would score only once more, in the 8th inning, when Danny Muno doubled, moved up on a wild pitch, and then came home on a Josh Rodriguez single. Binghamton starter Jacob deGrom did not fare well at all, allowing seven earned runs over four plus innings. New Britain starter Trevor May was just as ineffective as deGrom was, allowing eight hits and five walks over five innings, but was somehow able to escape trouble time and time again, owing to B-Met offensive trouble, and some old fashioned luck.

In a messy game that saw St. Lucie commit three errors and Dunedin commit two, the Mets edged out Blue Jays. Alex Panteliodis wasn't overly impressive, but he held the opposition to only run earned run over five plus innings. His counterpart, Casey Lawrence was a bit unluckier, as he gave up three earned runs in the same amount of time. Chasen Bradford and Hamilton Bennett came in for the 7th and 8th innings, and T.J. Chism was inserted in the 9th, earning his fourth save.

Last time I did a recap where Steven Matz pitched, the intriguing lefty had his worst start of the season. Well, this time, he did the exact opposite, and pitched perhaps his best game this season. Over six innings, the New York native allowed five hits and two runs, while walking one and striking out nine. Unfortunately, he was tagged with the loss, as the Sand Gnats could not figure out (a) what a RiverDog is and, (b) how to hit their pitchers. Despite having two of the top hitters in the league, Savannah could only manage four hits against Charleston (and none were hit by those two). Of note, with this start, Matz surpassed his innings total from last season (29 IP) and his surgically repaired arm and shoulder are in uncharted territory. 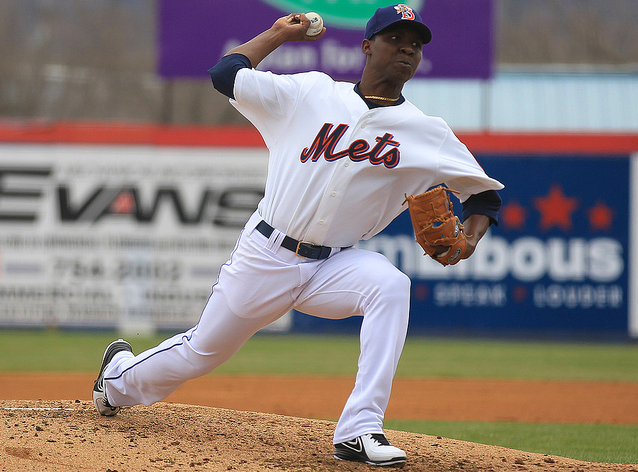 Steven Matz pitched a great game last night, but it would be hard to argue against Rafael Montero being our star. No one was sure what to expect from the young right-hander, but Montero delivered the goods, coming one out from a complete game while maintaining the excellent control he has demonstrated at lower minor league levels.

Once again, Josh Edgin is the Goat of the Night. I can’t recall how many times he has worn the horns on my watch, let alone everyone else’s. As is a common refrain of mine, not only did Edgin basically lose the game, but he allowed inherited runners to score, blemishing the pitching line of Rafael Montero’s dynamic AAA debut.