What will it mean for the Mets if Wilmer Flores can Go the Distance?

Share All sharing options for: Can Wilmer Flores Replace Ike?

This is the inaugural piece in what will be a monthly series where we'll evaluate Mets top prospects who are likely to appear at the major league level in the near future. In addition to analyzing the players themselves, we'll also take a look at the implications for the Mets as these players 'Go the Distance', so to speak.

Today, we'll start with longtime top prospect Wilmer Flores. It seems like nearly a lifetime ago that the lanky 16-year-old out of Venezuela grabbed headlines by signing a near-record deal with the club. That was 2008—back when Flores was still considered a shortstop and was in the midst of generating more than a little excitement with an outstanding pro debut (see .842 OPS) in Kingsport.

Fast forward to 2013. Flores has successfully navigated the long, slow climb to Triple-A. There were most certainly some ebbs and flows along the way. On the one hand, a hit tool that scouts labeled 'advanced' back in Kingsport remained so at nearly every rung, while his power game went from 'developing' to 'developed'. On the other, he's not the long-term shortstop or the Miguel Cabrera clone we hoped he might become back in those salad days of rookie ball. But, all told, the journey has been a good one.

Flores is currently batting .267/.322/.435 with four homers for the Las Vegas 51s. Just as important is the fact that he's also compiled 14 walks against only 20 strikeouts. Not eye-popping numbers by any means, but certainly impressive. And even more so when you consider that the sturdy young infielder is making his Triple-A debut this season, currently ranked the fourth-youngest player in the Pacific Coast League and the seventh-youngest in all of Triple-A baseball.

In 2,715 professional plate appearances, Wilmer Flores has faced a pitcher younger than himself just 14 times.

In fact, that's a pretty fitting summary of the young Venezuelan's career thus far: Strong results against much older competition. For the record, I have not been able to find a player—in any organization—with that many plate appearances and of which so few are against younger competition. If anyone else can, let me know. Suddenly, his .283/.327/.413 career minor league mark looks a heck of a lot more impressive.

Now, to address the central question of whether Flores can be considered a viable alternative to Ike Davis. Well, it's pretty clear that Davis needs to be relieved of duty, at least for the time being. I trust that you don't need want me to get into the details of the train wreck that has been his 2013, but here goes:

As of Wednesday morning Ike is officially batting under .150 (.149/.229/.248); that's worse than 28 different pitchers (minimum of 15 plate appearances). Among qualified batters, Ike has the second-worst batting average, third-worst on-base percentage, and—perhaps most shockingly—the fourth-worst slugging percentage. He's being outslugged by Ruben Tejada for God's sake! And things are not looking up. He has one hit over his last ten games.

Ike can't be in the lineup right now. He needs to head out to Las Vegas to rediscover his stroke and, at that point, restate his sinking case to be a part of the long-term solution. Until then, the Mets need a different option. So once again, is Flores that option? 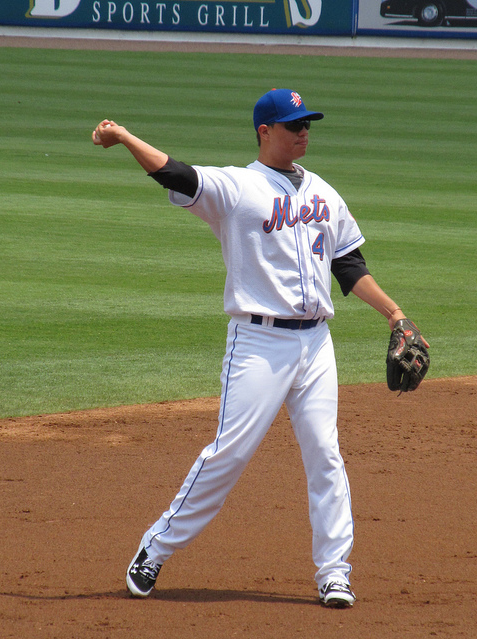 In the immediate future (as in, like, tomorrow) I'd say, probably not. Flores is one of the youngest players at Triple-A. Pushing him to the major league level might be a little hasty, especially when you consider that his numbers, while strong, don't yet indicate mastery of his current level. His current Minor League Equivalency spits out a gross .209/.259/.331 line. Additionally, the club has a handful of other decent corner options (i.e., Brown, Lutz, Satin, etc).

Still, I don't think it would be unreasonable to imagine a scenario later in the summer where, should Flores continue hitting, a call-up could be in order either to supplant one of the aforementioned depth options or to begin a more forward-looking platoon with Ike (Flores is a career .307/.348/.466 hitter against left-handed pitching). I say forward-looking because this arrangement might be an interesting foot in the door for Flores, allowing him to showoff his wares as a long-term first base option—should Ike continue to play himself out of that role.

There has been recent chatter around the club—as reported on last night's radio broadcast—that if Davis is demoted, Daniel Murphy may slide over to first base. In that situation, the man without a position, Jordany Valdespin, would potentially have the opportunity to establish himself at second base, which is his natural home. But I can't imagine the leash on the lightning rod player (who also happens to be batting .213) would be extremely long. So it's not beyond the realm of possibility that the Mets would call on Flores' to man second.

In any case, Wilmer Flores clearly represents a strong option for a team bereft of offensive production going forward. Whether at first or second base, Flores has shown the kind potential at the dish that this team can't deny much longer.