In his first game back since dealing with shoulder issues, Zack Wheeler got the win, his third this year, but seemed a bit rusty. Over five innings, the Mets' number one prospect walked two batters, struck out two batters, and allowed two home runs (including one to newly anointed "51s killer" Brian Bogusevic who has gone yard in every game of this series). The Las Vegas offense had Wheeler's back, and to make sure that his return to the pitcher's mound would result in a victory, they hammered former major leaguer Guillermo Moscoso for eight runs. Collin Cowgill inflicted the most damage, plating four runs in the fourth inning on a grand slam to left. Kirk Nieuwenhuis and Francisco Pena joined in in the home run parade, and Wilmer Flores and Omar Quintanilla, wanting to stand out from the crowd with something different, each hit a triple. David Aardsma made his Mets debut in the ninth inning, walking the bases loaded and striking out the side—madness that will seemingly fit right in.

As expected, Rafael Montero was returned to AA-Binghamton. Montero pitched 6.2 innings of two-run ball in his debut, walking one and striking out five. I, personally, think pitched well enough, and has been dominant enough in AA to warrant a second look, but we were told that his promotion was temporary from the get go.

Dylan Owen's demotion comes as more of a surprise, as there hadn't been much talk about it, but a roster spot in AAA-Vegas needed to be cleared for David Aardsma, and looking at the numbers, it is clear that Owen is having trouble against AAA hitters, anyway. The 26-year-old first debuted in AAA back in 2011, primarily as a starter, but has transitioned into relief. In 2013, he has a 7.50 ERA in 18 innings, with a roughly 1:1 K/BB ratio.

Erik Goeddel got the start for the B-Mets, but he drew the short end of the stick, as he had to oppose Nats top prospect Alex Meyer, their flame throwing 2011 first-round draft pick. The Rock Cats got to Goeddel first, tagging him for two runs in the 2nd inning, but Binghamton didn't leave their starter high and dry, and roughed up Meyer a bit. In the 4th inning, the B-Mets almost batted around, and drove in 4 runs on four singles, a walk, an error, and a sac fly. Despite a wishy-washy performance, Goeddel was able to keep New Britain off the board for the rest of his time on the mound. After Meyer left the game, Binghamton was able to score a few runs off of the Rock Cats bullpen, while the Binghamton bullpen was mostly solid.

Like yesterday, the score between St. Lucie and Dunedin was 5-3, but unlike yesterday, Dunedin was the team that scored five runs and got the victory. Noah Syndergaard took the hill for St. Lucie, and turned in one of his poorer outings this year, allowing three earned runs (and an unearned run due to a Gilbert Gomez fielding error) in five plus innings while walking two, striking only four batters out, and hitting a batter. The game was back-and-forth until the 5th inning, when Dunedin hit back-to-back doubles off of Syndergaard to give them the lead, a lead they would not relinquish, as the Blue Jays' bullpen was nearly flawless, allowing two hits and nothing more over three plus innings of work.

The Sand Gnats dropped another game to Charleston, wasting a decent outing by Rainy Lara and an impressive two plus inning relief outing by Beck Wheeler. With the loss, the Sand Gnats fell to third place in the Southern Division, 1.5 games behind the RiverDogs. Lara gave up a few hits and a few hits there, and didn't overall pitch that poorly, but Savannah was simply stymied by RiverDogs' pitchers. Down by three in the 9th, the Sand Gnats began something of a rally, and even scored, but with the tying runs on, Cole Frenzel flew out to center to end the threat, and the game. 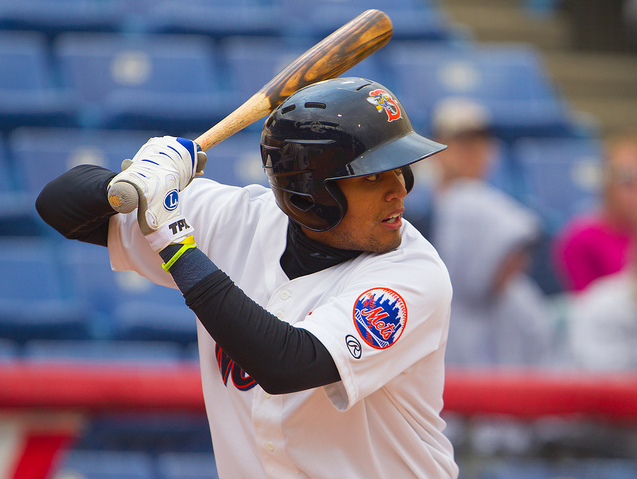 Nice performances abound in Las Vegas last night from Kirk Nieuwenhuis, Francisco Pena, and Collin Cowgill. Cowgill only had the one hit, but he made that one hit count, whacking a grand slam to give the 51s a commanding lead over the Iowa Cubs and to take some pressure off of a returning Zack Wheeler. Through 16 games with Las Vegas Cowgill is currently batting .233/.324/.433.

Cam Maron did not have a good night at the plate or behind it. Offensively, he went 0-for-4 on the evening and on the other side the Dunedin Blue Jays were feeling very frisky, attempting five stolen bases. Of those five attempts, Maron only caught a single runner. The 22-year-old is currently batting .206/.268/.286 for St. Lucie.