The Mets and the great rally cap conformity failure of 1987

Share All sharing options for: The Mets and the great rally cap conformity failure of 1987

As is the case with many of baseball's most important innovations, the origins of the rally cap remain murky. What we can say for sure is the popularity of the rally cap soared alongside the fortunes of the Mets of the 1980s. The Mets' 1985 campaign is often pointed to as the tipping point for rally cap mania, and their use of it during that season spread the practice around baseball. When the rally cap first emerged, it was met with skepticism and derision by non-believers, but the power of the rally cap was so potent that infidels could be converted at the mere sight of their favorite team sporting them.

Such powers were on full display during the epic Rick Camp Game between the Mets and Braves on July 4-5, 1985. During the wee hours of that insane contest, Mets players in the dugout wore caps turned inside-out and placed in strange positions, hoping this would somehow grant them victory in a game that seemed it might never end. Atlanta's announcer John Sterling (yes, that John Sterling) had never seen such a thing before, and his first impulse was to mock the Mets' fashion statement. A few innings later, however, the Braves mimicked the look, hoping to counter the Mets' mojo. Sterling professed to find this sight delightful, and thus a heathen was brought over to the cause.

In the national consciousness, the rally cap ritual was forever endowed with special powers once Mets players were seen wearing them during the NBC broadcast of game 6 of the 1986 World Series. Rally caps caught on with the public quickly because they were manifestations of an idea fans had long held: They could will their team to victory through the execution of some simple action. Rally caps also blew up because they were spiritual cousins to the-lampshade-on-the-head, a practice whose enjoyment is directly proportional to how hammered everyone in the room is.

The Mets dedicated themselves to the cause of Rally Cap Evangelism by scheduling a Rally Cap Day on July 26, 1987. It was an idea whose time had come, as the team proudly announced it was "one of the greatest give-a-way days in Mets history" that was "sold out farther in advance than any other game" that season.

By making an official Rally Cap Day, the Mets were attempting to transform a folk ritual into an organized religion. Prior to this, there were no formal rules about what constituted a rally cap. One would simply shape a cap into whatever their mood (or level of alcohol consumption) dictated. The undercurrent of Rally Cap Day, on the other hand, insisted that a true talisman must be worn in the right manner and at the right time to make full use of its magic. The point of the event was not to celebrate an organic cultural expression, but to force orthodoxy on a polyglot congregation.

And so, fans who arrived at Shea that Sunday afternoon were not simply given Official Rally Caps. They were also given a thorough catechism for this sacred rite. The rally caps came with a little velcro baseball, and a set of instructions as to exactly where to place the ball, and when, and why.

It's important to note that because this was 1987, the giveaway was sponsored by Crazy Eddie, the electronics store whose aggressive commercials ran nonstop on television, and whose signature yellow t-shirts were a staple in the wardrobe of every self-respecting mook in the tri-state area. As a business, though, Crazy Eddie was also little more than a shell game, and while this event was taking place, they were in the midst of executing one of the biggest securities frauds of the 1980s. It wasn't easy to stand out as a huge securities fraud in the 1980s, but Crazy Eddie did it.

I can't say for sure if Crazy Eddie had any input for this event, but the litany of rules listed (as reproduced in a page from an official Mets program scanned below) seem to be the product of a not entirely sane mind. Or at least one gripped by a crippling case of OCD. "Put ball in left-top side of hat in fifth and eighth innings TO MAKE THE DEMONS STOP."

And while I am on board with the sentiment expressed in #10, LET'S GO METS is not an action you can will to happen. You'd be much better off yelling this at a ballgame, unless you prefer a stadium full of 50,000 fans silently rearranging headgear. 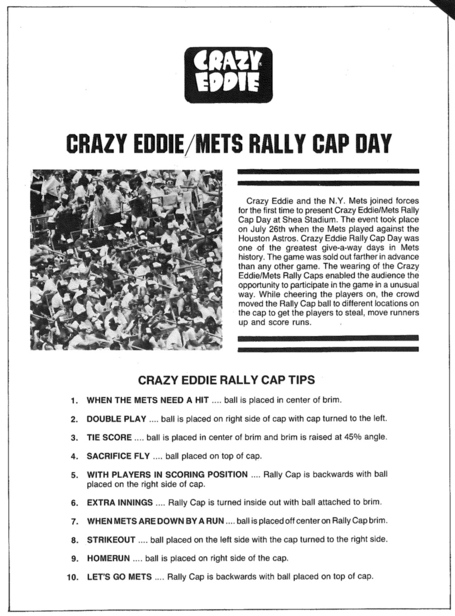 The Mets aimed to enforce rally cap conformity, and in so doing unlock the codes that would harness rally cap vibes on behalf of the home team. In both efforts, they failed.

On Rally Cap Day, Doc Gooden pitched eight innings of one-run ball against the Astros, while his teammates scratched out a run in the bottom of the eighth on a bases loaded walk to put them ahead, 2-1. Jesse Orosco notched the first two outs of the ninth with ease and also got rookie Ken Caminiti into a two-strike hole before hanging a fat slider to the freshman. Caminiti singled. Then Davey Lopes singled. Then Gerald Young blooped one behind first to bring home Caminiti and tie the game. And then Billy Hatcher (a man who'd hurt Orosco before) crushed an Orosco offering into the visiting bullpen in left. His blast put Houston on top, 5-2, which would stand as the winning margin. The loss plunged the defending champs 8.5 games out of first place.

And yet, this was only the Mets' second worst loss that day. Earlier that morning, someone made off with the 1986 championship flag minutes after it had been hoisted. According to Shea Stadium's head groundskeeper Pete Flynn, "We put it up at 8 and saw it was gone at 9. Do we have a backup pennant? Somewhere. We'll have to find it."

Perhaps this bad karma came from associating the team with Crazy Eddie, whose grotesque fraud was beginning to unravel right around the time Rally Cap Day occurred. Or perhaps a brutal loss was the inevitable result of trying to rein in the untameable rally cap ritual. The Mets' attempt to codify rally cap rules had instead turned rally cap's power against them.

To the best of my knowledge, the Mets never again tried to so rigidly define rally cap parameters. They recognized the rally cap worked best as a genuine expression of hope and belief. Preferably expressed by sloshed dudes in the cheap seats.