Minor League Report - 5/26/13: You Think You're Alone Until You Realize You're In It

Purvey all the Metropolitan farm system news and notes from the night previous!

Share All sharing options for: Minor League Report - 5/26/13: You Think You're Alone Until You Realize You're In It

Our Pacific Coast League heroes managed to fall to 22-25 after losing to the Salt Lake Bees seven to five last night at Cashman Field. The Fightin' Aliens were able to accrue some offense against Bees starter Barry Enright, who walked six in 2.2 innings, and against his reliever Jeremy Berg to the tune of back-to-back home runs in the bottom of the fourth from Captain Kirk and Collin Cowgill. Now being staked to a 5-3 lead in the top of the fifth, Chris Schwinden said (hypothetically), "You know what, I think we need seven runs to win this game and I have the over in Vegas" so he surrendered three runs to make it one run deficit. The score remained 6-5 until David Aardsma (he of the first name of all MLB players in alphabetical order fame) gave up a solo home run to John Hester. Fernando Cabrera pitched a scoreless ninth to earn his first save of the season.

Hey, sometimes three hits can win a game for you.

NYSEG Stadium was witness to some wonderful walk-offery from Allan Dykstra. Now did he reach on a throwing error from Sea Dogs first baseman Travis Shaw? Surely he did, but walk-offs of the abstruse variety are always fun and boo on you if you say otherwise. Logan Verrett and Drake Britton engaged in a stellar Corpus Christi v. Waco pitcher's duel though Britton had to yanked after five. Verrett went seven great innings before Josh Rodriguez redeemed himself from a run-scoring error in the third by hitting a game tying two-run home run off Pete Ruiz to knot the game at two. Adam Kolarek and Jeff Walters were wonderful in their three relief innings, causing me to feel wonderful as I write this recap. B-Met pitching struck out thirteen batters in 10 innings, and the only earned run allowed came via an RBI single from Sox uber-prospect Xander Boegarts.

Sexy pitching night all around as Angel Cuan, Jeurys Familia, and Everyone's Favorite Father combined to two-hit the Marauders last night, making an RBI single by Aliberto Cordero in the second stand as the game-winning run. Eliecer Navarro fell to 0-9 for the Marauders (despite not being all that bad this season) while Cuan had his second straight outing of seven shutout innings, as neither team managed to allow an extra-base hit.

Because one walk-off is too cliche.

Jake Kuebler got a spot start last night and pitched four good innings, which matched the longest outing this season for the former first baseman-turned-relief pitcher. However, Martin Agosta pitched seven really good innings for the GreenJackets, leaving in the eighth with a 1-0 lead and Derek Law pitched a 1-2-3 eighth to ensure said lead would remain into the ninth. Marcos Camarena was the first to blink, allowing a Ben Turner RBI single in the sixth. After Camarena's four relief innings, Tyler Vanderheiden pitched a scoreless ninth, and what happened next was sheer magic:

Yes, Phillip Evans, who I said "might as well have horns soldered to his cap at this rate" a mere twenty-four hours prior, played walk-off hero at Grayson Park. Isn't baseball beautiful, since you think you're alone until you realize you're in it? Also, like the St. Lucie game, nary an extra-base hit to be found in this game either. 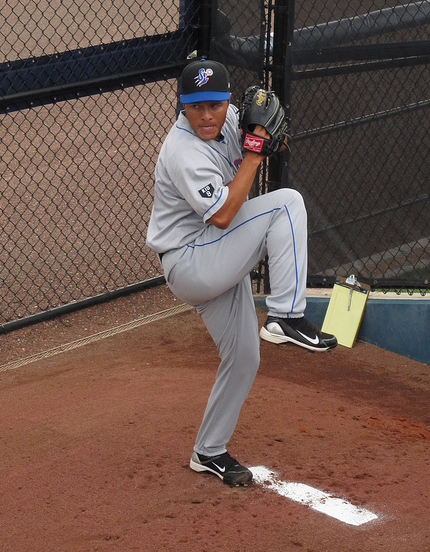 Star(s) of the Night