A two-run single by Ike Davis in the eighth inning put the Mets ahead for good after Shaun Marcum's best start of the year.

Shaun Marcum, who pitched very poorly in his first six appearances with the Mets, was outstanding against the Braves on Sunday night. The 31-year-old threw seven innings, struck out twelve, walked none, and gave up two runs.

Marcum's Harvey-esque start was, of course, not enough for the Mets to carry a lead at the time he departed. Although Lucas Duda had put the Mets on the board first with a solo home run in the fourth inning, the team's hitters didn't do much else of consequence in the first seven innings of the game.

With the team's slim lead still intact in the seventh, Justin Upton reached safely on an infield single to Mets shortstop Ruben Tejada. One out later, Dan Uggla parked a hanger from Marcum in the left field 300 level at Citi Field to turn the Braves' one-run deficit into a one-run lead.

Considering the way the Mets have struggled to score runs for the past month, it wouldn't have been the least bit surprising if the game ended 2-1 in favor of Atlanta. Although the Mets didn't score in the bottom of the seventh, they certainly did in the bottom of the eighth against Braves reliever Cory Gearrin.

Justin Turner led off with a single. David Wright struck out, but Lucas Duda hit a ground-rule double down that hopped into the stands down the left field line to put runners at second and third. John Buck singled, plating Turner and tying the game. After Mike Baxter was hit by a pitch to load the bases, Ike Davis single to score two runs, giving the Mets a 4-2 lead.

Bobby Parnell retired Jason Heyward, Justin Upton, and Freddie Freeman in order in the ninth inning to end the game. He struck out Heyward and Freeman in the impressive inning and now has a 2.01 ERA and 2.20 FIP on the season.

There's been plenty of speculation about Ike Davis's future with the Mets lately, but his 2-for-3 night with a well-timed single and a walk could be the sort of night that buys him more time. With a .224 wOBA on the year, though, a couple of singles shouldn't sway the Mets' plan for Davis in either direction.

The Mets begin a four-game, two-borough series with the Yankees at Citi Field tomorrow night at 7:10 pm. Jon Niese and Phil Hughes are slated to start. 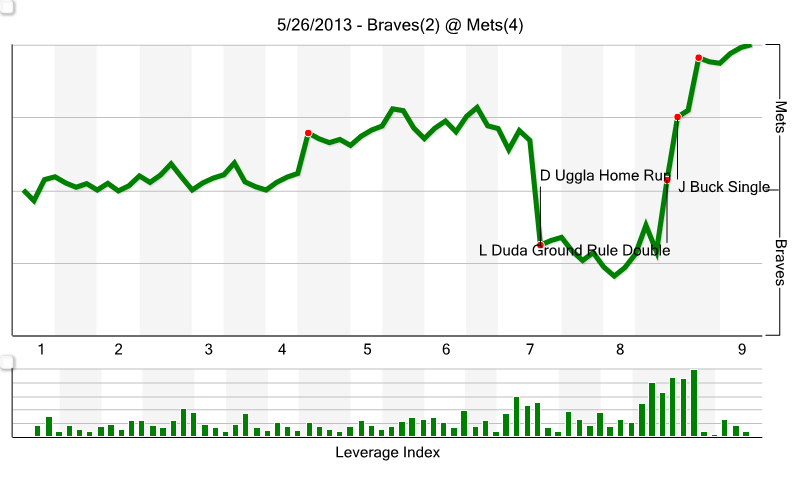