Matt Harvey's tenth start of the season wasn't terrible, but it wasn't quite as good as his first nine.

On Wednesday, May 22, Matt Harvey had his worst start of the 2013 season. Of course, this being Matt Harvey, it wasn't exactly disastrous. Against a very good Cincinnati Reds lineup, Harvey ran into some trouble, particularly when Joey Votto took him deep for a two-run home run in the third inning.

For a few starts now, Harvey has really mixed his pitches, throwing his curve much more frequently than he did int he past. In this start, he clearly relied heavily upon his slider, which was the most effective in generating swings-and-misses.

Here's the plot of Harvey's pitches from the game: 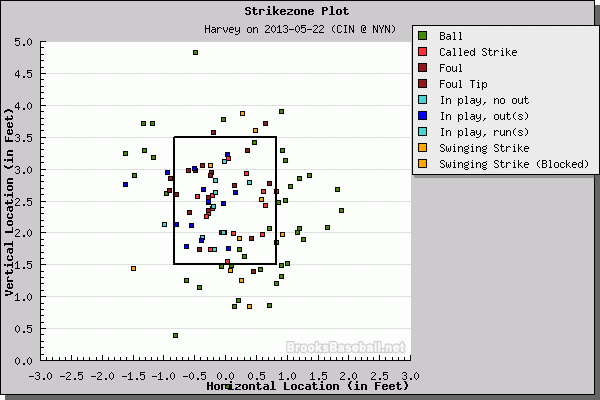 As he did in his ninth start, Harvey generated most of his swinging strikes in the lower half of the zone and below. He did, however, notch a few whiffs—the yellow dots above labeled swinging strikes—on high pitches.

As of Monday, May 27, here's how Harvey compares to his fellow National League starting pitchers.

Harvey's strikeout and walk rates each took a slight step in the wrong direction in his tenth start, but his swinging strike rate is second to only Cole Hamels, which means there should be plenty more strikeouts to come.

Like R.A. Dickey last year, it looks like Harvey will be in the thick of the Cy Young race. Here's how Harvey's first ten starts this year compare with the first ten starts of three of the Mets' previous Cy Young seasons:

Like Harvey, Seaver and Gooden saw a slight uptick in ERA in the tenth start of the season. R.A. Dickey's tenth start was an excellent one, though, and he saw a big drop in ERA as a result. But Harvey's numbers are still awfully close to matching or besting these three excellent seasons at this point.

Thanks to Joel, here are a few dazzling GIFs from Harvey's start. While he struggled against some of the Reds' other hitters, he struck out Shin Soo Choo and Jay Bruce twice each.

For more of Joel's Harvey GIFs, head on over to F Yeah Matt Harvey.