Is Jack Leathersich ready to help the Mets?

Is the 22-year-old strikeout machine ready to make the jump to the major league level?

Share All sharing options for: Is Jack Leathersich ready to help the Mets?

You may remember a session that the Mets held back during the winter months where key members of the club's front office held court down at Citi Field exclusively for season ticket holders. The central message was generally what one might have expected, with emphasis placed on process and the future.

For us prospect watchers, however, the most interesting moment came when an astute member of the audience queried specifically about one Jack Leathersich -- @LeatherRocket, to some. The season ticket holder in question asked about the 22-year-old's proximity to the majors. Interestingly, this was J.P. Ricciardi's response:

"I think he’s one of the guys who could get a taste of the big leagues at some point this year...It’s nice to have a left-hander with a ‘strikeout-ability.'"

Now this isn't entirely new ground. We covered this statement and the hard-throwing lefty's chances at a 2013 debut back in early February. In fact, I came to the conclusion that the combination of stuff and deception from the left side did indeed point to a major league relief pitcher; however, perhaps not as early as Ricciardi indicated. But the question is, with a couple of months in the bank, has anything changed? Well -- to be frank -- yes, things have indeed changed.

In our first go-around we pointed to Josh Edgin as a baseline for Leathersich, based on handedness, a similar -- if slightly superior -- repertoire, and an enviable meteoric ascent through the system in 2012. In doing so, we decided that while Leathersich's far superior strikeout rates at the same levels were impressive, he seemed to have more of an issue commanding the ball -- which would ultimately slow his rate of progress to the Show.

Let's see how those two figures have evolved as we've moved into 2013:

Pretty much more of what we've come to expect from Leathersich thus far. Though it's worth pointing out that the uptick in strikeouts -- after he had been declining with each new level -- has been a nice surprise. In fact, it's somewhat remarkable how many batters he has dispatched at Double-A, especially when you consider what the rest of the league -- with a minimum of 20 innings pitched -- is doing (see, Figure I). 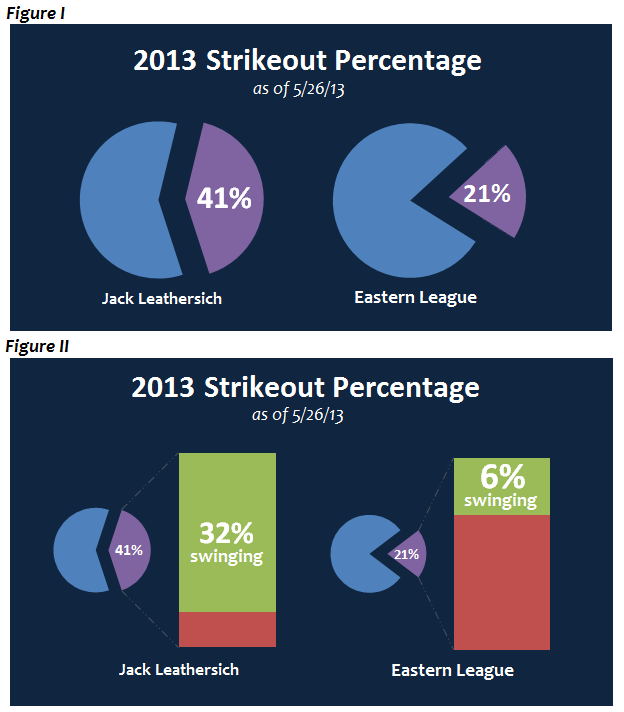 And it just gets better the more we dig. By that I mean when we break out those strikeouts as either swinging or looking the numbers become even more eye-opening (see, Figure II).

This seems to jibe with what we already know about Leathersich: With a fastball that can touch the mid-90's, a solid curve from the left side, and some deception -- not just in delivery but also in pitch selection, as fellow Bingo lefty Adam Kolarek recently explained in a podcast interview -- he has the ability to make advanced opposition swing and miss. As an aside, it's worth pointing out the lefty's strange reverse splits in 2013, where lefties are batting a healthy .353 against him while righthanders suffer to the tune of a .125 mark. This is a trend that appeared in 2012 as well.

Meanwhile let's look at the other side of that coin, the walks. Unfortunately, the general negative trend seems to have held true: He's walking more guys the higher he climbs. It makes sense too. For a guy with good, not great stuff, that gets a sizable boost thanks to deception, better hitters should be able to challenge him, forcing him to work outside of the zone more often.

After walking seven batters over his first 6.2 innings pitched, Leathersich has only walked six over his last 15 innings.

However, here is where our evaluation deviates from February: After a rash of walks to start the season, Leathersich has showcased significantly improved command over the majority of 2013. Specifically, after walking seven batters over his first 6.2 innings pitched, he's only walked six over his last 15. That's an unintentional walk percentage of 9.5% over his last 11 appearances, dating back to April 23rd.

Is that a complete and utter revelation? Not necessarily; the Eastern League -- again, with a minimum of 20 innings pitched -- is boasting an 8.9% unintentional walk rate. The major league figure is currently 7.6%. It is, however, significant growth from a pitcher whose total package of ability and stuff has, very arguably, already surpassed a number of arms the Mets are currently featuring out of their bullpen.

So is he ready to help the major league staff or not? Tough to say, but one thing is for sure: If Leathersich keeps up the run he's been on since late April, he's going to get a chance to find out before too much longer.