Exaggeration aside, Matt Fox pitched the best game he's thrown in years, going six strong against the Reno Aces, allowing only two earned runs. He scattered seven hits, walked none, and struck out two. Arguably, he out-pitched top prospect Randall Delgado. The 51s got on the board first, scoring a run on three straight singles in the 1st inning. Fox and Delgado conspired to keep runs off the board for the next few innings, until the 5th inning rolled around. The Aces drove in a run in the 5th and 6th, giving them the 2-1 lead. In the 7th, Josh Edgin was brought in, and he gave up two more runs. In the bottom of the inning, Las Vegas' bats came alive, scoring three runs to tie the game 4-4. Armando Rodriguez was brought in to pitch the 8th, and like Fox and Edgin before him, gave up two runs to the Aces, putting the 51s back in a hole. Brian Bixler led off the 8th inning with a solo home run, bringing Las Vegas within one, but nobody else could get anything going, leaving a runner stranded on second. David Aardsma pitched a clean 9th, setting up the big comeback. Unfortunately, that big comeback never came, and the 51s dropped to two games below .500

Erik Goeddel logged another solid outing, as Binghamton beat the Altoona Curve(s?) eight to five. Goeddel allowed three runs over the course of his six innings of work, but all three were scored in the first two innings; from the third until he was removed, Goeddel settled down, allowing only one baserunner, a walk to first baseman Justin Howard in the 3rd. The B-Mets slowly chipped away at the deficit, scoring a run in the 2nd and the 4th. They finally broke through in the 6th inning, scoring two runs and capturing the lead on a Darrell Ceciliani double that scored Allan Dykstra and Cesar Puello. Shawn Teufel almost gave the lead right back in the top of the 7th, loading up the bases via walks without recording a single out, but Adam Kolarek put out the fire, getting the necessary three outs while allowing only one run to score. In the bottom of the inning, Binghamton padded their lead, putting up a four spot. Jack Leathersich pitched the final inning plus and did what he does best, striking out all five batters that he faced, picking up his third save.

Be still my beating heart: After 55 pitches, Steven Matz was removed from last night's game due to injury. We seem to have dodged a bullet for now though, as the issue was seemingly due to an apparent fingernail or blister problem -- not anything structural. Julian Hilario replaced Matz, and the Savannah offense seemed to respond, scoring four runs and capturing the lead with him on the hill. Of note, Brandon Nimmo returned from his DL stint, but showed rust, going 0-for-5 with a strikeout. 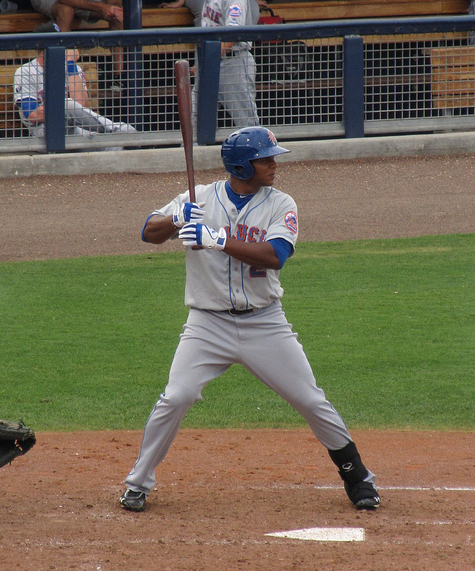 Cesar Puello did a little bit of everything last night. He notched one hit, a double. He stole a base, his 12th of the year. He was hit by a pitch. He scored three runs. Most importantly, he walked twice, giving him 12 walks on the year.

Honorable Mention goes to Savannah's Eudy Pina as he homered for the second night in a row. The 22-year-old's .166 ISO thus far would represent a career high; as would his impressive 10.3% walk rate.

Rain once again is the villain of the night, delaying Noah Syndergaard's start on a night that saw the Mets current ace pitch. In terms of performers, Armando Rodriguez was pretty ugly in the Las Vegas defeat.