When it comes to the Subway Series, the 1999 Matt Franco Game still reigns supreme.

Share All sharing options for: Profiles in craziness: The Matt Franco Game

During Monday night's game against the Yankees, an SNY text poll asked Mets fans to vote for their favorite Subway Series game ever. I was somewhat surprised that the runaway winner of this poll was the 2006 contest the Mets won in walkoff fashion against Mariano Rivera on a David Wright RBI double. But I was absolutely flabbergasted that another walkoff win against Rivera finished dead last in the voting.

I'm referring to the game played on July 10, 1999, which shall be known hereafter as the Matt Franco Game. The David Wright walkoff in 2006 was a thrilling moment, and perhaps Tuesday's walkoff will one day join the pantheon of great Subway Series victories (if it hasn't already). But neither can hold a candle to the Matt Franco Game, which destroys all crazy contenders. I can only assume that viewers who voted in this poll were either too young to remember 1999 or were stricken with a sudden bout of amnesia just as they dialed their phones. So, in the interests of educating the youth and/or amnesiacs of America, I thought a history lesson was in order.

On the glorious afternoon in question, the Mets were in the midst of a torrid stretch. At the beginning of June, they snapped a horrific eight-game losing streak by clobbering Roger Clemens at Yankee Stadium and had been playing out-of-their-minds baseball ever since. On July 9, Al Leiter matched up against Clemens for the second time that season and it was deja vu all over again. Just like their first matchup, Leiter dominated the Yanks while The Rocket was victimized by a long Mike Piazza homer in the Mets' 5-2 win at Shea.

The matchup on July 10 would be Rick Reed against Andy Pettitte, but neither starter would figure in the decision. The Yankees drew first blood when Paul O'Neill reached Reed for a two-run homer in the top of the first. The Mets immediately began chipping away at the deficit when Rickey Henderson (enjoying an ungodly season for a 40-year-old man) singled to start the bottom of the first, stole second, and came around to score on a Mike Piazza double. Roger Cedeno followed his lead in the second inning by singling, stealing second and third, and scoring on a Rey Ordonez sac fly to tie the game at 2.

The Mets took their first lead of the day in the bottom of the fourth, thanks to some lucky breaks and faulty Yankee fielding. Benny Agbayani reached base when a ball took a fortunate hop over third baseman Scott Brosius's head, then scored from first when Rickey Ledee couldn't chase down a long double from Robin Ventura. A Cedeno sac bunt moved Ventura to third, and Ordonez followed by hitting a ball to shallow right field. Ventura was not fleet of foot, yet tagged up on the fly out anyway. Paul O'Neill's throw from right beat Ventura to the plate by a considerable margin, but Jorge Posada failed to adequately block the plate, and Ventura slid around him for the Mets' fourth run. Yes, that means Rey Ordonez had two RBIs in this game. I told you it was a weird one.

The Mets' lead was short lived, as all leads in this game would prove to be. Rick Reed had been sharp since his rough first inning, but started off the top of the fifth by allowing consecutive dingers to Ricky Ledee and Jorge Posada. He was replaced in the top of the sixth by righty Greg McMichael, who gave up his own leadoff longball to O'Neill, putting the Yanks on top again. The visitors stretched their lead to 6-4 in the top of the seventh on yet another solo homer, this one by Chuck Knoblauch. You could BLAME BELTRAN for that one. Reliever RIgo Beltran in this case, but a Beltran nonetheless.

Pettitte held serve through six innings and gave way to Ramiro Mendoza in the bottom of the seventh, who proved to be just what the Mets ordered. Rickey Henderson started a rally with a check-swing blooper to right that he hustled into a double. Then John Olerud worked a two-out walk, which brought Mike Piazza to the plate, licking his chops.

Piazza proceeded to completely destroy a Mendoza pitch, launching it over the picnic tent beyond the visiting bullpen over the left field fence. The ball traveled an estimated 482 feet, and rocketed off Piazza's bat at such a speed that broadcasters were caught by surprise. Michael Kay (then the Yankees' radio man) didn't even have enough time to complete his signature "track, wall..." home run call, while in Mets' booth, Bob Murphy and Gary Cohen could only mutter "oh my goodness..." in sheer awe. Even the normally stoic Piazza allowed himself to Cadillac things a bit, as he flipped the bat while the ball sailed away. It was a thing of beauty and it gave the Mets a 7-6 lead. 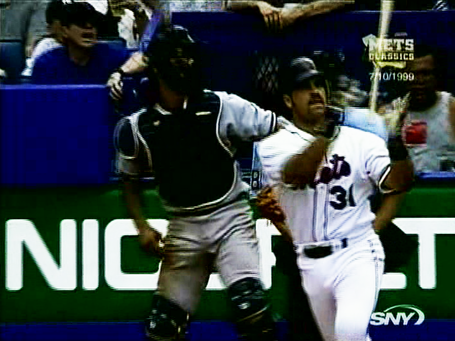 Majestic as the homer was, it would not hold up. In the top of the eighth, the latest Mets reliever, Dennis Cook, gave up a two-run shot to Posada that put the Yanks ahead once more, 8-7. It was the catcher's second homer of the day and the Bronx Bombers' sixth of the game. Cook, Turk Wendell, and Pat Mahomes managed to cap the Yanks' scoring there, but their teammates went quietly against Mike Stanton in the bottom of the eighth.

That meant the Mets would have to rally against Mariano Rivera in the bottom of the ninth. Rivera saved both Yankee victories against the Mets back in the Bronx in June and barely broke a sweat on either occasion. But those games occurred during the Mets' miserable losing streak. Their luck had turned since then, and it would keep on turning.

As usual, Rivera retired the first man he faced, getting Brian McRae to ground out harmlessly. The rest of the inning would be anything but a breeze. Next up was Rickey Henderson, one of the very few men able to earn a free pass against Rivera, and he did just that. Edgardo Alfonzo followed by hitting a long fly ball to deep center field. Bernie Williams pursued it, but never got a good read on the ball, and it fell just beyond his reach. Henderson ran to third and Alfonzo scampered to second, putting the tying and go-ahead runs in scoring position.

The next batter was John Olerud, and all he needed to do was hit a fly ball deep enough for the speedy Henderson to tag up and score. Olerud scorched one, but right at Tino Martinez at first. Martinez held the runners as he retired Olerud himself, bringing the Mets down to their final out.

With first base open, Mike Piazza the next scheduled batter, and rookie Melvin Mora behind him, the Yankees' next course of action was obvious. But once Piazza received his intentional walk, Bobby Valentine sent up his best lefty pinch hitter, Matt Franco, in Mora's stead. He'd later say his reasoning was that Rivera threw cutters, the pitch Valentine himself served up in batting practice every day.

Rivera's cutter was a little different from Valetine's, though, and Franco quickly found himself in an 0-2 hole. Rivera's third pitch came in right at the knees and certainly could have been called strike three, but home plate umpire Jeff Kellogg deemed it a ball. From the Yankees' dugout, Joe Torre scream THAT'S NOT LOW, but his opinion was of little consequence. Franco took full advantage of his stay of execution and laced Rivera's very next pitch into shallow right field.

Henderson scored easily, and Alfonzo raced toward the plate right behind him. Paul O'Neill heaved a throw to the plate, but it was just a hair too late to nail Fonzie, and the Mets had themselves a walkoff 9-8 victory. Franco was hoisted into the air by his jubilant teammates, a display of emotion that further rankled the button-down Yankees. You have to remember that back in 1999, not every walkoff win was celebrated like a playoff victory. But if any walkoff win deserved jumping and hollering and fist pumping, it was this one.

How unlikely was the Mets' win? Prior to Franco's hit, the Yankees had won 124 straight games in which they had a lead in the eighth inning. The Yankees had also belted 6 homers in this game, and in the previous 50 years, teams who hit 6 home runs in a game had a record of 214-15. And to top it all off, throughout all the insanity the Mets somehow managed to keep Derek Jeter hitless, something they'd never done before and have seldom done since.

Since the Matt Franco Game came on the heels of their exciting win against Roger Clemens, The New York Times went so far as to call this "The Greatest 24 Hours in the Mets' History." The Old Gray Lady admitted this characterization was a pure technicality, since none of the Mets' miracles of 1969, 1973, or 1986 had occurred within such a timeframe. Still, you'd be hard pressed to find a 24 period where more awesome things happened to the Mets.

There you have it, kids. That was the greatest Subway Series game of all time, and I don't wanna hear any guff otherwise, dagnabbit. And for more on Edgardo Alfonzo, consult your school library.