Join us as we dive back into the Prospect Mailbag to answer your questions about the Mets top minor leaguers!

It's been a while so let's delve back into the always exciting AA Prospect Mailbag! For anyone wondering, if you'd like your question to appear in the AA Prospect Mailbag be sure to send it to AAProspectMailbag@gmail.com post haste.

"Logan Verrett: Don't hear anything about this guy. Seems like a prospect. What's the story?"

Short and to the point; I like it. Well you are correct in that the Mets' 2011 third round selection out of Baylor University is indeed a legitimate prospect. For that reason we've covered him to a pretty good extent around these parts and in the interest of not duplicating efforts, here's what we've said:

"Logan Verrett features a standard four-pitch mix. He features a fringe-average fastball that sat in the 88-90 [MPH] range early in his Thursday start. He topped out at 91 [MPH] but saw his velocity erode a bit throughout the outing...The slider is his primary secondary offering, and he throws it a lot. It's a low 80's offering that, at it's best, features sharp, two-plane break."

Additionally, JP added notes on a surprisingly improved change-up as well as something of a show-me curveball.

"The 2011 third rounder has the type of polished college repertoire to dice up lower level hitters by hitting every spot with all of his pitches -- and he did just that in 2012. But while his stock ticks up based on very strong results in his debut, the main sticking point here is that Verrett saw his strikeout rate plummet from above nine [strikeouts per nine] in Savannah down to just over six for St. Lucie. While he showcased more velocity on his low 90's fastball than was expected, Verrett is still shorter on stuff for a right-handed starter -- and strikeout attrition before Double-A is not a great sign. The ceiling is still a back-end starter, but an eventual move to the bullpen is certainly foreseeable."

All told, our prior evaluations pretty much hold true today. Despite a mediocre fastball, Verrett is showing just enough in the way of command and secondary polish to dream on a potential back end starter at the major league level. However, as Dillon Gee is currently showing us, righties with poor fastball velocity aren't the best profile to bank on. For that reason the safer bet is to project Verrett as a potential impact middle reliever -- Jeff comped Luke Gregerson in the latest Amazin Avenue Audio podcast (where you can hear a lot more about Verrett) thanks to the so-so velocity and strong slider.

"Isn't it time for Phillip Evans to go back to extended spring training to get ready for the Brooklyn season while Gavin Cecchini replaces him in Savannah?"

Fair question. I mean, on the one hand Evans had a fine season at Brooklyn in 2012 -- and when I say 'fine' that's exactly what I mean. It wasn't outstanding or even that good. He batted .252/.328/.327 with a 101 wRC+; it was just fine. Certainly enough to warrant a promotion for a player that was recently considered a first round talent. 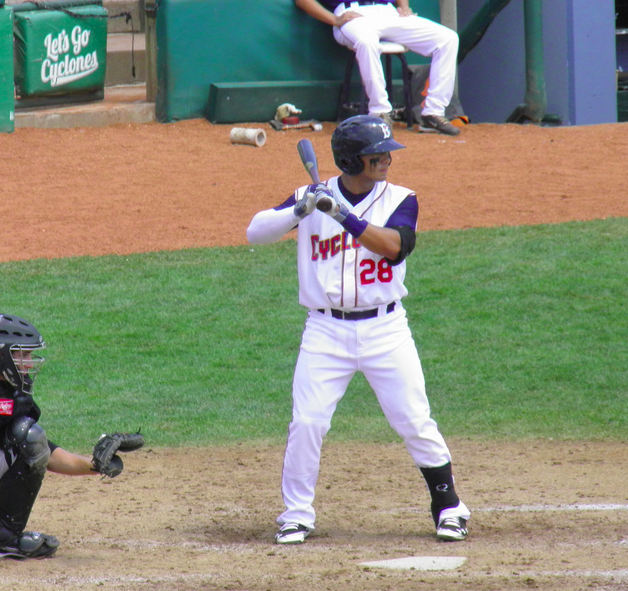 On the other, the 20-year-old has been downright abhorrent for Savannah thus far in 2013. He's currently batting .189 with a mere seven extra-base hits through nearly 50 games. His BABIP currently sits at .223; however, that is likely more a sign of consistently poor contact than bad batted ball luck. Strangely, his plate discipline remains pretty good, but this might just be one of those scenarios where the hit tool just isn't up to par with the rest of his approach.

Even worse, he's already amassed 17 errors at shortstop -- and this isn't one of those 'but Jeter made 56 errors when he played in the Sally League!' situations. Many had already questioned whether or not Evans even had the raw ability to man the position. Thus far he has not acquitted himself well.

In terms of a Cecchini-Evans swap, I'd still say that's not very likely -- mainly because of Cecchini. The club clearly made the decision that he'd be better served in extended spring training. Perhaps it was their conservative nature, perhaps it was something they saw that we are not privy to. In any case, they made the decision so I wouldn't expect them to change gears now.

That being said, should Cecchini prove, without a shadow of a doubt, that he is superior to his New York-Penn League competition -- something that is incumbent in the popular idea that Cecchini should have started 2013 in Savannah -- it's pretty clear that Phillip Evans will no longer represent a block at any point down the road.

"Mateo and Fulmer: I'd love to see an update on these guys, as they are two of the Mets' top prospects. Harder to hear anything about them than it is getting good info on Benghazi!

So may I suggest a once a week injury update for the minors?

It may just be caution, I am concerned about Mateo though, until I hear otherwise."

First off, thanks for the suggestion. After a relatively lucky 2012, the pendulum has swung back in the other direction in 2013 as the Mets have battled more than their fair share of injuries throughout the minor league ranks. For that reason, the idea of a weekly update is a pretty good idea. The issue with it, however, ties directly into my answer on Mateo and Fulmer.

In short, there's just not a lot of good information -- in terms of Mateo and Fulmer, but also speaking about the system as a whole. Jeff and I hit on this during the last podcast; the Mets tend to operate like a hockey team, in that they are often vague when it comes to reporting on player injuries. For that reason it makes it tough for guys like us to report regularly, beyond confirming that yes, player X is indeed still hurt then parroting the same nebulous descriptions -- which isn't very valuable to you, the reader. Again, good idea though.

Regarding those two pitchers specifically:

UPDATE - Never fails when you talk about a guy. Earlier this afternoon Mateo was activated and transferred back to the St. Lucie roster.

That's it until next time. Thanks, as always, to everyone who submitted a question this week. And once again, don't forget to send all of your Mets minor league questions to the AA Prospect Mailbag!