Share All sharing options for: Mets Daily Farm Report - 5/31/13: Mazzoni in the Zone, Flores Doubles Down

The 51s put up six runs in the first inning en route to an 11-1 victory Thursday night. Brandon Hicks and Brian Bixler hit first inning home runs and Josh Satin tacked on a bomb in the fourth. Wilmer Flores had two doubles, bringing his season line to .292/.335/.470. Chris Schwinden was able to effectively spread out 10 hits over 6.2 innings to get the win.

It was getaway day in Binghamton -- with a first pitch time of 10:35 AM EST -- and Altoona looked like they had packed their bags early, losing 6-4. The early start had no effect on Cory Mazzoni, who tossed six innings, striking out nine, and walking one. The stat line will show he gave up four runs but two of those were unearned on account of some shoddy defense in the second inning. The two earned runs were both solo homers. The nine strikeouts are a positive sign for Mazzoni, whose biggest knock coming into the season was that he didn't miss enough bats. Offensively, Cesar Puello continued to do his thing, going 2-4 with a hit by pitch, his 10th in 182 plate appearances. Puello's BB + HBP rate is 13.6%. That'll play. I just worry about him getting hurt taking so many fastballs to the body.

Rainy Lara made his Hi-A debut and it was a good one, going 8 IP, 4 H, 3 R, 1 ER, 0 BB, 4 K. He pitched to more contact than usual, which is to be expected after moving up a level. The zero walks is nice to see. Travis Taijeron provided the bulk of the offense with a two run shot in the second. Luis Mateo made a surprise relief appearance after being activated from the DL in the late afternoon yesterday.

This was a continuation of a suspended game from May 3rd. The bats came out hot, scoring in every inning after the re-start. Kevin Plawecki's two doubles, as well as Stefan Sabol's home run, came after the resumption. 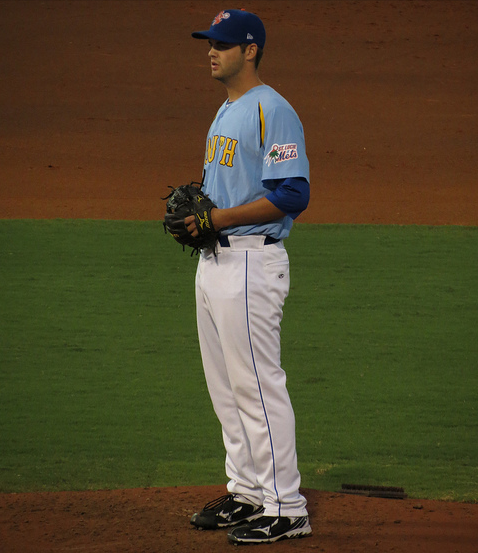 Cory Mazzoni gets the star after a night where he struck out a career-high nine batters against just one walk. The 23-year-old is currently posting a 4.35 through six starts with Binghamton.

I'm giving the horns to Matt Reynolds for his 0-5, one strikeout performance. He's underperformed my expectations to this point and I may also be dumping some residual anger onto him for the Mets' inability--or was it unwillingness?-- to sign Teddy Stankiewicz, who was also drafted in the second round last year. The front office certainly had high expectation for Reynolds, assigning him to Savannah last year and then St. Lucie this year.