Matt Harvey's eleventh start was among his best in an already impressive season.

In his eleventh start of the season, Matt Harvey had no trouble at all mowing down the Yankees' lineup on Tuesday night. If not for Marlon Byrd's error in the sixth inning, Harvey might not have allowed even one run to score in the game. In the three starts between his complete-game masterpiece against the White Sox on May 7 and Tuesday night's start against the Yankees, Harvey had a human 3.48 ERA. His return to dominating form was a welcome sight.

The pitch classifications here aren't entirely accurate, as Harvey throws a slider, not a cutter. Perhaps it says something about how well the pitch was moving that it got classified by Brooks Baseball as a cutter instead. And Harvey threw it far more than this changeup or curveball and generated an outstanding swinging strike percentage with the pitch. The slider he used to strike out Robinson Cano was one of the best pitches he's thrown in his young major league career.

Here's the plot of Harvey's pitches from the game: 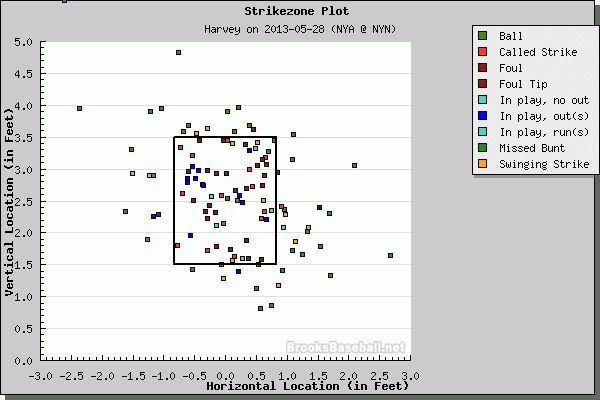 As has been the case in his past few starts, Harvey generated the majority of his swings-and-misses below or in the lower half of the strike zone. His fastball has still been excellent, but he's clearly using it to set up his off-speed pitches to generate strikeouts.

There's no question that Harvey is in the early running for the National League Cy Young award. Here's how he compares to the league's starting pitchers.

There are plenty of good pitchers in the league at this stage of the season, but Harvey's very close to the top in four of the five categories. He may not be the king of preventing walks, but no pitchers with a lower walk rate than Harvey's even comes close to his strikeout rate.

Harvey hasn't just been good by 2013 standards. His season is shaping up to join some of the Mets' all-time great pitching seasons.

The eleventh start of the year in each of these four seasons featured a boatload of strikeouts. Seaver had 16, Gooden had 14, Harvey, of course, had 10, and Dickey had 9. With the updated totals, Harvey's still pretty damn close to matching Seaver and Gooden at their very best.