Does a lack of walks necessarily mean poor plate discipline?

That’s right, Rob’s writing another story about Jordany Valdespin’s plate discipline. However, in case you missed it you can blame Steve Schrieber, who got this ball rolling again with his recent piece on the lack of progress the 25-year-old second baseman-turned-center fielder has shown in that regard. In it, he astutely points out that despite positive indicators leading up to this season, Valdespin’s walk rate has remained basically stagnant.

To his credit, Steve went on to point out that that fact alone doesn't tell the whole story:

"While his development has yet to manifest itself in taking more walks in the major leagues, it does seem early on that his pitch recognition has improved from where it was in 2012."

As Amazin’ Avenue’s de facto JV1 apologist, I – predictably – would love to take the baton and piggyback on Steve's point. In short, plate discipline does not necessarily mean walks. While each term certainly brings about thoughts of the other, the two are not mutually exclusive. Granted, the base on balls may very well be the most beneficial reason to exercise patience at the dish; however -- and this is likely your key takeaway from this piece (so pay attention!) -- a walk is not the only positive outcome that can occur when a hitter takes more pitches.

Is Jordany Valdespin an everyday player? 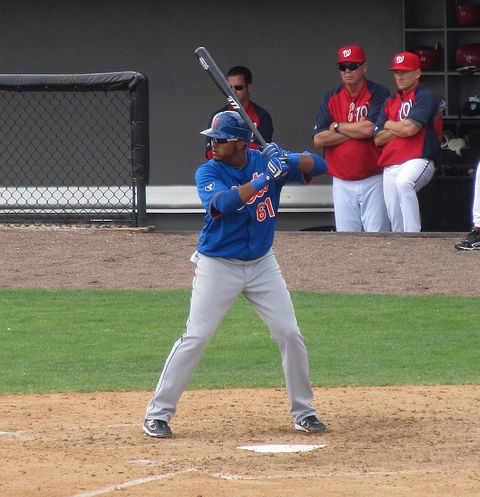 Catch up on our pre-season look at whether or not JV1 deserves an everyday role.

In fact, even just the specter of the walk can generate a positive outcome for the batter in these circumstances. That is, as a batter forces the pitcher to extend a plate appearance by being more selective, the end result inches closer and closer to a free pass. Especially in the case of a two or three-ball count -- a so-called ‘hitter’s count’ -- the pitcher will give in, so to speak, by throwing more fastballs for strikes in order to avoid the dreaded walk. As the great majority of hitters produce superior results against old number one, this is a already a small victory for the guy standing in the batter’s box. The victory is made larger when you consider that not only do hitters have more success against fastballs, they really thrive when they know a fastball is coming -- again, in a 'hitter's count'.

Let's apply this logic to Jordany Valdespin. I’ve been ranting and raving about El Hombre's increasing patience at the plate for almost a year now. Yet, as Steve pointed out, his walk rate has barely budged. What gives? Well, as the saying goes, the leopard cannot change its spots. It has happened before, yes; Jose Reyes for example. However, to expect such remarkable progress on a regular basis would be folly -- but that doesn’t mean I’ve been ranting and raving for nothing.

Instead, it’s more instructive to acknowledge what growth is being made -- even if it isn't as sweeping as we would hope. Steve has already shed some light on the 25-year-old's burgeoning pitch recognition and contact ability in 2013. He then pointed out that this growth is likely a cascading effect from seeing a lot more pitches in 2013, so let's drill in on that. 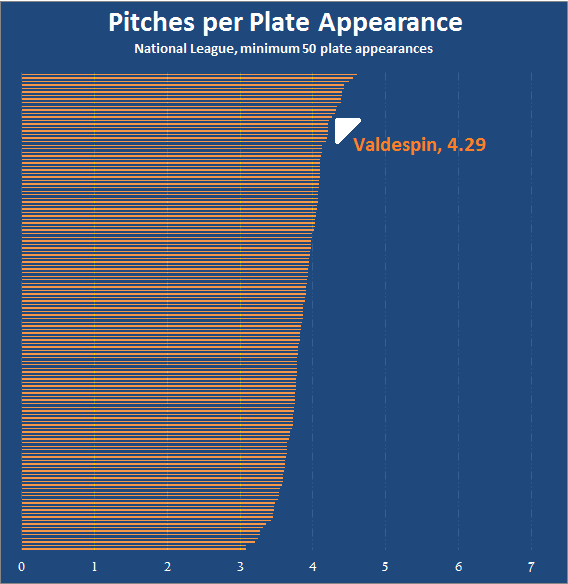 Obviously a roughly 0.5 pitch difference between Valdespin in '12 and '13 doesn't seem like a ton on the surface, but keep in mind that over the course of a full season of plate appearances that's upwards of 200 additional pitches seen. As previously stated, that means longer, deeper at bats that push each and every one closer to base on ball status. And based on our prior logic, what we would hope that means is that Valdespin should be seeing more fastballs. So is he?

Last season, Valdespin saw a composite average of 60.20% fastballs; that included all flavors of fastball, i.e. four-seam, two-seam, cutter, sinker, etc. Thus far in 2013, Valdespin has seen 63.16% fastballs -- meaning that our hypothesis indeed bears out. Again, the approximate 3% difference might not seem like too much; however at his current pace, that extrapolates to over 50 more fastballs -- and 50 less breaking pitches -- that he'll face in 2013. 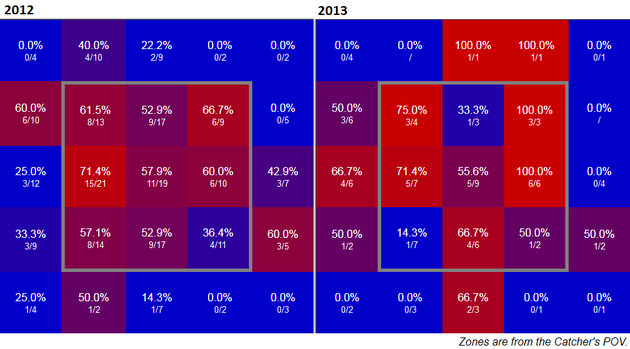 As you can see above, there is a lot more deep red this year. Last season, Jordany Valdespin batted .460 against fastballs; in 2013, he's hitting .500 against them. The findings become even more stark as we parse the results:

No surprise -- Valdespin clearly gets pretty healthy against fastballs. However, just as we surmised, he's really doing damage against heaters this season, in pretty much any hitting zone. Perhaps the most telling shift is the success he's having against fastballs outside of the strike zone -- something we might expect if he knew a fastball was coming (i.e., fastball count). That seems to go hand-in-hand with Steve's finding about Valdespin's spike in contact rate this season. The only area where he's taken a slight step back is on outside fastballs.

In short, while his walk rate remains mostly stagnant, the 25-year-old lightning rod is indeed making progress with his plate discipline. Does that make him an everyday player? That depends on who you ask -- many still prefer the pinch-hitting wiz in a role off the bench. However, one thing is clear: When we unpack all of our biases and preconceptions about his polarizing persona as well as his aggressive style of play, what we're left with is a very interesting player.