*All results from games played on Monday, May 6th 2013

Las Vegas and Sacramento had their game suspended due to rain.

Welp, not much to see here. Cory Mazzoni struggled with his command in his first start back after missing three weeks with some vaguely-defined elbow soreness, and the B-Mets offense managed just two hits. Not a winning combination.

Hansel Robles returned to the St. Lucie rotation with arguably his best start of the 2013 campaign. The former male-model-turned-pitching-prospect struck out five and allowed just two baserunners in his five innings of work. The rest of the St. Lucie arms also acquitted themselves well, notching ten strikeouts on the evening and holding down a Daytona line-up that included some sexy prospect names like Javier Baez and Jorge Soler. Aderlin Rodriguez powered the Mets offense as he continues to thaw out from an ice-cold April. The slugging "third baseman" has now posted a .282/.341/.513 line and a much more palatable 6:4 K:BB ratio over his last ten games. Throggs Neck's own T.J. Rivera also added a very pretty looking 5-5 to the box score.

Not a great day for the Gnats. They managed a two-out rally in the top of the seventh in Game One to force extra innings, but Phillip Evans turned a Joey Gallo pop-up into a double and then committed a walk-off fielding error. In Game Two, the Crawdads got to Luis Cessa early with a pair of bombs, and Hickory set the last ten Gnats down in order to quell any chance of additional late-inning heroics. The Gnats maintain a slim half-game lead over the Rome Braves who had both their scheduled games rained out. 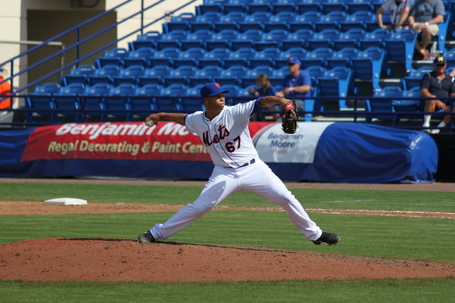 Hansel Robles clocked in at #28 on this year's Amazin' Avenue prospect list.

Aderlin Rodriguez gave him a run for the crown, but let's go with Hansel Robles, who is so hot right now.

Walk-off error is a good way to find yourself in this space, so sorry Phil Evans.