Looking at Matt Harvey's red-hot season after his dominating performance against the White Sox last night.

Matt Harvey nearly threw a perfect game last night against the Chicago White Sox at Citi Field. It was fitting that the only player to reach base against him did so on an infield single, as Harvey was filthy from the outset. Chicago came in with a struggling offense, and Harvey's season was already off to a fantastic start. Harvey did not disappoint, mowing down the opposition with seemingly little effort and, at least in the first inning, a visibly bloody nose.

Thanks to the incredible Brooks Baseball, here's how Harvey used his pitches against Chicago last night. The data shows the pitch type, average speed, maximum speed, number of times each pitch was thrown (count), and the strike and whiff (swing-and-miss) percentages for each pitch.

Of the 16 swinging strikes Harvey generated, 5 came via his changeup, which is awfully impressive. So is the fact that he threw all of his pitches for strikes so consistently, particularly his relatively slow curve, which doesn't even look fair when he mixes it in with the other three.

Also via Brooks, here's a plot of Harvey's pitches from last night: 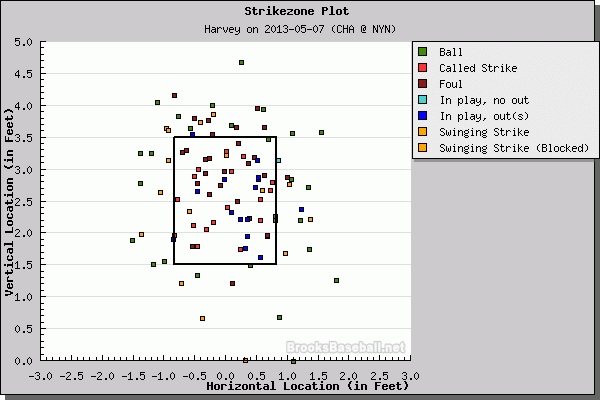 As usual, Harvey worked heavily in the upper half of the strike zone. He rarely missed the strike zone, but when he did, the result was often a swinging strike.

Through seven starts, Harvey has been just about as good as it gets. Here's how he ranks among National league starting pitchers:

Only Jake Westbrook has a better ERA than Harvey, and Adam Wainwright's 1.89 FIP just barely edges him out for the league lead. It's also worth noting that Harvey's allowed just 4.01 hits per nine innings, the best mark in baseball among starting pitchers. Five other pitchers have allowed 5.50 or fewer hits per nine so far in 2013, and the single-season record is held by Nolan Ryan, who allowed just 5.26 hits per nine in 1972.

Let's compare Harvey's first seven starts to the first seven starts in three of the Mets' Cy Young award seasons: Tom Seaver's 1973, Dwight Gooden's 1985, and R.A. Dickey's 2012. Seaver won two other Cy Young awards with the Mets and perhaps had his best year in 1971 despite not winning the award. But 1973 was the best of Seaver's Cy Young seasons so we'll stick with that, like last year, for the sake of this comparison.

Harvey is very unlikely to come anywhere close to the innings pitched totals of Gooden (276.2) and Seaver (290.0), but given the way starting pitchers are used in baseball today, that's not a knock on him. In terms of everything else, it's fair to say that Harvey's been better.