Remember the nice little pitching duel we had the other day? Yeah, not happening last night. Before the 51s even went to bat, they were down 5-0. Carlos Torres struck out the first batter he faced, but promptly allowed four consecutive singles and a Jim Adduci three-run homer to put Las Vegas in a huge hole. The Express would score another run in the 2nd, and three more in the 5th inning. The 51s didn't exactly go quietly into the night. With one out in the bottom of the 6th inning, Wilmer Flores hit a triple. Yes, you read that right. After Eric Campbell walked, Zach Lutz launched a home run to centerfield, scoring three runs. In the bottom of the 7th, Kirk Nieuwenhuis pinch hit for Collin Cowgill and also went yard. In the bottom of the 9th, a walk, single and double chained together scored another run. It was just too little, too late, and Las Vegas fell below the .500 mark for the season once more.

Logan Verrett took the mound for Binghamton and spun a gem of a game, but the story last night was all Cesar Puello. The 22-year-old came into the game carrying a 14 game hitting streak, and needed a hit to not only extend this streak, but tie his career best hitting streak, set in 2010 when he was still playing with the Savannah Sand Gnats. When he came up to bat in the bottom of the 2nd, he rocketed a ball 400 feet plus, over the center field wall for a home run, his second in as many nights. Not satisfied, when he came to bat in the bottom of the 5th, he smashed another home run to left field. Those three runs were all that the B-Mets scored, but they were also all they needed. Back to Verrett, the right-hander was stingy dominant, allowing only one run over eight plus innings. He needed fewer than 100 pitches to make it to the 9th inning, and notched two of the three outs in the inning, but was removed one out away from a complete game as Jeff Walters was brought in to get the final out- he did, notching his 9th save of the season.

Yesterday afternoon, St. Lucie won their 5th game in a row, just squeeking past the Daytona Cubs in extra innings. In the bottom of the 10th, Aderlin Rodriguez laced a line drive into centerfield that plated T.J. Rivera, who got on base earlier in the inning after being hit by a pitch. Alex Panteliodis started the game for the Mets, and while he didn't exactly shine, he kept his team in the game, allowing only two runs, one of which was a home run by Cuban prospect Jorge Soler. The St. Lucie offense scored early and often, scoring in the 1st, 3rd, 4th and 5th innings. Matt Reynolds, Aderlin Rodriguez, and Robbie Shields all hit a home run apiece. In the top of the 8th inning, with Hamilton Bennett working his second inning of relief, Daytona loaded the bases and scored two runs on a Dustin Geiger single, tying the game. Frank Francisco came in a pitched a clean 9th, though the two walks he allowed is somewhat disconcerting. Randy Fontanez pitched around a Javier Baez single to retire Daytona in the top of the 10th, and Aderlin came up big in the bottom of the inning, ending the game and completing the four-game sweep. St. Lucie will look to continue their run against Palm Beach Cardinals tonight

Travis Taijeron was named Florida State League Player of the Week (April 29th to May 5th). The 24-year-old hit .474/.600/.947 during the six game span, including one home and six doubles. 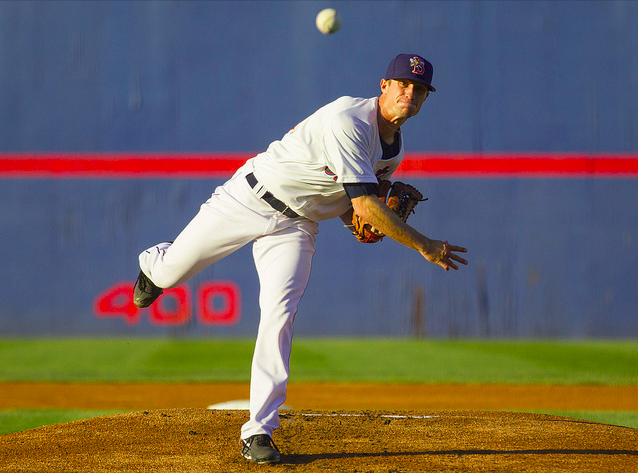 Cesar Puello and Logan Verrett are going to share the Star of the Night accolades for their performances yesterday. They literally won Binghamton's game last night by themselves- Puello registered all of the B-Mets' runs on the strength of his two home runs, and Verrett came within one out of pitching a complete game, allowing one run while striking out a season high nine batters.

Carlos Torres gave up nine runs in the four innings he pitched. Sure, three of those runs were inherited runners that Dylan Owen let score, but even if you ignored those, giving up six runs in four innings is still ground for being the Goat of the Night. Travis Taijeron, who had a Golden Sombrero on the day he was named FSL Player of the Week, is lucky that somebody outdid his futility on the field.