Look, a lot of stuff happened yesterday. Unfortunately for you, gentle reader, it's Jeffrey's day to recap the news, so...

Seven more games with the Marlins this year. I am pretty sure I will be watching none of them. At least it wasn't six hours this time?

Of course the big news came after the game, as Ike Davis, Mike Baxter, and Robert Carson were all optioned to Triple-A Las Vegas. In their place will be the newly promoted Josh Edgin, Collin Cowgill, and...

Okay, you are probably expecting me to have some sort of outsized reaction to the news that a certain first baseman in Las Vegas with very thick eyebrows has been promoted to the major league roster, potentially to be the everyday first baseman. Folks, this is a professional operation we run here at Amazin' Avenue, and the Morning News is neither the time nor the place for some sophomoric hooting and hollering. It is the place for cold, hard journalis...aw, screw it.

So yeah, that happened.

To properly prepare you for the Josh Satin era, circa 2013, here is every Josh-Satin-related video highlight in the MLB.com archive. That's not enough for you? Of course it isn't. Here's all the MiLB.com ones too. And here's a song to get you pumped up. You probably already know the chorus. (hint: it's featured prominently above)

Finally, a photo of Josh Satin awkwardly doing the claw after a two-run double in 2011: 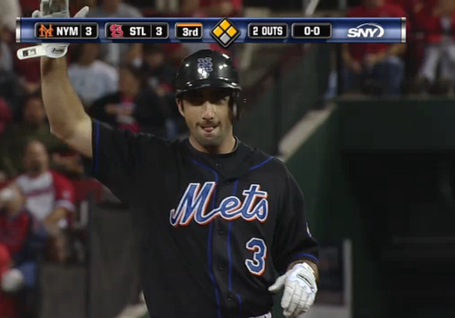 In the interest of at least preserving the appearance of propriety in this space, here's an actual journalist writing about this news.

Here's some more good news that is probably more interesting to our readership. Matt Harvey's butt is fine! Fine as in healthy, I don't feel particularly qualified to comment on its relative attractiveness. This could mean a potential Wheeler/Harvey double-dip in Atlanta next week. I do feel qualified to comment on the relative attractiveness of that. And it's hott, two 't' hott.

I don't know why you would want to be reminded of Saturday's 20-inning debacle, but Greg Prince is always a good read.

And perhaps you've been getting excited at the prospect of the Mets spending some real money this coming offseason with all the money coming off the books this fall. Well...

Brock Mahan looked back at Old Timer's Day, which is a thing the Mets used to do. Can't do it now, because Ron Swoboda might show up the current Mets outfield.

Here's Fish Stripes' take on yesterday's game. They must be licking their chops every time they see the Mets on the schedule.

With a win yesterday, the Braves split their four-game set with Los Angeles. Now they just need to decide how to shuffle their rotation.

I'd make fun of the Phillies for losing to the Brewers again, but at least they've figured out how to beat the Marlins. They've also lost Erik Kratz for a bit. Which might be a problem since every time I see his name and/or face, he seems to be hitting a home run.

Here's all of Sunday's action in one handy dandy scoreboard.

Jeff Sullivan once again brings us the wildest swings and pitches from last week.

And Grant Brisbee tells you what recent draftees you should root for. Unsurprisingly, Amalano Fukofuka is on the list. Dammit Brisbee. I do like that there are two Tommy Milones now though.