The Mets drafted FGCU righty Ricky Knapp in the eighth round. He's the son of a pitching coach and brings much pitchability to the table despite being light in the stuff department.

The Mets used their eighth-round selection on Florida Gulf Coast righty Ricky Knapp. While Knapp doesn’t offer an incredibly high ceiling or premier stuff, his knowledge of the craft creates a sort of gestalt effect whereby he succeeds beyond expectations. 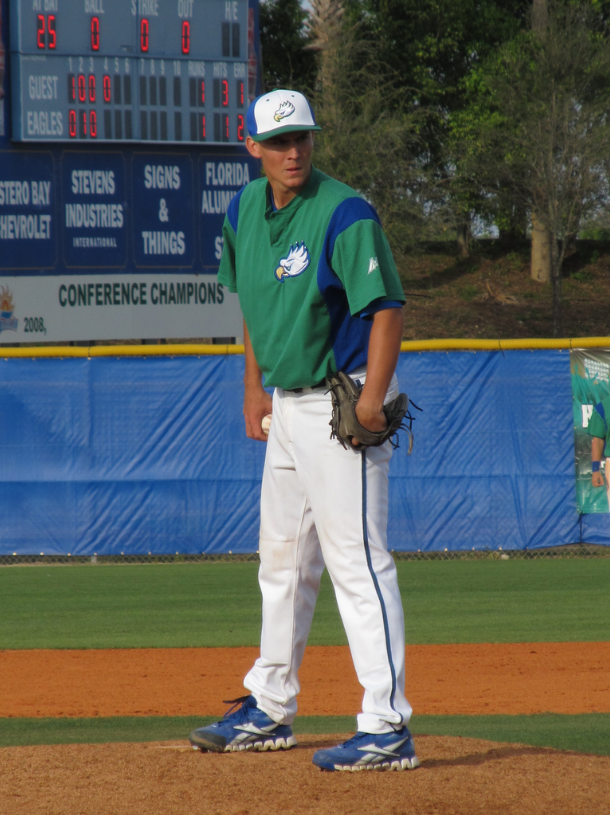 At just 6 feet and 200 pounds, you wouldn’t expect Knapp to have a big fastball, and he doesn’t. At its best, it’ll touch 93, but he most typically sits 86-90, adding up to below average velocity for a right-handed pitcher. However, the pitch plays up because of good command and the ability to add and subtract velocity as he needs. It’s not a great pitch in and of itself, but the way he uses it is quite impressive and rare to see from an amateur player.

His secondary stuff isn’t terribly impressive either, but he commands it well. His best pitch is a changeup that he hides well and has a little bit of tail to it. I’d call the pitch about average. He also brings an average slider which has both tilt and depth and a slower curve. Much like Zack Wheeler does, he often changes his arm speed and arm angle to give the breaking pitches different effects. Finally, he’ll also throw a cutter to give him an extra look against lefties. While none of these pitches is a true out pitch, he mixes them into his repertoire well to keep hitters guessing.

And I simply cannot stress enough how refined a pitcher Knapp is. His father is Rick Knapp, the former Tigers pitching coach and current Dodgers assistant minor league pitching coordinator. Ricky’s been learning how to pitch from a professional coach his whole life, and it shows. He has a tremendous feel for pitching, with a deep knowledge of pitch selection. He needs some work on his command still--sometimes he catches too much of the plate--but some pitchers never learn what Knapp has already shown an affinity for.

Mechanically, he’s clean, as you’d expect. He pronates early, takes a big stride, has a firm glove side, just needs to watch his timing sometimes. I was very pleased to see Knapp still sitting there in the eighth round, and I like his chances at becoming a solid back-of-the-rotation starter, even though I’d normally call a pitcher with his stuff and size a potential middle reliever. His lack of unhittable heat will likely keep him from ever becoming a star, but he has a good chance of moving quickly and helping out the club in the rotation at some point in the future.