Zack Wheeler will make his major league debut for the Mets this Tuesday in Atlanta. Here's a preview of what to expect.

So Harveeler Day (or whatever portmanteau you prefer) is finally here. Zack Wheeler was the consensus #1 Mets prospect coming into the 2013 season, and after some Super 2 machinations is finally ready to debut in the orange and blue. So before you go and overreact to whatever happens today and add your name to @_mistermet's retweet vault, here's a quick primer to get you up to speed.

What he does well right now

Wheeler's fastball is a mid-90s heater with good armside run. He's touched 98 with it when I've seen him and reportedly has hit 99 in Vegas this year. The pitch is his bread-and-butter offering and a serious weapon. Fastball velocity isn't everything of course, but it is a carrying tool, and Wheeler's fastball is arguably the single best pitch in the system. He can change eye levels with it and get swings and misses up in the zone. One thing to keep an eye on is how he uses it against left-handed batters. When I saw him last year shortly before his promotion to Buffalo, a scout noted that he had issues locating his fastball gloveside, that is, inside to lefties. It could be due to the natural run on the pitch, but it's something I've kept an eye on since then, and Wheeler does seem to be more comfortable working southpaws away with the fastball.

I saw Wheeler twice last year. At the beginning of the year the curve looked better than the slider. By July, the slider was a clear plus pitch to me. I've seen some evaluators put higher grades on the curve since then, but I think I still prefer the slider. It's a high 80s monster- and like Harvey's can touch the lower 90s- with classic, late two-plane break. Also like Harvey's, the velocity makes the average movement on the pitch play up. This is something Josh Smolow (garik16) has drummed into my head during his various appearances on my various podcasts: Velocity matters on more than just the fastball. While the movement on Wheeler's slider may not stand out, it's thrown so hard that the batter just has less time to read and react. The curve is a low 80s 11-5 breaker. Again, there are evaluators, Jason Parks most notably, who see it as the superior secondary offering and grade it a clear plus pitch. For his part, Wheeler has appeared to use it as his primary offspeed offering in Vegas, at least in the starts I've watched. I do think at this point he commands the curve better than the slider, but keep in mind I do have a slider bias in general when evaluating pitchers.

What he doesn't do so well right now

Locate his fastball down in the zone.

I could have written close to this same exact primer for Matt Harvey when he was called up last Summer. Like Harvey, Wheeler lives up in the zone with his fastball a little bit too much. It remains to be seen if he can have close to the same success Harvey has had with his fastball out over the plate, but I wouldn't bank on it. Major League hitters can square 95 in the zone, so Wheeler may have to refine his fastball command on the job. The stuff is good enough that he will be able to out-pitch command issues some of the time, but not all the time.

Wheeler's mechanics/injury risk were the topic of a recent e-mail segment on Amazin' Avenue Audio, but to sum up: Although his mechanics are not ideal, he's probably no more of an injury risk than any other pitcher. However, Wheeler has had issues with his delivery this year, specifically with staying closed long enough. This is something that was more noticeable earlier in 2013, but merits continued attention as Wheeler's delivery has more moving parts than say, Harvey's. And as Toby Hyde points out in the linked piece above, Wheeler has tinkered with his mechanics regularly. When those mechanics are out of sorts, he has major problems throwing his fastball for strikes.

Start his breaking balls in the zone/Consistently throw them for strikes.

This was less of an issue in the Eastern League, where Double-A hitters have more of a penchant to chase, but I've noticed that recently Wheeler has had some issues getting swings and misses with his breaking balls against the more disciplined hitters in the Pacific Coast League. Wheeler tends to run into problems when he has to come in with his fastball behind in the count (which granted, is true of all pitchers, but especially ones that struggle at times with fastball command), so learning how to get strikes, either swinging or looking, with his offspeed stuff early in counts will be key.

Show you a major league changeup.

There is a major league changeup in there somewhere, don't get me wrong. It just doesn't come out that often. When it's in the 86-88 mph range, it can show good armside fade. But it's often too firm, and Wheeler doesn't do a great job of disguising it with his arm action. As a result it's often easy to lay off, or worse, batting practice. He also tends to use it very sparingly, and perhaps as a result has shown a bit of a platoon split, especially when it comes to slugging, in the minors. Harvey of course had a mediocre change at the time of his major league promotion, but he very quickly developed an average one. Wheeler will need to at least need to show a good enough one to keep it in lefties' minds, even considering the strength of the other clubs in his bag. Emphasis on the changeup seems to be a hallmark of Dan Warthern's tenure as Mets pitching coach, so we'll see if he can squeeze a decent one out of Wheeler.

Another thing to keep an eye on

How does Wheeler look over the long haul, both in-game and the rest of the season?

One of my lingering concerns with Wheeler as a prospect has been whether his stuff will hold up over 100+ pitch outings and 180+ inning seasons. At times he has begun to labor later in outings when his pitch count starts to tick up. The fastball loses some life, and the breaking balls flatten out. Baseball-Reference doesn't have minor league inning-by-inning splits for his minor league career, but anecdotally, it feels like Wheeler tends to run into trouble when he gets deeper into in his starts. He's a bit lanky compared to Harvey, and although he has always taken his turn throughout his minor league career, I want to see him go deep into games at the major league level and see the stuff hold up. It's the kind of thing you can't really get a feel for in the minors due to stricter pitch counts and innings limits. 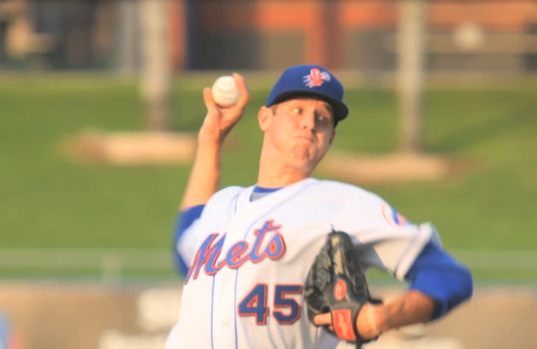 I considered just copying and pasting my projection for Matt Harvey after his call up last year. As last night's SNY chryon helpfully pointed out, they were very close to the same pitcher at the time of their major league debut. It's unlikely that Wheeler has the extra gear that Harvey showed right away, if only because it is unlikely any pitcher is immediately that good at the major league level. I expect Wheeler to have a high variance half-season. For every six inning start with eight strikeouts, there will be a four inning outing where he walks five and gives up a three-run homer. Or to put another way: He'll have starts where he looks like Jose Fernandez, and starts where he looks like Kevin Gausman. Hopefully we won't overreact to either type.

This isn't to say to say that Wheeler's not ready for major league baseball, just that he will have to learn some things on the job. This is true of most high level pitching prospects. A few examples:

Those are the first fullish major league seasons for David Price (A), Clayton Kershaw (B), and Justin Verlander (C). Not that any of the three were particularly bad, but they did not immediately dominate major league hitters. Wheeler has the present-day tools to get major league hitters out, but he's probably not ready to be ZACK WHEELER quite yet. Kershaw's projection looks most likely to me: an above-average K rate coupled with control issues. I do think he will give up a few more home runs than Kershaw as well, which might push his FIP more towards 4.50. (as for his ERA, your guess is as good as mine, but you've seen this Mets defense, right?)

Now this primer may feel a bit eeyorish to you, but keep in mind that the talent jump from Triple-A to the majors is the largest in organized baseball. Wheeler has the raw stuff to handle the jump, with three potential plus pitches, and an idea of what he is doing out on the mound. He will need to refine what he has in order to have sustained success, and that will take time and major league reps.