What better way to celebrate Matt Harvey Day than an overview of his past three starts?

It's been three starts since the last installment of the Matt Harvey tracker, which means this installment features a lot of data. On Harvey-Wheeler Day, though, that's probably not a bad thing.

Over his past three starts, Harvey put together a 2.84 ERA with 18 strikeouts and 3 walks in 19.0 innings of work. His 12th start of the year, which came in Miami, was his worst of the season, but he bounced back very nicely against those same Marlins in his 13th. And he was excellent against the Cardinals in his 14th.

Harvey didn't generate anywhere near the usual number of whiffs in this start as he usually does. Neither his slider nor his curve generated a swing-and-miss, a rarity in his starts this year. As the plot below sows, Harvey worked well wide of the strike zone and didn't throw many pitches just above it. 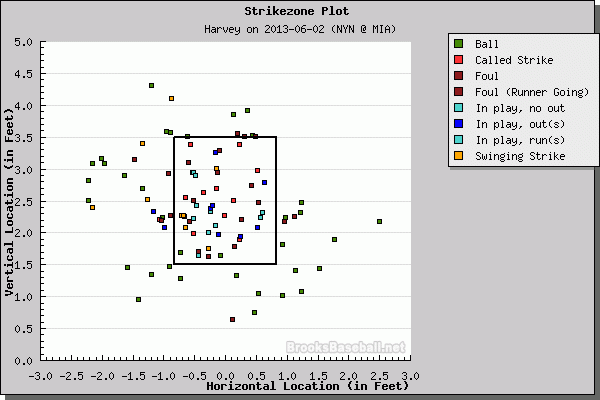 Harvey's start at home against the Marlins went much better. He generated swings-and-misses on each of his pitches, and in this start, he all but abandoned the changeup, a stark difference from the start before. His strike zone plot below looks a lot more like a typical Harvey start, too. 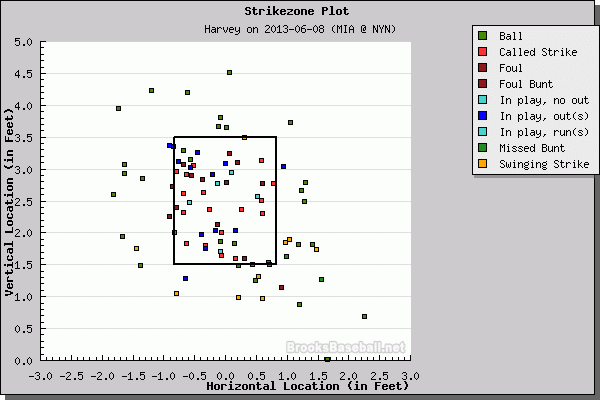 Harvey strikes out Chris Coghlan. More GIFs from this start via Joel here.

This was a fastball-heavy start from Harvey, as he brought the changeup back into the mix a bit but rarely used his slider. His curve was particularly nasty; most pitches don't generate swinging strike rates north of twenty even in small samples. And Harvey's plot below once again looks great. 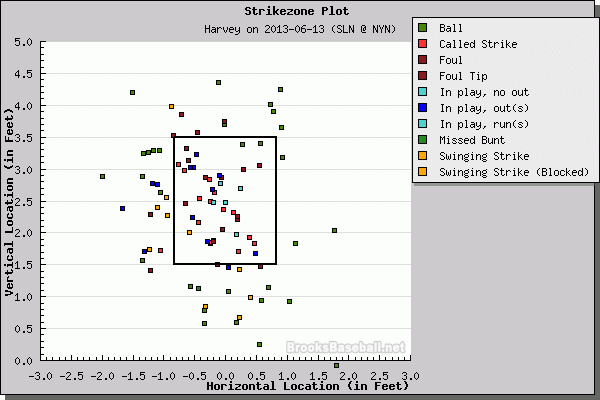 As the season near its midpoint, Harvey is still very much in the running for the National League Cy Young award. His competition includes Clayton Kershaw, Adam Wainwright, Shelby Miller, and Patrick Corbin, among others. It's pretty, pretty, pretty good company.