Jake deGrom (see below) started for the 51s and his start went much more swimmingly than one might have expected, based on the numbers he put up in his ten starts Binghamton this season. He worked around eight hits and two free passes in five plus innings of work, allowing only one earned run. The Vegas offense scored in the top of the 2nd, but deGrom gave up his only run in the bottom of the inning, tying the game. The 51s scored another run in the top of the 6th, but Justin Hampson gave it right back in the bottom of the inning, tying the game. Finally, in the 7th inning, one of the two teams scored some unanswered runs. Unfortunately, it was the Tucson Padres that did, putting up a three spot. The 51s had no answer, and dropped another one.

Nothing to necessarily read into here, as this move is more roster maintenance than anything. Optioning Wheeler down to Triple-A Vegas allows the major league club to carry an extra player until his next scheduled start.

Jacob deGrom going from Binghamton to Las Vegas with Zack Wheeler, Collin McHugh and Carlos Torres all out of 51s' rotation. #mets

This marks deGrom's second promotion in only a few months. The 24-year-old began the season in High-A St. Lucie, building on the four successful starts he made there in 2012. After only two starts, the Alderson regime chose to promote the right-hander to fill the void left in the Binghamton pitching rotation after Luis Mateo hit the DL with elbow troubles. There, he would make 10 underwhelming starts in Binghamton, pitching 60 innings with a 4.80 ERA, 20 walks (3 BB/9), 44 strikeouts (6.6 K/9), and 69 hits allowed (10.4 H/9). deGrom's promotion seems more about filling the 51s pitching rotation with able bodies more than anything else.

The Stone Crabs jumped out to an early lead, scoring unanswered runs in the 1st and the 3rd. But with in the 4th and 5th, St. Lucie took a 3-2 lead. The lead wouldn't last long, as reliever Estarlin Morel had a rough go of it, giving up two unearned runs in the 6th and two earned runs in the 7th. Down by three runs, Dustin Lawley tied the game with one mighty swing, sending a Lenny Linsky offering over the centerfield wall. Randy Fontanez and Hamilton Bennett succeeded in shutting the Charlotte offense down long enough for the offense to get something going, as Lawley once again came through in late innings, swatting a double into left that scored T.J. Rivera.

There were no scheduled games last night, due to the South Atlantic League All-Star Game, being held in Lakewood, New Jersey. A handful of Sand Gnats- Brandon Nimmo, Kevin Plawecki, Jayce Boyd, Beck Wheeler, and Bret Mitchell participated, as the Southern Division took on the Northern Division, and lost 2-1. Yours truly would have also been there, had some other stuff come up. Such is life. 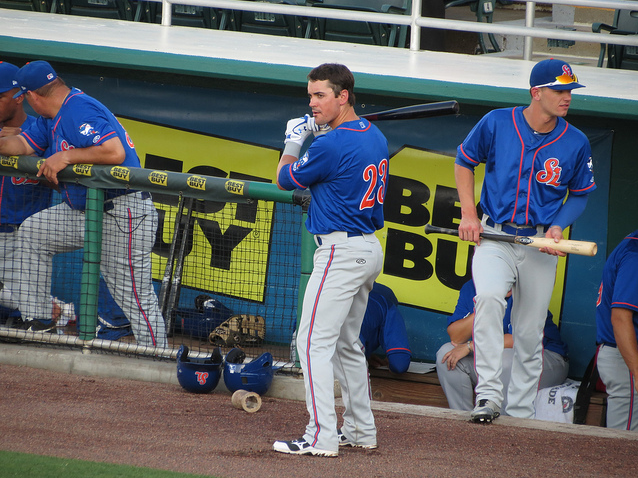 Matt Reynolds was drafted in the 2nd round of the 2012 MLB Amateur Draft (PHOTO CREDIT: Bryan Green)

While Dustin Lawley had the heroics down pat, Matt Reynolds is the Star of the Night. He just missed the cycle, and it wasn't one of those situations where he "just missed" the cycle by missing the triple, or the home run- all the shortstop needed was the single.

There were no particularly bad performances last night worthy of Goat of the Night dishonor.