Catch up on all the news and notes from the Mets minor leagues!

The 51s came roaring back with three runs in the bottom of the eighth to take a 7-5 win from Tucson Thursday night. Ike Davis was the star, smacking his first two home runs since being demoted and also adding a double. I feel like we're going to play this game every day so here--Ike is now hitting .306/.457/.583. Clearly he must be fixed. Is the sarcasm font only for the comments section? In all seriousness, this is a good sign. Rafael Montero was on the hill for Vegas and he was solid, striking out seven and walking two over five innings.

Allan Dykstra has an elite skill--the man can draw a walk. That skill was on display Thursday when he walked with the bases loaded in the seventh inning to force in the go-ahead and--as it turned out--winning run. He tacked on another walk and is currently sporting a triple slash of .319/.471/.611, which is ridiculous. It's hard to get too excited about a 26-year-old in AA but, I mean, dang. Cory Mazzoni was good in this one as well, striking out eight and walking one in six innings. He now has 34 strikeouts and just 6 walks in his last 24.2 innings. I would not be surprised if Mazzoni started some games for the 2014 Mets.

ROSTER ALERT: Kevin Plawecki, Jayce Boyd, and Bret Mitchell were all present for this one, having been promoted from Savannah. Rob wrote about the promotions here.

The St. Lucie bats--infused with new blood--were excellent, scoring eight runs on 12 hits for an 8-6 win. Kevin Plawecki--who hadn't homered since May 24th--knocked one out of the ballpark in his first at-bat in Hi-A. He finished the night 2-5 with four RBI. Jayce Boyd had two singles and finished 2-5 as well. A rehabbing Matt den Dekker was 2-4 with a walk. Matt Reynolds had two hits for his fourth multi-hit game in his last five.

Fresh off the all-star break and sans their best bats, Savannah continued its winning ways with a 5-1 victory. Logan Taylor started for the Sand Gnats and was excellent, allowing one earned run over six innings while striking out nine and walking two. Since returning on June 4th, Taylor has gone 15.2 IP, 9 H, 3 ER, 6 BB, 20 K. The recent promotions have gutted this lineup. Hopefully someone can emerge in the second half so that there is something to get excited about other than Brandon Nimmo.

Brooklyn shutout the Aberdeen IronBirds (seriously, minor league teams have the weirdest names) behind a strong pitching performance from John Gant--who tossed five scoreless, striking out six and walking two. The 20-year-old Gant was drafted out of high school in the 21st round of the 2011 draft. 2012 first round draft pick, Gavin Cecchini, collected his first hit of the season and also drew a walk. LJ Mazzilli hit safely for the third straight game. Recent signee, Jared King, made his debut a memorable one with a double, a walk, two runs scored, and an RBI.

Kingsport kicked off its season with a 9-3 loss Thursday night. Lots of unknowns in this lineup. There are a few notables, the most prominent of which is Amed Rosario, who was signed out of the Dominican Republic for $1.75M last July and came into the season as our #20 prospect. Rosario is just 17 years-old and is playing against players who are much older than him, so expectations should be tempered. 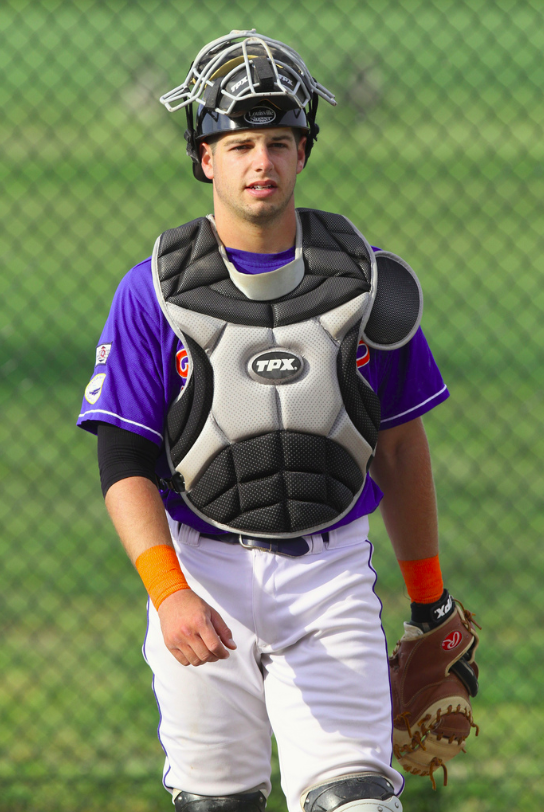 The 22-year-old Plawecki was the 13th ranked prospect on the AA preseason top 50.

Kevin Plawecki locked this up early in the evening when he homered in first at-bat after being promoted to Hi-A St. Lucie. He's been really cold of late, perhaps the change of scenery--and more conducive run-producing environment--will get Plawecki back on track.

You might think Ike Davis deserves this spot but I will not hand out a star to a demoted major leaguer who is supposed to be a part of our core and who instead has caused us so much frustration and disappointment this year.

Let's give the horns to Domingo Tapia--who has failed to break out this year--for his 5 plus inning, 11 hit, 6 earned performance. He is firmly entrenched in my dog house.