Mets vs. Phillies Recap: Hefner makes a pitch for keeping his rotation spot in a satisfying comeback win

Jeremy Hefner overcame a rough start and some shoddy fielding to beat the Phillies in one of his better starts of the season so far.

Share All sharing options for: Mets vs. Phillies Recap: Hefner makes a pitch for keeping his rotation spot in a satisfying comeback win

You could forgive a little pessimism on the part of the Mets coming into tonight's game with the Phillies. Hours before first pitch, the team learned that Jon Niese's rotator cuff is partially perforated. On the field, they'd be facing a squad that had beaten them handily in five consecutive matchups and relying on the right arm of Jeremy Hefner to stop the skid. For those who've (thankfully) it blocked it from their minds, when Hefner last faced the Phils, it did not go well. 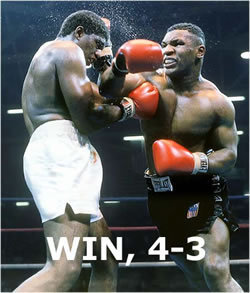 Early on it seemed tonight's game was headed in a similar trajectory. Hefner escaped the first inning unscathed this time, but Ryan Howard and Domonic Brown opened the second with back-to-back doubles to draw first blood. A weak Delmon Young single moved Brown to third and he'd score from there one batter later thanks to Daniel Murphy's first miscue of the inning. Slap hitting center fielder Ben Revere chopped a bounding ball toward the middle of the diamond that Murph fielded cleanly, but for some reason, he decided to take the ball to second base bag himself rather than flip it to shortstop Omar Quintanilla. He retired Young on the force, though any chance of getting a relay throw off in time to double up the speedy Revere was lost.

That proved costly, as Carlos Ruiz followed with a single. Revere took two bases on the hit and, after a sac bunt from Cole Hamels, he trotted home with Philly's third run when Murphy bobbled a routine grounder off the bat of Jimmy Rollins. Thankfully, Hefner extricated himself from jam in a fielding-independent fashion, fanning Chase Utley for out number three.

Speaking of Hamels, the Mets made him look unhittable the first time through the order. Which is to say, the offense didn't get a base knock off the left-hander until the fourth. That's when Eric Young, Jr. broke up the no-no with a deep drive that nearly cleared the wall for a homer, but the ball bounced off some decorative shrubbery planted at the top of the fence, which according to Citizen Bank Park ground rules, meant the ball was still in play. He'd settle for a double and depend on David Wright to drive him in, which the captain did with a seeing-eye single. Young was in the thick of another scoring drive an inning later. With one out and runners on second and third, the new Met snuck a worm burner just past the outstretched glove of a diving Jimmy Rollins and into center field to plate a pair game-tying runs.

Things wouldn't stay tied for long. In a good way, though. In the top of the sixth, Juan Lagares, who went three-for-four at the plate this evening and played an impressive center field, put the Mets up for good by hitting his second double in as many plate appearances. Lagares drove the Cole Hamels offering deep enough into the left-center gap to bring a lumbering Lucas Duda all the way around the bases from first with what would wind up being the game's deciding run.

Of course, such a comeback wouldn't have been possible without the solid pitching of Jeremy Hefner. The Oklahoma native settled down nicely after the rough beginning to his outing. Hefner's slider seemed to sharpen as the game went on and he used it to record a couple of swinging strikeouts that cut short Philadelphia rallies in the fourth and sixth. His final line doesn't look terribly impressive: ten hits allowed in six innings pitched, but several of those safeties likely would have been converted into outs with a better defensive unit behind him. Plus, it's hard to argue with seven Ks to just one (semi-intentional) walk. With Jon Niese on the shelf for the foreseeable future, Hefner's spot in the rotation appears to be safe for now, but he can certainly cement his case with a few more performances like the one he turned in tonight.

Neither team did much of note from the seventh inning stretch on. Scott Rice and newcomer Carlos Torres each tossed a scoreless frame of relief, while closer Bobby Parnell needed just 14 pitches to retire Chase Utley, Michael Young, and Ryan Howard in 1-2-3 fashion for his twelfth save in 15 chances. The Mets will see if Dillon Gee can keep the good vibes going in the City of Brotherly Love tomorrow afternoon starting at 4:05 p.m. He'll be opposed by Phillies rookie Jonathan Pettibone. 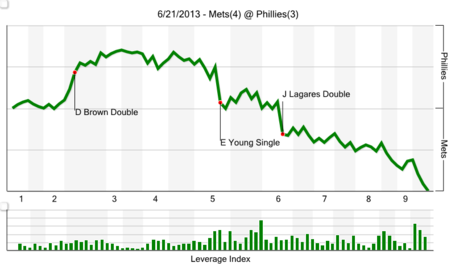