Catch up on all the news and notes from the Mets minor league system!

The 2013 season has not been too kind to D.J. Mitchell as his walks and hits allowed have increased exponentially, leaving the beleaguered Clemson alum with a season WHIP of 2.050. However, last night the trends went to the wind as he threw five masterful shutout innings while striking out eight. The 51s only slugged six hits last night, but 66% (if you're an infinite decimal place zealot, deal with my rounding down) of them were for extra bases as Rylan Sandoval had two doubles and Mike Baxter hit his second PCL home run of the season, a fifth-inning blast of the solo variety. Four relievers (Justin Hampson, Gonzalez Germen, Jack Leathersich, Robert Carson) aided Mitchell's mastery of the Bees last night with Carson recording his second save of the season.

A win of the surreal and dramatic took place last night at NYSEG Park in Binghamton as the Eastern League Mets were able to rally from a four-run ninth inning deficit to defeat the Erie SeaWolves 6-5 in ten innings last night. Four eight innings, nary an dent was made against SeaWolves starter Jon Link, with the only offense provided a Travis Taijeron solo home run in the second inning to provide a 1-0 lead. After procuring the first runs of the game, Erie proceeded to score the next five courtesy of a Wade Gayner three run home run off Mark Cohoon in the fourth, an Hernan Perez sixth inning single off Jim Fuller, and Ryan Fraser walking Gayner in the ninth with the bases loaded.

Then the fireworks started against reliever Melvin Mercedes:

Per Greg Murray, this was Hughes' first game since April 27th. Jeff Walters was able to pitch a scoreless 10th after relieving Fraser's leadoff walk, and then the B-Mets won it on a Josh Rodriguez double against Erie reliever Ryan Robowski.

(Video of the walk-off game can be seen here via FOX 40 WICZ) NOTE: How on earth do you not have either the Hughes HR or the walk-off in your recap of this game? Sheesh.

Casey Rasmus' RBI triple in the sixth give the Cardinals a lead they would not relinquish as the defeated the St. Lucie Mets last night 6-5. After cruising through the S-Mets lineup for three innings, Tyrell Jenkins finally encountered some turbulence in the fourth as a result of this:

Carlos Vasquez pitched four solid innings in a spot start, departing with 4-2 lead. However, Estarlin Morel proceeded to let that lead dissipate in his two innings of relief, and Randy Fontanez allowed an unearned run in the eighth with help from his own throwing error. The Mets were able to attempt a comeback in the ninth against Palm Beach reliever Dean Kiekhefer, as Robbie Shields' leadoff double was converted into a run via a T.J. Rivera single, but Matt den Dekker grounded into a fielder's choice to complete the requisite 27 outs a team needs to obtain to achieve victory.

Steven Matz and Christian Binford locked horns for six innings in an outstanding pitcher's duel, with each pitcher departing after the sixth inning without allowing a run. The only runs for the game were allowed in the eighth by Julian Hilario in the form of a Bubba Starling double and a Michael Antonio single scoring Starling. The Sand Gnat offense was rather impotent as only one of their hits constituted extra bases, and an accumulation of fourteen strikeouts is rather conducive to scoring as few runs as possible.

The Aberdeen Ironbirds secured their first win of the season at Keyspan Park last night, but the short-season Mets figured they would at least try to be like their AA counterparts and score four in the bottom of the ninth to tie the game. However, unlike their Bingo brethren, a win was not to be secured as Aberdeen was able to get a tenth-inning run and prevent the Cyclones from doing likewise in their half of the inning. NY-Penn league repeat Sebastian Vader threw a jewel for Aberdeen, allowing three hits over eight innings while striking out ten and walking none. However, upon Williams Louico's entry into the game, the Cyclones bats woke up and with a little luck did this:

A wild pitch, a passed ball, a fielder's choice, and an RBI single produced four-run insanity. However, the IronBirds were able to strike against another NY-Penn repeat David Wynn, and Jorge Rivera was able to get Gavin Cecchini to bunt into a double play (things happen in the lower levels), and get L.J. Mazzilli looking to end the game.

The Appalachian League is raw and laden with wonderful, toolsy talent. It is one of the only places where a team can have five errrors like the Kingsport Mets did last night and not allow an unearned run. The average age of the hitters is 20.1 and the pitchers is 21.2 and it is where dreams are, man. Alas, our Appy League heroes dropped their third straight to the Johnson City Cardinals nonetheless.

Note: In the most sincerest of mea culpas, I neglected to put the GCL Mets opener which is a foolish errand considering the prospects that are playing there. So without further ado:

Good God, there's a ton of talent here. Wuilmer Becerra of the Dickey trade, newly-signed first rounder Dominic Smith, And hello there, Vicente Lupo. Also, if you ever in Florida, go catch a GCL game as they are usually held in the spring training parks and/or FSL affiliate stadiums. Not to mention they do not charge admission.

For all of those inclined: The box scores for DSL Mets 1 and DSL Mets 2 for your purveying pleasure. 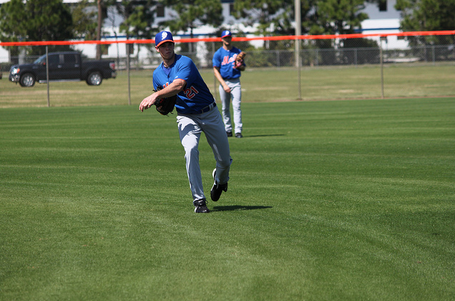