David Wright had four of nine Mets extra base hits, and Matt Harvey allowed just two hits in six shutout innings as the Amazins cruised to victory in Philadelphia.

It was just one of those days for the Mets. You know, one of the good days! Not the lousy ones we're so accustomed to talking about. Matt Harvey had six strikeouts in six innings, David Wright was just a single short of the cycle, and not even a rain delay could slow the Mets down as they romped their way to an 8-0 win over the Phillies on Sunday. 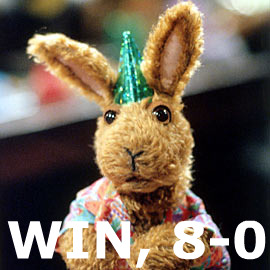 The day started out innocently enough. Eric Young continued to be a leadoff hitter extraordinaire and kicked off the first inning with a single off of Phils starter John Lannan. Murphy followed with a base hit of his own, and two batters later Marlon Byrd hit a sacrifice fly to left field that drove in the only run that the Mets would need today.

Granted a lead to work with, Harvey set the tone on the mound early. He struck out Jimmy Rollins on a beautiful curveball to start his day. Later, in the second inning, Harvey blew three fastballs right by Phillies slugger Domonic Brown, and then he reached 100 MPH on his strikeout of Ben Revere that ended the inning.

Harvey got into trouble in the fourth inning when Chase Utley hit a leadoff double, but the big righty refused to be rattled. With runners on the corners and one out, he struck out Brown with another heater. The wonderful Delmon Young was up next, and he grounded out to shortstop to help Harvey escape danger.

Although Harvey was cruising, the Mets still had but a single run on the board. That would be amended in the top of the fifth, when the Amazins broke through against Lannan. The rally started with a relatively deep fly ball hit by Juan Lagares. Ben Revere appeared to catch the ball in his glove, but then it dropped to the ground when he went to make the transfer to his bare hand. The umpires ruled that this was not a catch, and Lagares went all the way to third on the error.

When Omar Quintanilla followed with a ground ball to shortstop that didn't get the run home, it appeared that the Mets might waste another opportunity like they did in the fourth. In that frame, Wright led off with a double but was left stranded when John Buck grounded into a double play. Fortunately, the Mets would not fail to pick up the big hit this time around.

Matt Harvey was up after Quintanilla, and he drove a fly ball deep to right field that went for a double. Lagares jogged in from third and the Mets were rolling. Young ripped a double to left field to plate Harvey, and two batters later Wright hit his second double in as many innings to get Young home. The Mets now had a cozy 4-0 lead.

That wasn't enough, though! After Harvey quickly retired the Phillies in their half of the fifth, Lannan walked both Josh Satin and Buck to begin the sixth. Lagares — apparently on a mission to prove that his benching yesterday didn't quell all the momentum he had accrued over the previous two days — followed up with a double that scored Satin and chased Lannan from the game. Quintanilla capped off the inning with a sac fly off of Phillies lefty Joe Savery.

Harvey retired the side in the sixth, but the progressively increasing amount of rain grew to be too much after Daniel Murphy made the first out in the seventh. The umpires decided that the field was getting too wet and ordered the grounds crew to bring on the tarp. Although the delay would only last around 30 minutes, Terry Collins made the wise decision to lift Harvey from the game.

Savery, however, stayed in the game even with righties Wright and Byrd due up. When the tarp was lifted, Wright crushed a triple off of the right field wall and Byrd doubled him home to give the Mets a 7-0 lead.

Wright wasn't done, though. In the ninth inning with Jake Diekman — another lefty — on the mound, Wright golfed a home run into the left field seats to complete his dominance of left-handed pitching.

Meanwhile, LaTroy Hawkins and Brandon Lyon mopped things up for the Mets with a combined three innings of work. Phillies Nicaraguan rookie J.C. Ramirez struck out the side in the eighth inning in his major league debut. 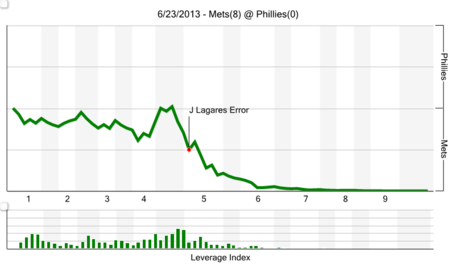