Matt Harvey's last two starts were excellent, and he remains one of the contenders for the National leagu

The Matt Harvey Tracker last checked in on the 24-year-old's outstanding season after his 14th start. Since then, he's made a pair of excellent starts: one against the Braves and one against the Phillies. Both starts came on the road, to boot.

In Atlanta, Harvey was as dominant as he's ever been through seven innings. But he was charged with three runs after loading the bases and handing the game over to the Mets' bullpen, which allowed all three inherited runners to score. It was still a very impressive start. Five days later in Philadelphia, Harvey's start great before it was shortened by a rain delay. It had taken him just 72 pitches to get through six scoreless innings; an eight-inning start was probably in the cards if not for the lousy weather.

To retire the Braves with ease in the first seven innings of the game, Harvey relied heavily upon his fastball, which is normal and particularly understandable in this start he was throwing gas. After that, he went to his slider—which traveled at a faster speed on average that Dillon Gee's fastball—and generated whiffs on over one third of those pitches. Here's what it looked like in strike zone plot form. Oh, and he topped out at 100.85 mph with his fastball. No big deal. 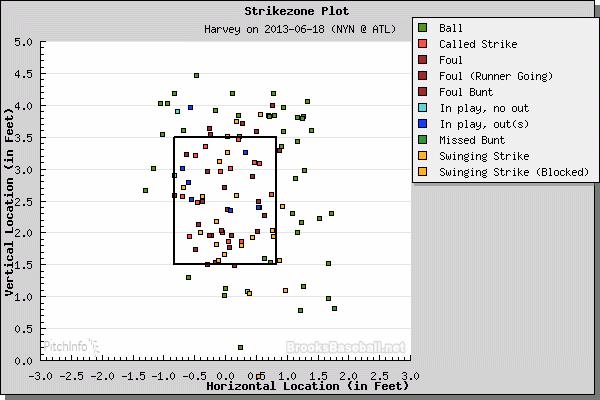 Harvey varied his location vertically much more than horizontally, which hasn't always been the case with his starts. He has a tendency to pitch away to both left- and right-handed hitters. In this start, his outside pitches to lefties hit the outside third of the strike zone, while pitches to righties were more often outside the zone entirely.

Because of the rain delay that ended his start early, there's less data to work with here, but Harvey threw his fastball almost exactly as frequently as he did in his 15th start. He used each of his off-speed pitches nearly equally, but it was his slider, fastball, and curveball that drew swings-and-misses. For the second straight start, Harvey hit 100 mph and just barely missed clocking in at 101 mph. It's possible that he has actually gotten better since the start of the season. 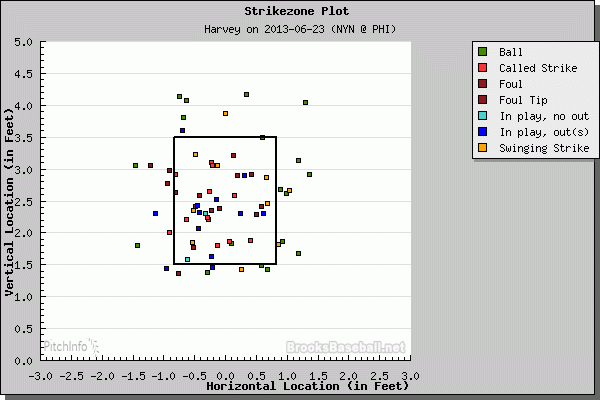 Amazin' Avenue's GIF Of The Game

With these two starts, Harvey has further established himself as one of the best pitchers in the game. If not for Jeff Locke's 2.01 ERA—which does not appear to be sustainable if he continues to pitch as he has this year—Harvey would be leading the National League in every category below except for walk rate. And his walk rate isn't bad, either, as not many pitchers strike out as many batters as Harvey has while the walks at a respectable level.

As has been the case all season, Harvey still compares well to three of the Mets' earlier Cy Young Award seasons.