The Mets two top pitching prospects will appear at Citi Field during the All-Star break; Nimmo too (maybe)!

Share All sharing options for: Syndergaard and Montero to appear in 2013 Futures Game at Citi Field

Mets fans will get a sneak preview of the club's top two pitching prospects next month at Citi Field. That's because righthanders Noah Syndergaard and Rafael Montero were both named to the 2013 Futures Game:

Syndergaard has been excellent thus far in 2013, posting a 3.11 ERA in a dozen starts for Advanced-A St. Lucie before he was promoted to Double-A Binghamton last week. In 69.2 innings total, the 20-year-old has struck out 71 batters versus just 17 walks. The 6’6" right-hander was acquired via trade -- for R.A. Dickey -- with the Toronto Blue Jays in December 2012. The Texas native will pitch for Team USA.

Additionally, with Zack Wheeler's promotion to the majors, Syndergaard is now arguably the organization's top overall prospect. Over at Baseball Prospectus, Jason Parks elevated him to the 23rd-best prospect in all of baseball on his mid-season list (Travis d'Arnaud came it at no. 28). 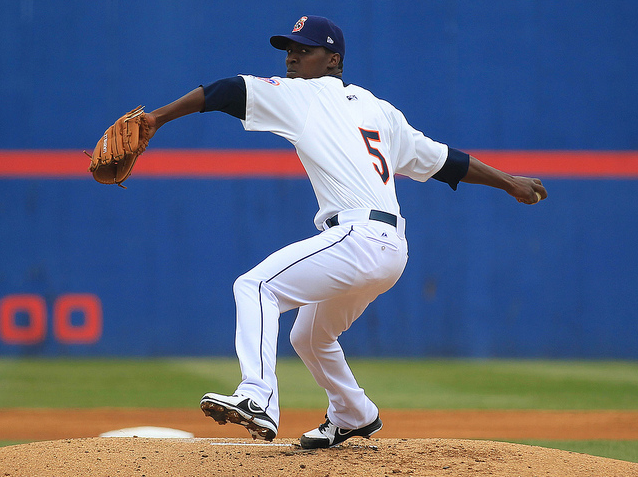 The 22-year-old Montero has been just as impressive this season, posting a 2.43 ERA in 11 starts for Double-A Binghamton before he was recently promoted to Las Vegas. For the season the diminutive righty has a 9.6 strikeout per nine mark, but more impressive is his 1.7 walk per nine figure. The Dominican native will pitch for the World Team.

For all you Mets prospect-watchers, this represents a rare opportunity to get a peek at the future a couple years early. The Futures Game will take place at 2PM on Sunday, July 14th at Citi Field.

As an added aside, the Futures Game has incorporated a fan vote for the final roster spot on each team and, wouldn't you know it, Brandon Nimmo has appeared on the ballot:

Do you want to see Brandon Nimmo in the 2013 Futures Game? He's on the final ballot. #Mets fans - vote here http://t.co/YYAdbVRVbk

He's up against players like the Yankees' Tyler Austin, Detroit's Nick Castellanos, and Boston's Garrin Cecchini -- brother of Mets first round draft pick, Gavin. So, you know, go vote for Nimmo so we can see him play too!