The Mets held a media event on Wednesday to unveil their specially-crafted All Star game menu...and I was lucky enough to be in attendance.

If you haven’t noticed, the Mets are pretty excited about hosting this year’s All Star Game. From patches on their uniforms, to commemorative bobblehead giveaways, to more than a couple of commercials on SNY, they’re pretty much putting on the full-court press. So naturally as part of their all-encompassing build-up to July’s festivities, the Mets have revamped the culinary experience at Citi Field as well.

To be precise, it’s not as much a revamp as it is a shot in the arm for an already excellent example of ballpark fare. In short, Aramark and the executive chef at the stadium, Robert Flowers, have worked to supplement the existing options with dozens more interesting offerings. Beyond just creating a number of new dishes/sandwiches/snacks, they’ve also reached out to several restaurants and caterers from all five boroughs to help create a menu in the image of New York City.

As you can probably tell, I was genuinely impressed with their efforts. First and foremost, the sheer volume of different options that they’re going to be churning out is astounding. Including the items on their regular menu, there will be somewhere around 50 different options for diners at the ballpark that day.

If big numbers don’t impress you, the quality most definitely will. Most of us know from past endeavors that from day one Citi Field has raised the bar when it comes to eating out at the ballgame. In that respect, they’ve outdone themselves almost without exception.

My strategy going into each of these culinary events has been and will always be to try everything – in order to best inform you, the reader, of course. However, with the sheer number of options, I must say that I didn’t quite hit that lofty goal (though, let's just say I had more than my fair share). Instead, I’ve included photo-documentation of nearly everything on display at yesterday’s event while relaying a handful of my favorites -- in no particular order -- from the gastrointestinal carnage that ensued. 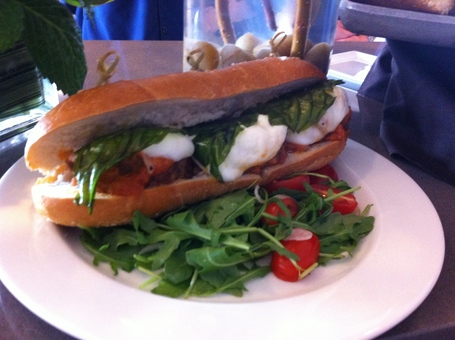 This limited edition sandwich -- yes, it's a limited edition sandwich -- was the star of the show as the recipe comes from the family of the executive chef of Citi Field -- a recipe which purportedly dates back three hundred years. The meatballs themselves are a blend of ground beef, pork, and veal, simmered in red sauce for three hours. They’re served with buffalo mozzarella and fresh basil on a crisp sesame roll. Nothing too tricky here, just a damn, damn good meatball sandwich. Although I must say, I’ve never been one to call tomato sauce ‘gravy’ – I suppose I’m just not Italian enough. This offering will be available at the Section 138 concessions outlet. 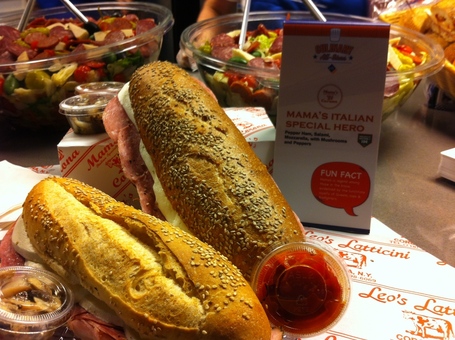 An oldie, but a goodie. Mama’s of Corona is a classic option, long before Mets fans knew the words Blue Smoke. Mama’s was one of the few specialty purveyors back in the non-descript days of Shea, and they’re still going strong. The Italian Special Hero features pepper ham, salami, sliced fresh mozzarella, topped with mushrooms and peppers on a fresh sesame, roll. The amount of options may be growing but this sandwich always seems to find itself at the top of my list. This offering will be available at the Section 104 concessions outlet. 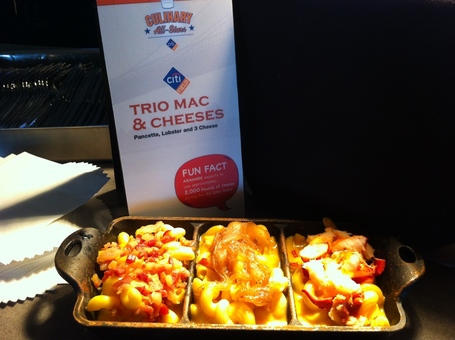 The trio was made up of a Pancetta-Mac, Lobster-Mac, and a Three-Cheese option. My only qualm was that the extreme creaminess factor, especially with the three-cheese, might not necessarily lend itself to a hot, summer day in the ballpark. That being said, this is more of a formal, sit-down option anyway – as opposed to eating it in the comfort of your seat – and in that regard it’s spectacular. This offering will be available in the Citi Field suites.

Catch of the Day Lobster Roll 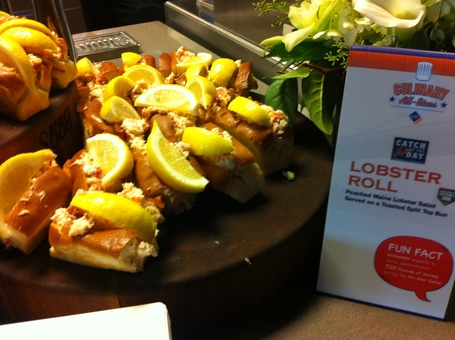 The Catch of the Day Lobster Roll is notorious for its lofty price – usually around $14 for a single roll. However, if you can stomach the price tag, the Lobster Roll itself is a thing of beauty. Fresh, poached Maine lobster salad on a split served on a toasted, split-top bun, this is pretty much the epitome of a classic, delicious New England lobster roll. This offering will be available at the Section 102 concessions outlet. 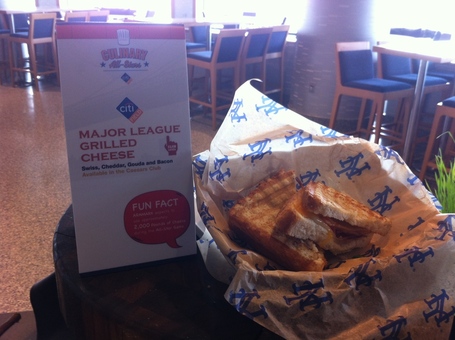 With the culinary options at Citi Field getting more and more extravagant, I found myself more impressed by some of the simpler options – and this grilled cheese sandwich was a great example of a modest idea executed to perfection. It featured a trio of Swiss, Gouda, and Cheddar cheese, topped with a layer of crispy bacon on buttered white toast. The cheese-to-bread ratio was spot on, the bacon had just the right amount of crunch, and despite the lack of some of the bells and whistles of other offerings, one of the best sandwiches I ate all day. This offering will be available in the Caesars Club.

For the rest of the myriad options available to fans at this year's All Star festivities, browse through the gallery below!

Additionally, here are some fun facts regarding Aramark -- Citi Field's sole culinary vendor -- and the All Star Game: