The Vegas bats were shut down on Thursday as they mustered just three hits and one walk while striking out 11 times on their way to losing 2-0. Chris Schwinden and his mustache were surprisingly good in this one. He went 7 IP, 7 H, 2 ER, 1 BB, 6 K to earn the hard-luck loss.

That's two three games in a row canceled/suspended by rain.

You want the good news or the bad news? I always like to get the bad news out of the way, so here it is; Kevin Plawecki had to leave this one early with an apparent hip injury. Bummer. No word beyond that at this time. The good news is that Jayce Boyd went 2-5 with a double and a home run. This brings his high A line up to .429/.429/.686. If you go back further to when he was raking in Savannah just prior to the promotion, this kid is on a serious hot streak. We talk about his lack of power because that was the knock on him coming out of college but he slugged .494 in A ball while playing in Historic Grayson Stadium which is famous for its power suppression, amongst other things. I'm bullish on Boyd is what I'm saying.

The story in this one--other than the offensive outburst from Gnats--was Logan Taylor, who called for the trainer and then left the game in the second inning. Taylor is having a fantastic season--his K/9 and BB/9 came into the night at 10.36 and 2.51 respectively--so here's hoping that it's nothing serious. Speaking of hoping something isn't serious, how about Brandon Nimmo and the strikeouts? He now has nine in his last four games and has struck out multiple times in each of those games, as well as six of his last ten. In fact, you'd have to go back to June 11th to find a game where he didn't strikeout. He's appeared in 49 games this year and recorded at least one strikeout in 38 of them and multiple strikeouts in 19 of them. I know he's raw. Still, though.

The Cyclones jumped out to a 5-1 lead but were undone by a five run 5th inning that saw them relinquish the lead for good. On the bright side, Gavin Cecchini was 2-5 with a double. Also on the bright side was another brief but whiff-filled outing from Akeel Morris.

The K-Mets lived up to their namesake, striking out 14 times en route to an 8-0 loss Thursday night. Corey Oswalt made his season debut, piggyback starting with Yoan Gonzalez. He struck out three, walked one, and allowed one hit over four innings. Not much to speak of offensively, it was a truly putrid performance. 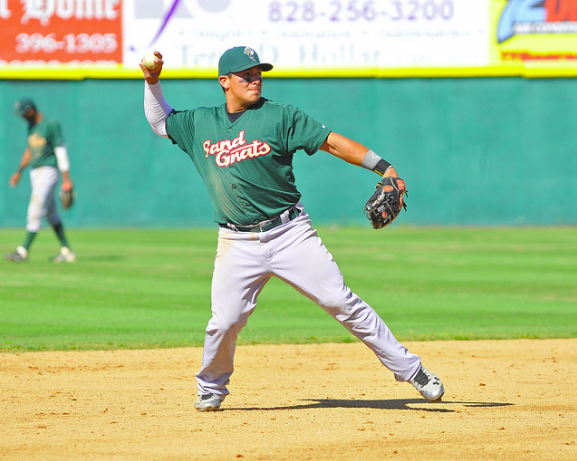 The 20-year-old Evans was ranked the no. 19 prospect on the Amazin' Avenue preseason top 50. (Photo Credit: Tracy Proffitt)

I just have to give the SotN to Phillip Evans. I put the horns on him so many times earlier in the year--at times unjustified--that I have to reward him and his hot streak. Evans went 2-for-4 with two doubles and three RBI last night to bring his line over his last ten games to .353/.450/.529.

Strong consideration for Mother Nature, who again robbed of getting our Cesar Puello fix. However, when you post a golden sombrero, you get horns to go with it. Here's looking at you, Eudy Pina.