The 27-year-old righty has exhibited one markedly different trend over his last few starts. But what's causing it?

Share All sharing options for: What is Jeremy Hefner doing right lately?

After a particularly ugly no-win, five-loss stretch to start the season, Jeremy Hefner has had a change of fortunes lately. Some of that luck has to do with run support; his 3.1 runs scored per inning pitched mark ranks as one of the 25 worst in all of baseball (average is 4.4). Yet the Mets have scored 14 runs over his last two starts.

The more important change, however, has been Hefner’s improving performance against lefties. This improvement was on display Wednesday night at Yankee Stadium where, despite a lone blemish against Brennan Boesch, he posted his third Quality Start in his last four outings. More to the point, over that stretch of starts Hefner has done a much better job keeping lefthanders in the park.

It's no secret that Hefner struggles mightily against opposite-handed batters. Thus far in 2013 lefties are batting a robust .337 against him; righties an anemic .180. And of the ten home runs Hefner has allowed this year, eight have come against lefties.

Yet, it's important to note that six of those came over his first seven appearances (six starts), driving his disastrous 2.06 homer per nine rate over that span. Over his most recent four starts that figure is down to .88; nothing to write home about but certainly a marked improvement. So what's driving this improvement?

It's easy to say it's sheer luck. Extreme home run rates are considered to be unsustainable -- a product of good or bad luck. However, it would be at least a little surprising for his luck to turn so dramatically during a stretch of games against potent lefty-heavy lineups (see, Cardinals, Braves) in tough righthander pitching environments (see, Wrigley, Yankee Stadium). Could anything else be at play here?

Well, at the very least it's somewhat instructive to take into account Hefner himself as he attempts to explain the difference. From a recent piece in the Star Ledger:

"Earlier in my career, and definitely in the minor leagues, I had always been pitching away from guys," Hefner said. "We’ve really worked hard, especially over the last three or four starts, to pound inside. And if I’m going to miss inside, I’m going to miss towards the batter and not over the plate."

The emphasis added was mine.

Let's take a look at some Pitch F/X data to determine whether what Hefner is saying makes sense. Knowing his area of weakness, we'll look at what he did exclusively against lefties.

Below is Hefner's scatter plot of of two-seam fastballs during his first seven starts of the season (click images to embiggen):

Clearly he liked to live away and when he missed, it happened on the outside of the zone. And now, here's what he did in the last four:

While he still likes to live away a little bit more, there's a lot less concentration on the outer half of the plate and he's clearly making a point of crowding lefties a lot more.

Next, here's the bird's eye view of the trajectory on Hefner's four-seam fastball. Note where it crosses the plate:

Now here's where he's been throwing in over the last four starts:

Again, it may look like a minor difference; however, those few inches represent the difference between a lefty extending his arms as he swings and, instead, getting jammed.

Finally, consider the results against Hefner before and after he changed his plan of attack (also via TexasLeaguers.com): 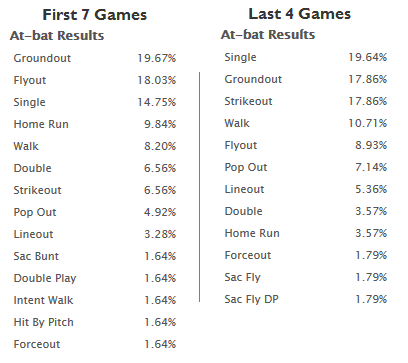 While Hefner has still been far more susceptible to lefties, we can see that they're having a much harder time driving the ball against him. And whether or not we're seeing a fit of regression after a poor outset or an effective change in strategy -- or both -- something is certainly going right for the 27-year-old righty. And with Zack Wheeler lurking in Triple-A, the timing couldn't be better.