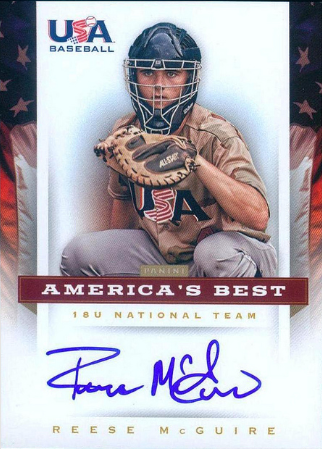 I won't bury the lede here. McGuire is my guy, at least out of those players with half a shot to still be on the board at #11. McGuire profiles as a potential plus defensive catcher at the major league level and gets high marks for his makeup and baseball IQ. Prep catchers tend to be risky picks, especially when, as in McGuire's case, there are legitimate questions about their bats. But for me, McGuire has a higher floor than the usual prep catcher due to his athleticism, baseball instincts, and present-day defensive skills.

McGuire is still risky compared to the college bats ranked near him due to his lack of current offensive tools, but he also won't have to hit nearly as much as them to be a valuable major league player. Unfortunately, of the players we're profiling this week, McGuire is probably one of the longer shots to be available when the Mets pick. Most mock drafts have him going off the board to either the Pirates at #9, or the Blue Jays at #10. If he does fall to #11, the 2.8 million dollar slot should be enough to sign him away from his commitment to San Diego.

"Reese McGuire has the highest ceiling of any prep catcher in this draft. You notice his athleticism immediately, and he’s very agile behind the plate, with outstanding footwork, a strong arm, and good receiving skills. He even calls his own games, almost unheard of for a prep product. The question is his hitting. He has natural strength and a quick bat, but his swing is too geared toward power production. He sets up very high, has a dramatic leg kick, and severely overstrides. The glove is nearly ready, but that bat will need some work."

"McGuire showed his athletic versatility with Team USA, playing third base and outfield, but he's best as a catcher in pro ball. He is a natural behind the plate. He remains loose, even after adding strength to his 6-foot-1, 190-pound build. His receiving, blocking and arm strength are all above-average, and he has been calling his own games since he was 10 years old. He has a high baseball IQ and game awareness. The question will be how much McGuire will hit. He has a smooth lefthanded swing with strength and bat speed and shows the tools to be an above-average pure hitter with average power. The San Diego recruit runs better than most catchers. Even if he doesn't reach his offensive ceiling, McGuire's defense will allow him to be a big league backup, but if he hits he has all-star potential."

The longer I follow prospects, I find myself valuing two things much more than I used to: One, present-day hit tool utility. Or, for the layman, can the guy actually hit a baseball? Two, catchers that profile as plus defenders. McGuire may end up as just an average hitter, something like .260 with 10-15 home runs, but if you combine that with a potential plus defensive profile behind the plate, that's a dude, especially as offensive levels drop and the game tilts back towards pitching. He doesn't have the elite defensive tools of say, Austin Hedges, the top catching prospect in the Padres system, but there is enough defense there now to make him a very valuable commodity even if the bat doesn't ever wow you.

Also, if McGuire is still on the board when the Mets pick at #11, he will likely be the best player available at that spot. Obviously the Mets have more catching depth in the system than they have had in years between Travis d'Arnaud and Kevin Plawecki, so McGuire doesn't fill an organizational need in the way one of the prep or college outfielders might. But I think McGuire has a higher ceiling than all the college outfielders, and the prep outfielders are even less likely to be there at #11. And in a system about to take a large hit with the expected graduations of d'Arnaud and Zack Wheeler, the Mets should prioritize BPA even if it means taking a player who's ETA might be four years out at best.