Aaron Judge is a big bat coming out of Fresno State. Seriously, the guy is 6'7". 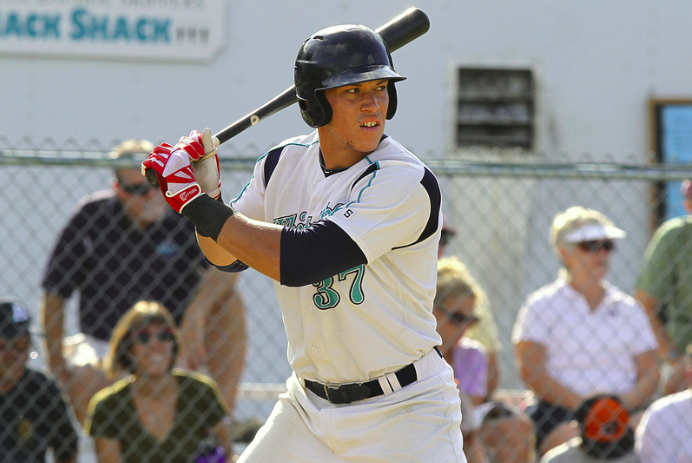 First and foremost, Judge is a mountain. The guy measures six feet, seven inches -- which would make him one of the largest outfielders in MLB history if he makes it. He's a legit outfielder though, thanks to an athletic build and good speed. He's currently playing center field for the Bulldogs, but he would profile nicely as a power-hitting right fielder.

And the power is indeed the calling card. Judge features -- big surprise -- very easy power and allows scouts to dream on a 30+ homer hitter in the pro ranks. After disappointing in that department over his first couple seasons, the power bat blossomed in 2013 as he batted .345/.451/.529 with 18 home runs for Fresno State. That being said, his size does make for compromised swing mechanics -- creating some swing-and-miss in his game. I also feel it should be pointed out that only one outfielder 6'7" or taller has ever posted a season of three WAR or better (Hondo, baby).

"When scouts reach for 'Blake Griffin' when they need a physical comparable, you know you're a big baseball player. Judge has raw power but a somewhat short swing that generates more contact than big flies in games."

"He has 30-homer potential for a team willing to overlook what might be 150 strikeouts a year, which would still be an above-average player, but the fact that he hasn't shown a ton of power during games so far is a minor red flag."

"Judge has patience at the plate, runs pretty well and has a strong arm, all the tools for a future right fielder. How he performed during his junior season with the bat was going to determine where he lands on Draft boards. That performance was a bit up-and-down but a team that saw him on a good day -- and put stock in his strong Cape performance -- might be willing to gamble he'll hit enough to tap into that power at the next level."

"Judge is a huge, strong kid who you’d expect to have no trouble hitting for power. He’s an absolute physical specimen, a 6-7 giant who can also run, profiling down the line as a power-hitting rightfielder. Unfortunately, before 2013 Judge just didn’t hit for any power at all. He has improved substantially this season, but many scouts remain skeptical that Judge will hit for power as a pro. He’d be aided by increasing his load or possibly starting his hands higher, but the real key will be getting him to utilize his lower body more. Often he just doesn’t transfer his weight and is sometimes prone to turning his hips too early. And contact might not be easy for him either; tall hitters often struggle with inside heat."