After a flat-out dominant summer in the Cape Cod League, the lefty has fallen hard this spring. So does he represent a draft day bargain or a kid who peaked too soon? 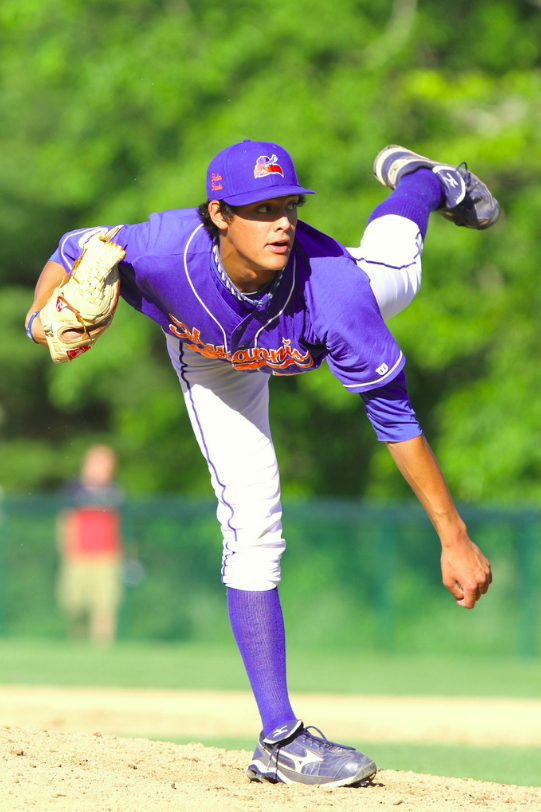 Sean Manaea has progressively gotten better since he debuted with Indiana State, but he really came to the attention of scouts during the summer of 2012, for his work in the Cape Cod league. He'd win the Pitcher of the Year Award, with a 5-1 record, 1.22 ERA in 51.2 innings, and a 85:7 K:BB ratio.

When he is on, Sean Manaea has an excellent fastball, one of the best in the draft. It generally sits in the low 90s and can be thrown as high as 95, 96 MPH -- though he has shown problems keeping the velocity up late in games. From the low ¾ arm slot, the fastball has good running action, and is very fluid. In addition to the fastball, he throws a slider and a change-up. The slider is still a work in progress, but shows flashes of being a good pitch when Manaea has control of it, and it is breaking properly. The change-up is also developing but is a better overall pitch than the slider. It is thrown in the low 80s, so depending on how much velocity he has on his fastball, the speed differential is anywhere from 10 to 15 MPH.

Manaea has good mechanics from the left side, but his delivery and follow-through have a lot of moving parts. An occasional hitch here or a yip there can have a chain reaction around the rest of his body that has a negative impact on his overall command and velocity. In an odd way, it reminds me a bit of Oliver Perez. To counter that proverbial kiss of death comparison, he has a great pitching face.

"He's not as polished as, say, Mark Appel or even Ryne Stanek, but a southpaw who was up to 96 mph on the Cape is going to get a lot of attention. He complements the plus fastball with a hard slurve that's very effective. He doesn't have as good a feel for pitching as the top two college arms on this list, but a 6-foot-5 lefty with that kind of arm strength had many flocking to the Midwest in 2013. "

"The picture I’ve painted here is of a big, athletic left-hander with plus stuff than could be a #1 overall pick and #1 starter if things go well. Pitching against poor competition at a small northern school and growing into his frame at a late stage make him not quite as polished and with a shorter track record than previous top picks, but scouts raved about Manaea’s Cape League domination, so this isn’t a huge concern.

His left-handedness, athleticism and slightly higher upside make up the gap between him and Stanford’s Appel. Manaea isn’t a historic talent--David Price was a superior prospect and I slightly prefer Kevin Gausman to Manaea--but the potential is here for a special pitcher."

"Manaea at one time was a candidate for the top overall pick, but inconsistency in his velocity readings this spring has pushed him down, possibly even out of the first round. Last summer on the Cape, he was throwing in the mid-90s with a knockout slider. Now he’s throwing 88-92 with a mediocre breaking pitch. What’s happening? Mechanically, he’s pretty much a mess. There are a lot of moving parts to his delivery--which also akes the ball difficult for hitters to pick up--he pronates late, he has timing issues, he throws across his body, he often struggles to find his armslot, and he needs to clean up his glove side. There’s plenty to fix and a high ceiling, but, frankly, I wouldn’t touch him with a 30-foot pole at number 11."