Coming off a four-game losing streak, the Mets had no problem beating Dan Haren and the Nationals on Wednesday night.

In the midst of one of those stretches that made it feel like they would never win another baseball game, the Mets scored early and often and defeated the division-rival Nationals easily on Wednesday night. Dillon Gee followed up his excellent start against the Yankees with a very good one in the nation's capital, and Mets hitters—like many other hitters this year—shelled Dan Haren and sent him packing after just four innings. 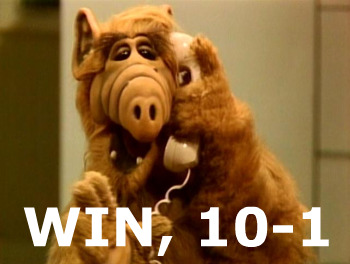 The first inning wasn't ideal. The Mets went down in order in the top half, and the Nationals scored a run on an Ian Desmond two-out single in the bottom. But that was Gee's worst inning of the night, and the Mets didn't take long to answer.

Lucas Duda doubled down the right field line to begin the second, and Marlon Byrd hit a two-run home runt to turn the Mets' one-run deficit into a one-run lead. And with one out in the third inning, Daniel Murphy hit a single before David Wright hit a two-run home run of his own to extend the Mets' lead to three. Two batters later, Byrd went deep again—his eighth home run of the season—to put the Mets ahead by four.

Neither team scored in the fourth, but Haren's night was over when he was pinch hit for in the bottom of the inning. With Craig Stammen on the mound for Washington, the Mets tacked on two insurance runs when Anthony Recker hit a single with the bases loaded in the fifth.

The Mets scored three more runs in the seventh inning to really put the game out of reach. The first scored on a double by Recker, the second on a single by Gee, and the third on Daniel Murphy double.

Gee pitched the bottom of the seventh without issue and finished the night with seven strikeouts and one walk as he had given up just one run. He's now the owner of a 5.20 ERA, which might not sound like much but is a significant improvement from just over a week ago. His strikeout and walk rates on the season are almost as good as they were last year, and his average fastball was clocked at over 90 mph, too, a very good sign after he began the season with reduced velocity.

Greg Burke threw a scoreless eighth inning, and Robert Carson threw a scoreless ninth to wrap up the Mets' easy win. As bad as the Mets have been this year, they are now just 4.5 games behind the Nationals for second place in the National League East. That probably won't mean much in the long run, but I'll take it for now.

The rubber game of the series is scheduled for 7:05 pm on Thursday night. Shaun Marcum and Gio Gonzalez are listed as the probable pitchers. 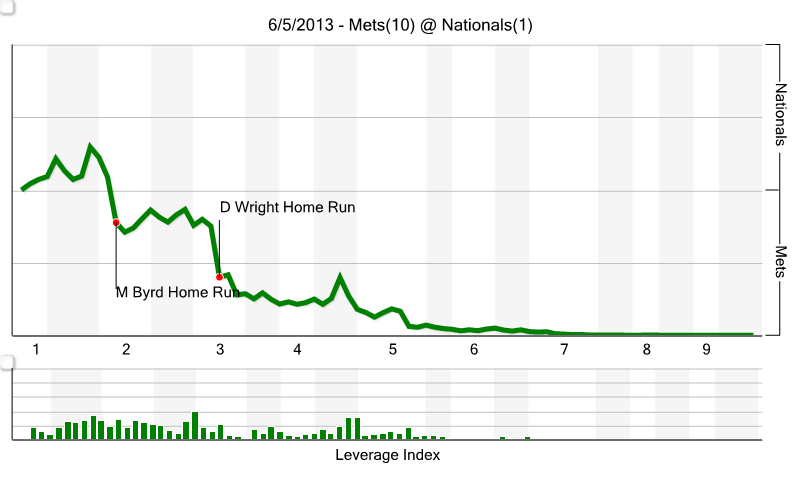