A pair of runs in the 2nd inning and another pair in the 5th were all that the 51s needed to beat the Tacoma Raniers, thanks to some solid work by journeyman Matt Fox. Fox blanked the Raniers for six innings, scattering three hits and a walk while striking out six. In the 2nd, Jamie Hoffmann doubled in a run, and a Francisco Pena double play groundout plated another. In the 5th, Eric Campbell doubled with men on first and second to knock in another two runs. Jack Leathersich replaced Fox in the top of the 7th, struck a batter, and walked a batter. The unintentional pass would eventually score, as Armando Rodriguez came in to finish the inning, but was unable to even record a single out, allowing a single of his own, and another walk. Rob Carson, of all people, was brought in to put the fire out. He allowed an RBI single, but was otherwise able to contain the offensive threat. He and Greg Burke combined to pitch the final two innings with no further problems.

On paper, we had ourselves a marquee pitching match-up: Noah Syndergaard for Binghamton and Michael Pineda for Trenton. In reality, only one pitcher showed up for prime time, and luckily for us, it was Syndergaard. The right-hander dominated a Thunder line-up that isn't exactly bad. Things didn't start out well, as he allowed a lead-off home run to Thunder left fielder Ramon Flores to start the game, but five innings later, three hits later, and nine strikeouts later, I think it's safe to say that he recovered from that. Aside from the home run, Syndergaard was on cruise control. The offense picked him up immediatley, as Cesar Puello clubbed his fifteenth home run of the season to put Binghamton up 2-1, and give them a lead they would not relinquish. They added insurance runs in the 2nd, 3rd, and 6th, and it's a good thing too, as the Trenton Thunder came rumbling back. In the top of the 6th, Jim Fuller, who came in to relieve Syndergaard, allowed three earned runs on a Francisco Arcia home run. Those runs weren't enough, however, and Binghamton held on to win their 50th game of the season.

The Fort Myers Miracle won another game, but this one was a cheap win- rain shortened the game, and as a result, the contest went six innings instead of nine. The terrific trio of Dustin Lawley, Kevin Plawecki, and Jayce Boyd all went 0-fer with a strikeout each, so who knows what could have happened if they had one more crack at it. Rainy Lara pitched for St. Lucie, and while he didn't get it, he pitched well enough for a quality start. He scattered six hits and allowed two earned runs plus an unearned run, which isn't horrible, but when the game only is six innings long and the offense can't get out of it's own way, it leaves little margin for error. St. Lucie's lone run came in the top of the 3rd, when T.J. Rivera and Matt den Dekker hit back-to-back doubles. With the loss, St. Lucie has dropped four in a row, and their second-half tailspin continues.

Luis Cessa had a strong showing for himself yet again, pitching into the 7th inning for his sixth straight start. His peripherals weren't exactly eye popping, as he scattered seven hits, walked a batter, only struck out three, and had a pedestrian 6:5 groundball:flyball ratio, but he got the job done and you can't argue with results like that. The Rome Braves' lone run off of him came in the 7th, when catcher Chase Anselment socked a solo home run. Cessa allowed another hit right after the homer, and was pulled from the game poised to lose. The Gnats pulled his fat from the fire in the bottom of the 8th, as Brandon Nimmo, perhaps coming out of the funk he's been in of late, hit a single, stole a base, and subsequently scored. With the contest tied, the game went into extra innings. The free baseball didn't last particularly long, though, as Savannah scored a run in the bottom of the 10th to win the game. With two outs and bases loaded, Cole Frenzel, wearing a golden sombrero, hit a groundball that got past shortstop Jose Peraza. With the win, the Sand Gnats return to .500.

Robert Gsellman pitched eight scoreless innings, but the Cyclones still lost. Indeed, his outing was spoiled by Brooklyn's offense, which was just as stymied by the Renegades' pitchers as the Renegades' offense was of Gsellman. In nine innings, neither team scored a run- the Cyclones managed only five hits, four of them singles, while the Renegades managed four, most of them doubles. John Mincone took the hill in the 10th and 11th innings, and was charged with the loss despite not pitching all that poorly. He allowed a leadoff double to start the inning, a sacrifice bunt that moved the runner to third, and a groundball that scored the runner, and just like that, the game was over.

The Kingsport offense was sluggish against the Elizabethton Twins, and combined with a Chris Flexen dud of an outing, a loss was all but guaranteed. Flexen was victimized by the long ball: he allowed three home runs in total, one in the 1st and two more, back-to-back, in the 2nd. Elizabethton scored two more runs off of him for good measure in the 4th inning, and though Kingsport scored a run on a Jonathan Leroux sac fly, things looked bleak. Though relievers Andres E. Perez and Alberto Baldonado kept them in the game, pitching five scoreless innings, the offense managed only three hits and a walk, and were unable to string any of them together and turn those baserunners into runs. 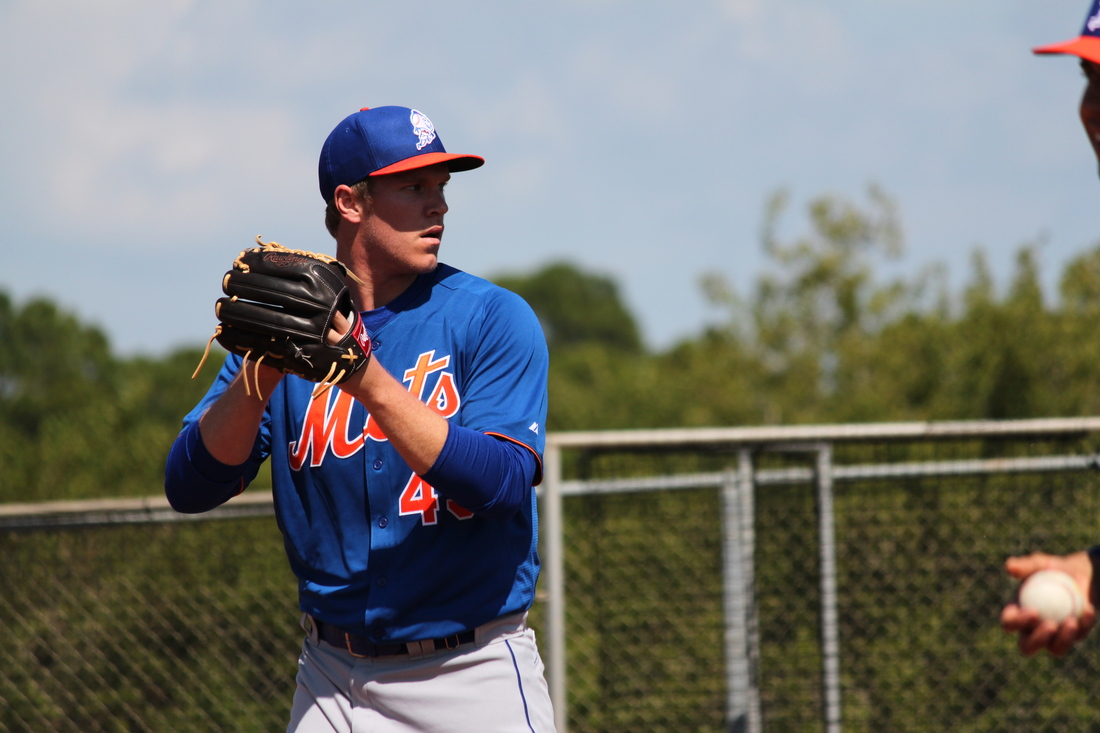 Syndergaard has a 16 strikeouts in just two games with the Binghamton Mets (PHOTO CREDIT: Chris McShane).

Pitchers Noah Syndergaard and Robert Gsellman get to split last night's Star of the Night Award. Syndergaard, we all know how special he is, and his performance last night highlights his elite potential, striking out 3/5ths of the batters he faced.

Chris Flexen had an outing that we'd all like to forget, especially him. In two starts, the 18-year-old now has already matched and surpassed his home run allowed total from six starts with Kingsport last year.