Another extra inning slog loomed in San Francisco until Marlon Byrd went deep with the bases loaded in the eighth, assuring a Mets win and a decent amount of sleep for fans.

The Mets have played an awful lot of games this season that refused to end, where leads were grabbed, handed back, and teased for 5 hours or so until somebody made an error or gave up a home run and the flickering light was finally snuffed out. The errors or home-run-up-giving were the exclusive province of the Mets until Monday/Tuesday's game, when their bad luck was finally subsumed by that of the Giants. (It's hard to say any team that's won two of the last three World Series has bad luck, and yet, here we are.)

On Tuesday/Wednesday, the Mets would not take their chances in bonus cantos. This game proved to be merely wearying (especially if you stayed up for all 16 last night), as opposed to excruciating 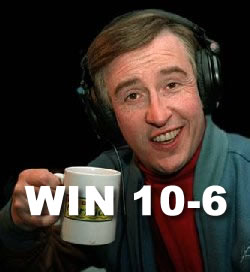 Barry Zito lazed through the first few frames in typical Barry Zito fashion, soft tossing the Mets into submission. In the top of the first, he allowed an infield single to Eric Young Jr. to start things off but nothing else. In the second, he struck out the first two batters, than allowed Andrew Brown to hit a long fly ball to left that the recently promoted Kensuke Tanaka snared with a leaping catch at the fence, possibly robbing Brown of a home run. In the third, Omar Quintanilla notched a one-out double, but the subsequent batters could not bring him home.

Dillon Gee's outings have ranged from surprising to impressive of late, but he had a much tougher go of it tonight than his lefty counterpart, as he appeared to be battling himself all night. (Granted, nearly everyone looks like they're laboring when compared to Barry Zito.) He dispatched the first two batters he faced easily, then saw Marco Scutaro reach on a "single" that skipped off of David Wright's glove and bounced over Omar Quintanilla's head. The next pitch Gee threw was belted into the left field corner, but Andrew Brown and Quintanilla combined on a great throw to the plate that nailed Scutaro with feet to spare.

Gee received no such help on defense in the bottom of the second, which began with an infield single by Hunter Pence (who, in true Pence-ian fashion, nearly tripped on the first base bag and snapped an ankle trying to leg it out). Brandon Belt then singled to right to put runners on the corners with nobody out. Gee fanned Brandon Crawford, but as Belt attempted to steal second, Anthony Recker's throw nearly hit Gee before sailing into centerfield, which allowed Pence to trot home with the game's first run and Belt to go to third.

The next batter, Guillermo Quiroz, hit a grounder toward second that Daniel Murphy ran in on and threw home, even though he had zero chance to throw out Crawford as the runner dashed for home. A run would have scored on the play anyway, and Murphy's brain cramp ultimately did not great harm since Gee stopped the bleeding there. It did force Gee to work a bit harder than he needed to, however, and served as an unfortunate reminder that when Murphy is struggling offensively (as he is at the moment), he brings nothing else to the table. The third proceeded more smoothly for Gee, a two-out walk to Sandoval his only blemish.

Zito's stuff, such as it is, began to desert him in the top of the fourth when a walk to Wright, a single by Marlon Byrd, and another walk to Josh Satin loaded the bases with one out. Brown then snuck a single between third and short that chased Wright and Byrd home to tie the game. One out later, Quintanilla dropped a single into center to bring score Satin and give the Mets the lead.

Zito recovered to throw a scoreless top of the fifth, thanks in part to second base umpire CB Bucknor, who called Young out as he tried to steal second even though it looked like he was kind of totally 100 percent safe. Wright went on to hit a two-out single that probably would have scored Young had he been on second base, but c'mon guys, since when is the point of umpiring to get things right?

The Mets could have used that run when Gee ran into trouble immediately after Bucknor's boo-boo. He threw a scoreless bottom of the fourth, but in the fifth, Grego Blanco singled past a diving Murphy to lead things off, and Tanaka followed that up by dunking a single into center (his first ML hit). Then Scutaro laid down a sac bunt because number three hitters are supposed to sac bunt I guess? In any case, that allowed Sandoval to drive in the tying run with a groundout to second.

Denied by Bucknor, the Mets opted to redeem the missing run in a different fashion in the top of the sixth. Satin worked a leadoff walk, then Recker belted a one-out two-run homer into the left field seats, putting the Mets up 5-3.

Given the lead for a second time, Gee immediately made things hard on himself by walking Belt and Crawford to start the bottom of the sixth. After another sac bunt, pinch hitter Tony Abreu zipped a single past a diving Gee to bring in a run. With runners on the corners and one out, the Giants looked poised to tie the game again, at the very least. Then they ran into some hard luck when the next batter, Blanco, hit a line drive right at Gee. The pitcher speared it and tossed it to first to double up Abreu.

Lefty Jose Mijares took the hill for the Giants in the top of the seventh and allowed a one-out single to Murphy, followed by a double to Wright. However, after Byrd was intentionally walked to load the bases, the Mets bypassed this golden scoring opportunity, as Satin was struck out looking and Brown swinging to leave 'em loaded.

Gee was asked to make his way through the bottom of the seventh, which was understandable considering how taxed the bullpen was after Monday/Tuesday's marathon, but less so considering how much he'd struggled to that point. Sure enough, Gee walked leadoff man Tanaka and saw a hit and run with Scutaro put runners on first and third with nobody out. Sandoval followed with a fly ball more than deep enough to score Tanaka from third. A two-out walk to Belt finally brought his night to an end and brought Scott "Everyday" Rice into the game. The lefty retired Crawford to keep the game tied at 5.

Quintanilla hit a one-out single against Mijares in the top of the eighth, which drove Bruce Bochy to seek relief in another lefty, Jeremy Affeldt. That move backfired on San Francisco as pinch hitter Juan Lagares went the other way and singled to right, then a wild pitch moved the runners up to second and third. After Young was all but intentionally walked to load the bases, Murphy flew out to left-center to bring in Quintanilla with the go-ahead run.

Affeldt was curiously left in to face Wright, but issued him another basically intentional walk before giving way to rookie righty Jake Dunning. Byrd took the first pitch Dunning threw and tucked it over the left field fence for a grand slam. That gave the Mets a healthy five-run lead and mercifully extinguished any real possibility of another 16-inning torture chamber.

Of course, there was still a tease to come. Carlos Torres pitched the last two frames for the Mets. In the bottom of the ninth, a throwing error and a single led to an unearned run, and then a weird "single" off of Bucknor raised the specter of Buster Posey (double switched into the game in the eighth) might actually bat as the tying run. Torres managed to induce a line out from Quiroz to end the game. Hope you enjoy your hearty four hours of sleep, Mets fans. 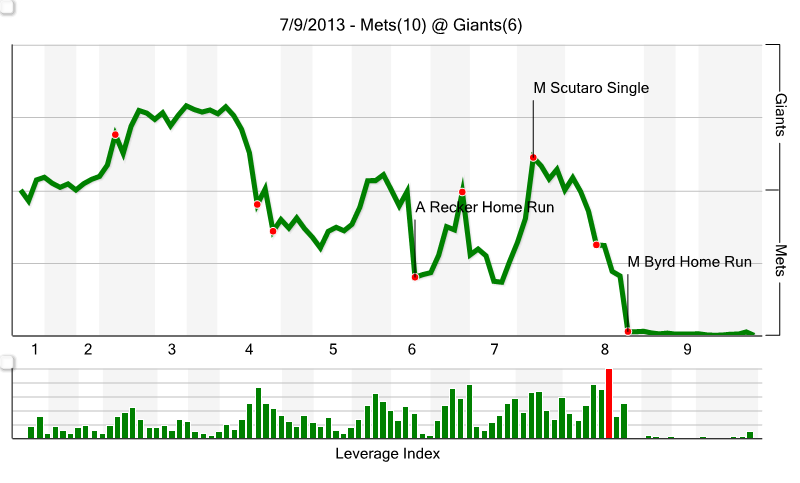