Harvey allowed three runs in seven innings in San Francisco on Monday night, but he still struck out six and walked just one.

When a seven-inning, three-run start is a bit of a disappointment, things are going very, very well for Matt Harvey. His start against the Giants wasn't quite as dominant as many of his others, but it was by no means a bad one. Harvey labored in the first couple of innings, and it didn't seem necessary to send him out for the seventh with a pitch count already over 100.

Harvey gave up a two-run home run to Buster Posey and didn't allow another run until he gave up one in the seventh. He struck out six and walked one in the game and threw 121 pitches, 85 of which were strikes.

It's not often that Harvey uses his changeup more often than his slider, but that's what he did on Monday night. The pitch was clearly working, though, as it generated four swinging strikes on just fifteen pitches. His fastball and curve were good, too, but he had a hard time hitting the strike zone with his slider and didn't get a single swinging strike with it. Perhaps the slider was the pitch most affected by his blister.

Here's how the pitches looked on a strike zone plot: 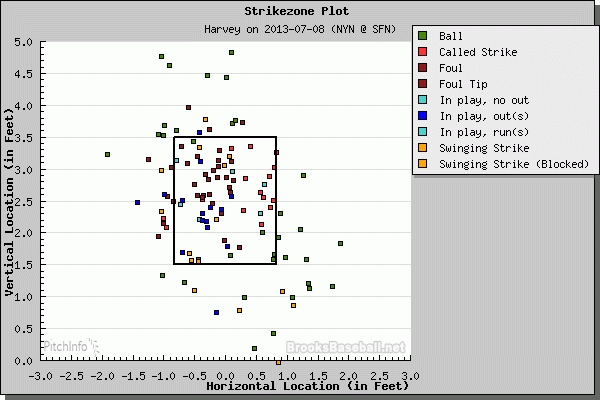 With another slight increase in his ERA, Harvey now trails three pitchers in the category: Clayton Kershaw, Jeff Locke, and Adam Wainwright. Only Wainwright has a better FIP than Harvey. But Harvey still ranks very well in two major components: strikeout and walk rate.

If there's one thing that's nearly impossible for Harvey to do, it's keeping pace with Dwight Gooden's outstanding 1985 season. But he hasn't fallen completely off, either, which is still impressive. And despite having thrown 16.2 fewer innings, Harvey still has more strikeouts than Gooden did that year through nineteen starts.