Share All sharing options for: Mets vs. Giants Recap: Zack Wheeler shuts down his old mates, Marlon Byrd hits another homer, as Mets cruise to sweep in San Francisco

Zack Wheeler never made a start for the San Francisco Giants, as he was only in A-ball when they traded him to the Mets for Carlos Beltran in July 2011. But as a former Giants' first round pick, Wheeler had to be pumped to get his chance to show his old organization just what they were missing. On Wednesday afternoon, Wheeler finally got that chance and he sparkled, as the Mets defeated the Giants 7-2 to complete a sweep of their series in San Francisco. For Wheeler, it was easily his best start as a major leaguer and it had to be incredibly sweet for him considering the circumstances. 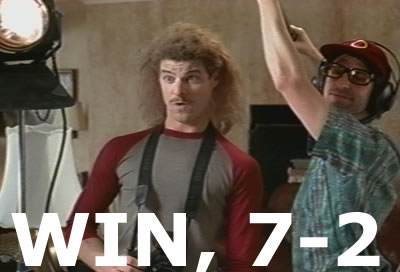 Fresh off of two victories over the Giants, the Mets came into this one looking for a sweep, something they haven't done in nearly 20 years against the Giants in San Francisco. Facing off against Matt Cain, the Mets jumped out to a lead very quickly as Eric Young Jr. walked to lead it off and then stole second, advancing to third on Buster Posey's throwing error. Daniel Murphy knocked Young in with a single to center to give the Mets a 1-0 lead. They weren't done there, though. After David Wright popped out, Ike Davis walked, Marlon Byrd struck out for the second out of the inning but then Kirk Nieuwenhuis walked to load the bases. Cain's had a rough year and this inning did not look like a vintage Matt Cain inning, as his offspeed pitches lacked bite. With Cain on the ropes, the Giants quickly got reliever Mike Kickham up in the bullpen and they'd ultimately go to him after John Buck knocked in two more runs with a single to center field. Cain would last just two-thirds of an inning, allow three runs, and leave the Giants with a lot of questions in the process.

That's where Zack Wheeler comes in. The 23-year old was making his fifth big league start and though his first four had been up and down, you could certainly flashes of his oft talked about ability in there. Wheeler did a lot more than flash that ability, as he shut down the Giants' offense over his seven innings with little trouble. Now let it be known, the Giants have struggled mightily at the plate in recent weeks and the team as a whole has crumbled to where they are now, in last place and 10 games below the .500 mark. But that shouldn't take anything away from Wheeler, who pounded the strike zone with his fastball all game long and was incredibly efficient with his pitches. Wheeler didn't allow a hit until the fourth inning, a single to Pablo Sandoval and the Giants would scratch out just a single run in the seventh on a Brandon Crawford single. Most of the contact against Wheeler was soft and his fastball was popping. As Keith Hernandez mentioned during the broadcast, it was probably the best his fastball has looked in the big leagues.

Mike Kickham shut the Mets' offense down until the 5th inning, when Marlon Byrd launched his 15th home run, a two-run shot to make the score 5-0. Launched is a very appropriate word here because he hit it out to dead center field, quite a shot at AT&T Park. Byrd's power has been both outstanding and shocking all season, and he continues to put on a show at the plate. The Mets would add two more in the sixth inning, as John Buck doubled over Gregor Blanco's head to lead off the frame. Two batters later, it was Zack Wheeler's turn to copy Buck, as he launched his own double over Blanco's head. For Wheeler, it was his first big league extra base hit and his first run batted in. Wheeler would score on Daniel Murphy's double, capping the scoring for the Mets at seven.

The Giants would scratch out their run against Wheeler in the seventh and then one more against LaTroy Hawkins in the ninth but those were essentially pity runs, as Hawkins went on to shut the door and seal the sweep. For the Mets, it was their fifth victory through six games on this roadtrip and their seventh win in ten games in the month of July. 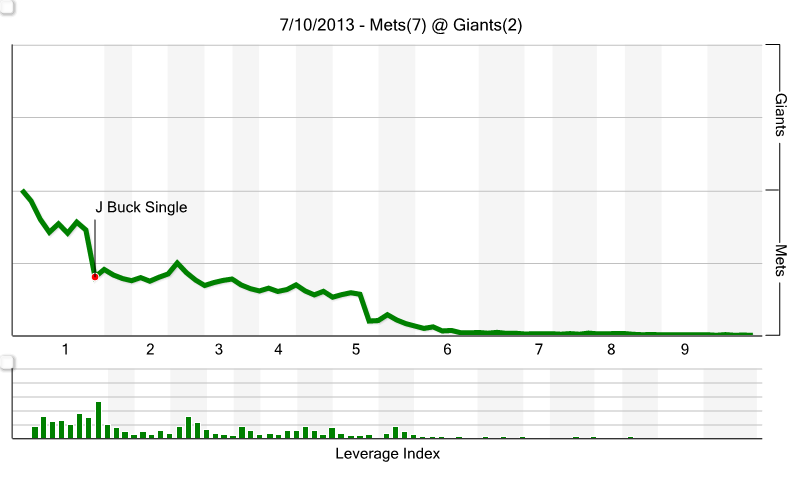