Mets vs. Pirates Recap: Harvey not missed in rotation, but Torres missed dearly in bullpen

Carlos Torres pitched well enough as a starter to give the Mets the chance to win, but this was a night in which New York really could have used his services as a reliever.

Share All sharing options for: Mets vs. Pirates Recap: Harvey not missed in rotation, but Torres missed dearly in bullpen

The Mets lost 4-2 in Pittsburgh on Saturday night despite a solid start by Carlos Torres, who was making his first major league start of the season in order to give Matt Harvey a break. After getting the Pirates to fly out four straight times to Marlon Byrd to start the game, Torres finally started missing some bats in the second inning. He used his slider to strike out Russell Martin and Garrett Jones to end the second. In the third, Pittsburgh hit a pair of singles, but Torres ripped a fastball past Starling Marte to register a key out, and the side was eventually retired. 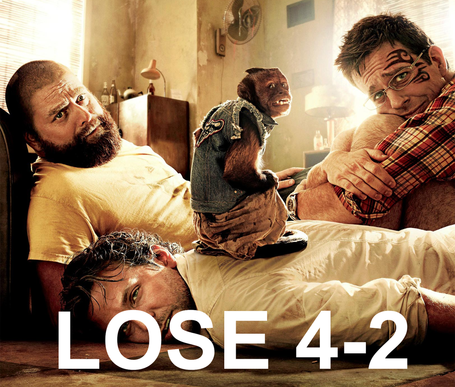 Meanwhile, the Mets were having trouble of their own with Pirates starter A.J. Burnett. In the first, the Mets failed to score even though Eric Young led off with a walk and a steal. In the second, a pair of unlikely singles from John Buck and Omar Quintanilla wasn't good enough to bring in a run. The third inning saw the Mets go down quietly after David Wright's second strikeout of the night (he wouldn't strike out again, but he finished the night 0-for-5).

More pleasant for Mets fans was the fourth inning, which featured the first run of the game. With one out, Marlon Byrd walked and was driven home when Kirk Nieuwenhuis ripped a double to right-center field. Nieuwenhuis has developed into a nice little offensive weapon recently, and last week's amazing five-RBI performance in Milwaukee doesn't look like a total aberration.

After Torres continued to dominate Pittsburgh batters in the bottom of the frame, the Mets decided they could do with one more run in the fifth. Young and Daniel Murphy got things started with back-to-back singles that put runners on the corners with nobody out. Wright followed with a ground ball to third base that would have scored a run if not for a nice play by Pedro Alvarez to throw out Young at the plate.

Hope was renewed for the Mets when Murphy and Wright perfectly executed a double steal with Ike Davis at the plate, but then Davis struck feebly to waste his chance. Byrd, however, would do no such thing. New York's most cost-effective player not named Matt Harvey hit an infield single to shortstop to drive in a run.

Now that New York was settling in, it was time for Torres to spontaneously combust. He allowed a leadoff double to Jones that Nieuwenhuis just missed on a diving attempt. Jones was quickly driven in on a Jordy Mercer single, and the Bucs looked to be destined for more after Barmes singled and Burnett laid down a solid sacrifice bunt. Torres made matters worse for himself when he plunked Marte to load the bases, but then Jose Tabata hit the first pitch he saw right to Quintanilla to start a 6-4-3 double play. The day was saved, for now.

The Mets chased away Burnett in the sixth when Young hit a two-out single to put runners on the corners with two outs. That turned out not to be a good thing, though. Lefty Justin Wilson came out of the bullpen and struck out Murphy to end the threat. Little did the Mets know, but they would only reach base one more time for the rest of the game.

The Pirates on the other hand, would have many more baserunners. Perhaps as many baserunners as there are stars in the sky. It really depends on how much light pollution there was on that particular night, though. Anyway, Terry Collins decided that 80 pitches was quite enough for Torres, and he brought on David Aardsma to start the sixth inning. The veteran right-hander quickly surrendered the lead when Andrew McCutchen blasted a home run to center field. At least Aardsma would settle down and get out of the inning, though.

Settling down was not something that other pitchers in New York's bullpen had in mind. After the Amazin's bats were stymied by Wilson in the seventh, the Buccos dug in for a rally. Greg Burke entered the game as part of a double switch for the Mets and struck out Clint Barmes to start the inning. Then, Travis Snider entered as a pinch hitter and got the trouble started by ripping a single right through Davis at first base. The play was initially ruled an error and later changed to a hit, but that is not going to change anyone's opinion on whether or not Davis should have stopped the ball.

Burke got Marte to line out to third, but then Tabata bounced a ground ball into right field to put runners on first and second. McCutchen was up next, and he came up huge once again by hitting a single to left that was just out of Wright's reach. Snider came around to score to give the Pirates a 3-2 lead. Pittsburgh's excellent bullpen would make that margin hold up, but first Josh Edgin had to make a fool of himself.

Edgin was brought in to retire fellow lefty Pedro Alvarez, but instead Edgin walked the Vanderbilt alum to load the bases. Collins decided then that it was a good idea to leave Edgin in the game to face the right-handed Martin. Edgin walked him as well to drive in a run and double Pittsburgh's advantage. Although Gonzalez Germen came in to finally end the frame, the damage had been done. The Mets were smoked by Mark Melancon and Jason Grilli in the eighth and ninth innings, respectively, and the game was over.

As a consolation note, Bobby Parnell pitched the eighth and struck out the side in a rather filthy manner. How he managed to do this without a lead, and thus without his closer's adrenaline flowing, is anyone's guess.

The Mets now have just one more game to go until the All-Star break. That game is tomorrow afternoon against these same Pirates at 1:35 p.m. Dillon Gee takes the hill to face rookie right-hander Gerrit Cole. 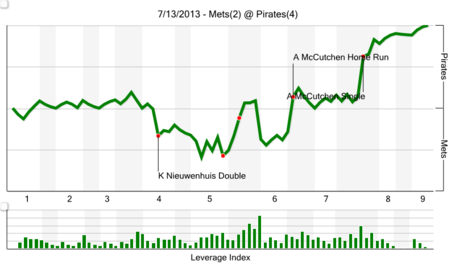