Mets Daily Farm Report - 7/17/13: Like Binghamton Mets Baseball? Have I Got A Recap For You!

Share All sharing options for: Mets Daily Farm Report - 7/17/13: Like Binghamton Mets Baseball? Have I Got A Recap For You!

The Binghamton Mets were outhit, outpitched, outeverythinged by the Flying Squirrels in a 9-3 loss last night. For most of the ballgame, Binghamton was down, but not out- with six innings completed, the score was a very competitive 3-1. Angel Cuan, making his first start of the season with Binghamton, was decent, but Chris Gloor, Richmond's starter, was better. Gloor wasn't necessarily particularly dominant, allowing five hits and two walks over his six innings of work, but Binghamton's offense could only muster three runs against him. Both teams had big 7th innings. In Richmond's case, the big inning took the form of beating up on Chase Huchingson. The beleaguered reliever gave up a grand slam to Squirrels slugger Angel Villalona, but because of various technicalities, none of the runs were earned runs. For Binghamton, that 7th inning took the form of Blake Forsythe launching a ball over the centerfield wall, scoring two, and chasing Chris Gloor from the game. Richmond immediatley scored two runs in the top of the 8th, negating the headway gained by the B-Mets in the bottom of the 7th. Ryan Fraser loaded the bases, and a single by Mark Minicozzi drove two men in. Binghamton would get a few more scoring opportunities in the 8th and 9th, but proved unable to capitalize on either. In the 8th, Justin Turner walked, but Josh Rodriguez hit a double play ball, killing the momentum of the inning. In the 9th, Travis Taijeron walked, but Blake Forsythe hit a double play ball, killing the momentum of the inning by ending the game.

With the loss, Binghamton's four-game winning streak was snapped, and Richmond's eight-game losing streak ended. Binghamton will look to win their 60th game of the season tonight. 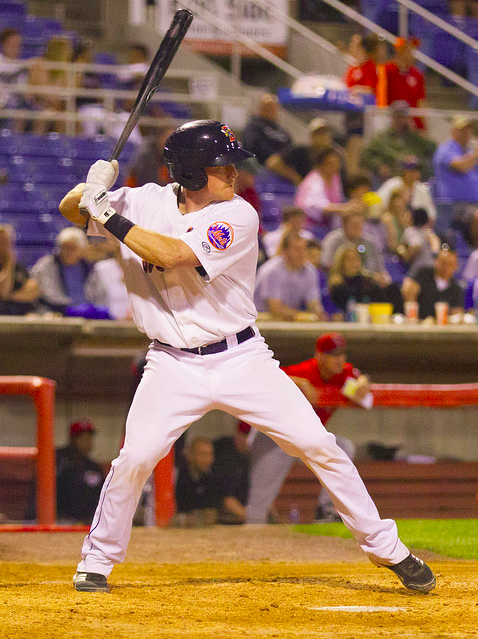 The only two considerations for Star of the Night are Cesar Puello, and Blake Forsythe, each of whom got on base twice and drove men in. Because Forsythe knocked in two with a home run, whereas Puello only knocked in one with a double, he's our star.

Not much to work with. Danny Muno and Josh Rodriguez will wear one horn each, as they both went 0-4 last night, and made one error.