Jacob deGrom allowed two runs over six and a third strong innings to lead the 51s to a 3-2 win Thursday night. For someone who started the year in high A St. Lucie, it's pretty impressive what deGrom has been able to accomplish thus far in AAA. The strikeout numbers aren't great, but the strikeout to walk ratio is good and his ERA is just an even 3. deGrom needs to be protected from the Rule V draft this off-season so he is definitely someone who figures into the plans for next season, either as a bullpen piece or a spot starter. Wilmer Flores sat this one out, still bothered by the ankle he injured just before the all-star break. He also was placed on the 7-day DL, so don't expect him to be back in the lineup for a few days.

Mark Cohoon had a big challenge Thursday night, facing a New Britain squad featuring highly touted prospect Miguel Sano, whose power is thought to be among the best in the minor leagues. Cohoon was game for the challenge, pitching into the eighth, allowing 3 runs while striking out five, walking none, and, somehow, retiring Sano three times. And while Cohoon's performance was commendable, I probably buried the lede because Binghamton rallied from a two run, two-out, none-on deficit in the top of the ninth to win, 4-3. Justin Turner got things started with a single before advancing to the second on a wild pitch. A Josh Rodriguez walk followed by an Allan Dykstra single scored Turner and put the tying run on second. Cesar Puello then drew a walk--his fourth in his last 10 games (baby steps)--to load the bases, setting the stage for Rhyne Hughes who embraced the moment and singled to drive in both the tying and go-ahead runs. Jeff Walters came on for the ninth and was able to retire Sano along with two other batters to record the save.

This game started off well enough--the first two batters reached base and Jayce Boyd drove them in with a double--but ended limply with the St. Lucie Mets managing just four singles over the next 30 outs. Tim Byrdak--on rehab duty--got knocked around in the bottom of the 10th to end the misery and hand St. Lucie a 3-2 loss. Matthew Bowman had a solid outing, allowing one earned run over seven innings. It was a nice bounce-back performance after issuing five walks in his last start.

Despite two hits from the struggling Brandon Nimmo, the Sand Gnats fell in West Virginia, 5-3. Nimmo walked and struck out twice to go along with his two hits. With the recent spate of strikeouts, coupled with observations of decreased bat speed and a lingering hand injury, it might make sense to shut Nimmo down for a few weeks.

This game was broadcast on SNY and was a dull affair, lacking in observable talent to my untrained eye. One observation I was able to make; Dawrin Frias looks a lot like Bartolo Colon. Don't trust the MiLB photo, trust me. 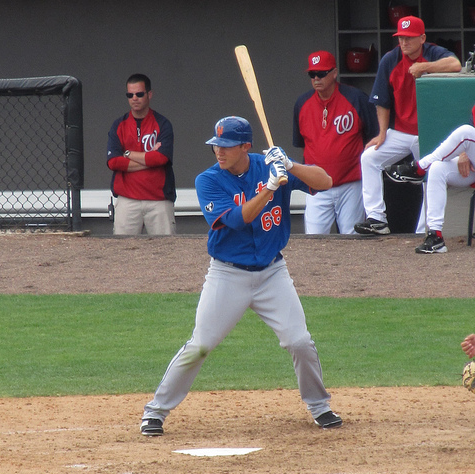 The 25-year-old den Dekker checked in at no. 17 on the Amazin' Avenue top 50 (PHOTO CREDIT: Bryan Green)

The star of the night goes to Matt den Dekker, who homered and walked in four plate appearances. In an extremely small sample den Dekker has been drawing walks at a solid clip. Of course, he's been striking out at a solid clip as well. His strikeout rate is probably the single most important thing to monitor going forward. If he can put bat to ball and strikeout less the 25% of the time, his defense and pop should be able to make him a positive contributor in the majors.

I'm going with Vicente Lupo, not so much for his 0-for-3 with two strikeouts, but more for his .185/.260/.277 line thus far. Too soon to draw conclusions, but it's possible it's unwise to get excited about DSL stats. Likewise, it's probably unwise to get worked up about GCL stats, especially 67 at-bats worth.