Josh Satin had a great game, and Andrew Brown capped off an extra-innings win with a walk-off single.

Share All sharing options for: Mets vs. Diamondbacks Recap: Thirteen innings and five hours later, Mets win on a walk-off

It took thirteen innings spanning over five hours, but the Mets eventually beat the Diamondbacks on Monday night. Given the team’s tendency to play extraordinarily long games only to end up losing, Andrew Brown’s walk-off single the the bottom of the thirteenth was a pleasant surprise. 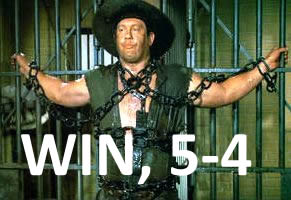 Much earlier in the game, it looked like Shaun Marcum was on his way to a terrible start. He gave up a long two-run home run to Paul Goldschmidt in the first inning and allowed another run to score in the second. After that, though, Marcum worked four scoreless innings, occasionally getting out of trouble, and left the game after the sixth having allowed just the three runs.

In the bottom of the eighth, Omar Quintanilla tripled on a ball that was nearly caught by Gerardo Parra in the right-center field gap. Parra was forced to leave the game with an undisclosed injury after hitting the ground hard. He was able to walk off the field under his own power, but it took several minutes for him to get up from the field.

Shortly after play resumed, Young came through with a two-out double to cut the Mets’ deficit to one run, but after advancing to third on a wild pitch, Young was stranded at third to end the inning as Daniel Murphy flew out to left field.

Thanks to Carlos Torres’s 1.2 scoreless innings, Josh Edgin’s successful one-out apperance, and LaTroy Hawkins’s scoreless ninth in relief of Marcum, the Mets entered the bottom of the ninth down by just one. After a ground out by David Wright, Marlon Byrd hit a double off the orange line on the left-center field wall, just barely missing a game-tying home run. Josh Satin—who went 3-for-6 with two doubles and a walk in the game—singled to score Byrd and tie the game.

Arizona closer J.J. Putz then walked John Buck unintentionally and threw a wild pitch. Satin took third with ease, but Buck—a meaningless baserunner with two outs and the winning potential winning run well on his way to third—tried to take second on the play and was gunned down by Arizona catcher Miguel Montero. The inning was over, and the game went to extras.

From there, the game turned into a contest of bad moves by both managers. Terry Collins opted to have Andrew Brown sacrifice bunt with a runner on first base in the bottom of the tenth inning, giving away an out for a runner that never came around to score. Not to be outdone, Kirk Gibson twiced ordered intentional walks of John Buck, perhaps the coldest hitter in baseball over the last few weeks.

The Mets’ bullpen finally gave up a run in the thirteenth, as David Aardsma served up a home run to Cody Ross. But the Mets would not be outdone in the bottom half of the inning. Josh Satin hit a one-out double, Buck drew the second of his intentional walks, and Matt Havey came up to—surprise!—sacrifice bunt the runners. Gibson opted to intentionally walk Quintanilla to load the bases, the last of the strange managerial moves in the games, before Andrew Brown laced a single to left-center field to score Satin and Buck.

"I’m just happy it’s over," Brown said in his on-field interview with Kevin Burkhardt after the game. 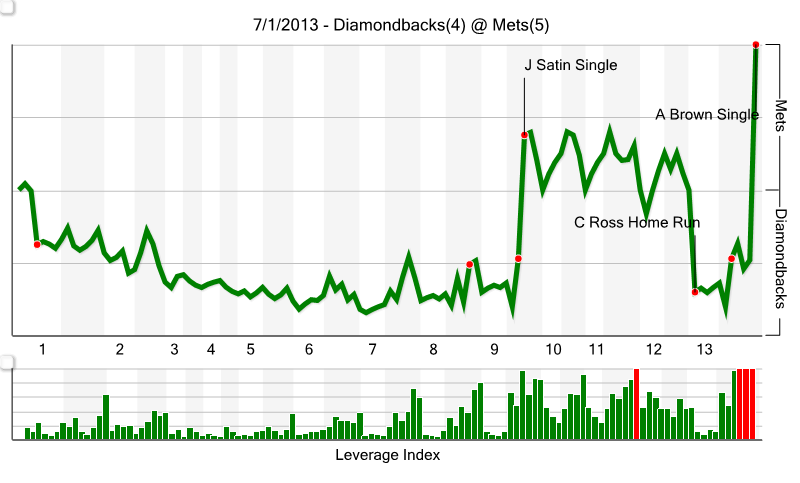