Jeremy Hefner got knocked out by the Phillies after two innings as the Mets dropped the first game of the second half.

Share All sharing options for: Mets vs. Phillies Recap: Hefner Day is ruined!

Let's get this out of the way right at the start: Jeremy Hefner was not good on Friday. He's been fantastic for the majority of the last two months, admirably turning around a season that looked dead in the water back in April. After months of such great pitching, Hefner was probably about due for some regression. Well, that came against the Phillies on Friday, as they torched him for 8 runs in 2+ innings and beat the Mets 13-8. One bad game is not a huge deal, so let's hope that he can get himself back on track in his next start. 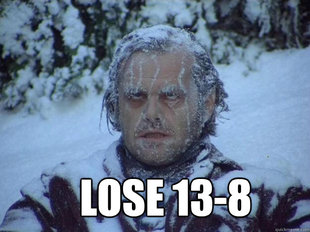 Jimmy Rollins led off the first inning with a single to center field. After striking out Michael Young, the carnage began. Chase Utley lined a ball to center field that kept carrying and carrying. Kirk Nieuwenhuis started out slowly after it, then went into a sprint, and somehow the ball ended up sailing over his head and hitting off of the wall for a run scoring triple, putting the Phillies ahead quickly. Domonic Brown followed with a single to knock in Utley, making the score 2-0. After Darin Ruf singled to put runners at the corners, Delmon Young hit a run-scoring bleeder to David Wright that he could do nothing with and then John Mayberry singled after that, tacking on the fourth run of the Phillies' first inning ambush.

Things didn't get much better after that. Hefner tossed a scoreless second inning but their offense got back to work in the third. Brown ripped a home run into the Pepsi Porch to lead off the frame and Philly got two more off of Hefner before Terry Collins had seen enough. Greg Burke was summoned from the pen but his outing was just as poor. He allowed Hefner's final inherited runner to score and then allowed three more to cross on Michael Young's three run home run. At the end of the inning, it was 11-0.

Marlon Byrd got the Mets on the board against Kyle Kendrick in the fourth inning, launching a three-run homer of his own. For Byrd, it was his 16th of the year. Unfortunately, they couldn't score any other runs despite getting two more runners on base after the home run. In the Phillies' fifth inning, Josh Edgin came on and allowed a two-run home run to Chase Utley to cap the Phils' scoring at 13. The Mets got a run in the bottom of the inning on a Daniel Murphy ground out and grabbed two more in the sixth but with the bases loaded and two out in that frame, pinch hitter Josh Satin wasted what was their best opportunity to get back into the game by grounding out weakly to third base. Down 13-6, the Mets didn't score again until the 9th when David Wright crushed a two-run dinger, his 14th of the year, off of Justin De Fratus. TRAID! Despite scoring 8 runs, they couldn't muster any more. The hole the pitching dug early on was just too deep. 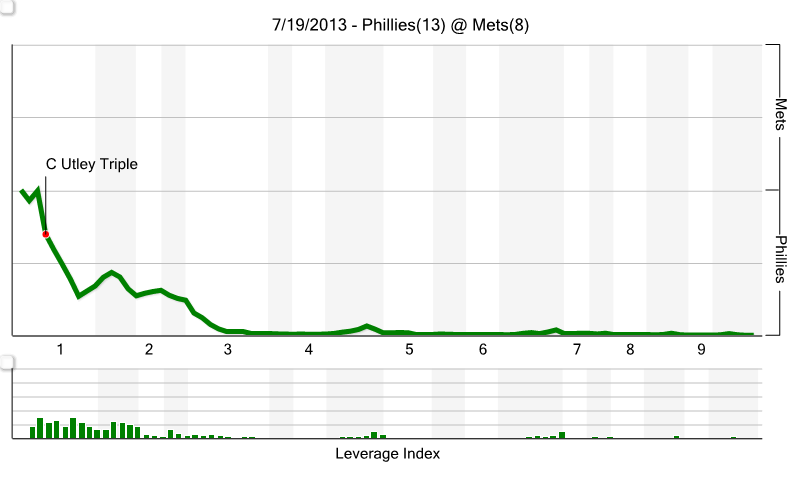