*All results from games played on Saturday, July 20th 2013

In an unusual turn of events, the Vegas bullpen actually had a very good night, preserving a 4-4 tie for six innings before they finally gave up the ghost in the twelfth. Rafael Montero continues to have a rough adjustment period in the Pacific Coast League, walking three and giving up four runs in five innings of work.

"These are the games that try men's souls, the amateur scout and the local beat reporter will, in this crisis, shrink from the service of their organization, but he that sits behind home plate now, deserves the love and thanks of man and woman."

This may have been the worst game I ever covered. And I've sat on plenty of Penn and Sally League games. Rock Cats forgot to cover bases, dropped routine pop-ups, threw balls into dugouts, and couldn't throw strikes. Innings bled one into the other, it felt like the B-Mets had the bases loaded in every inning. They may well have. The throng of scouts around me groaned with every piece of poor fundamentals. We'll do it again today, because that's baseball, Suzyn.

Having minor league teams in Florida can be problematic, you guys.

Matthew Koch got lit up for the second consecutive start, but the Gnats rallied from a 6-1 deficit. Albert Cordero doubled in the go-ahead run in the seventh. He was one of five Savannah players who had multi-hit games, led by Brandon Nimmo with three knocks.

Despite a couple rain delays that took almost as long as the actual game, the Cyclones managed to outlast the Muckdogs (and the weather). The Cyclones struck for three in the first and Miller Diaz and company made it hold up for eight more very long innings.

REHAB ALERT: Justin Turner played shortstop and went for 0-2 with a walk and a run scored. He's expected to join the Mets early next week.

Kingsport continued their winning ways, rallying for four in the eighth against Princeton without a single base hit. Yep, it's the Appy League

REHAB ALERT: Cory Vaughn went 1-3 with a triple, run scored, and a walk. 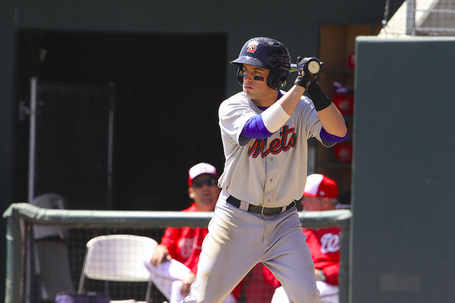 It's not quite a golden sombrero, but 2 K plus an error in the field is good (bad) enough to get Valdespin the horns tonight.