Leading up to the All Star Game, the only worry Mets fans could have had about Matt Harvey involved the intense hype surrounding him. Between the ASG start, an appearance on Jimmy Fallon, a less-than-humble Men's Health profile, a supermodel girlfriend, and pictures of him all nekkid in ESPN Magazine, he could easily succumb to all those fatal distractions that were so deadly to the vainglorious R.A. Dickey. At least that's what we were told by the local tabloids, reputable publications that have absolutely no vested interest in creating chaos or misery where there is none.

After Sunday's game, it's clear that if this is how Matt Harvey reacts to distractions, by all means give the man more distractions. Let him wear headphones blasting audio books into his ears. Import the Rockies' horrid dinosaur mascot to stand behind home plate. Put the pitcher's mound on a pneumatic plunger that jolts at irregular intervals. Harvey can not only handle it, but he will surely thrive on it. 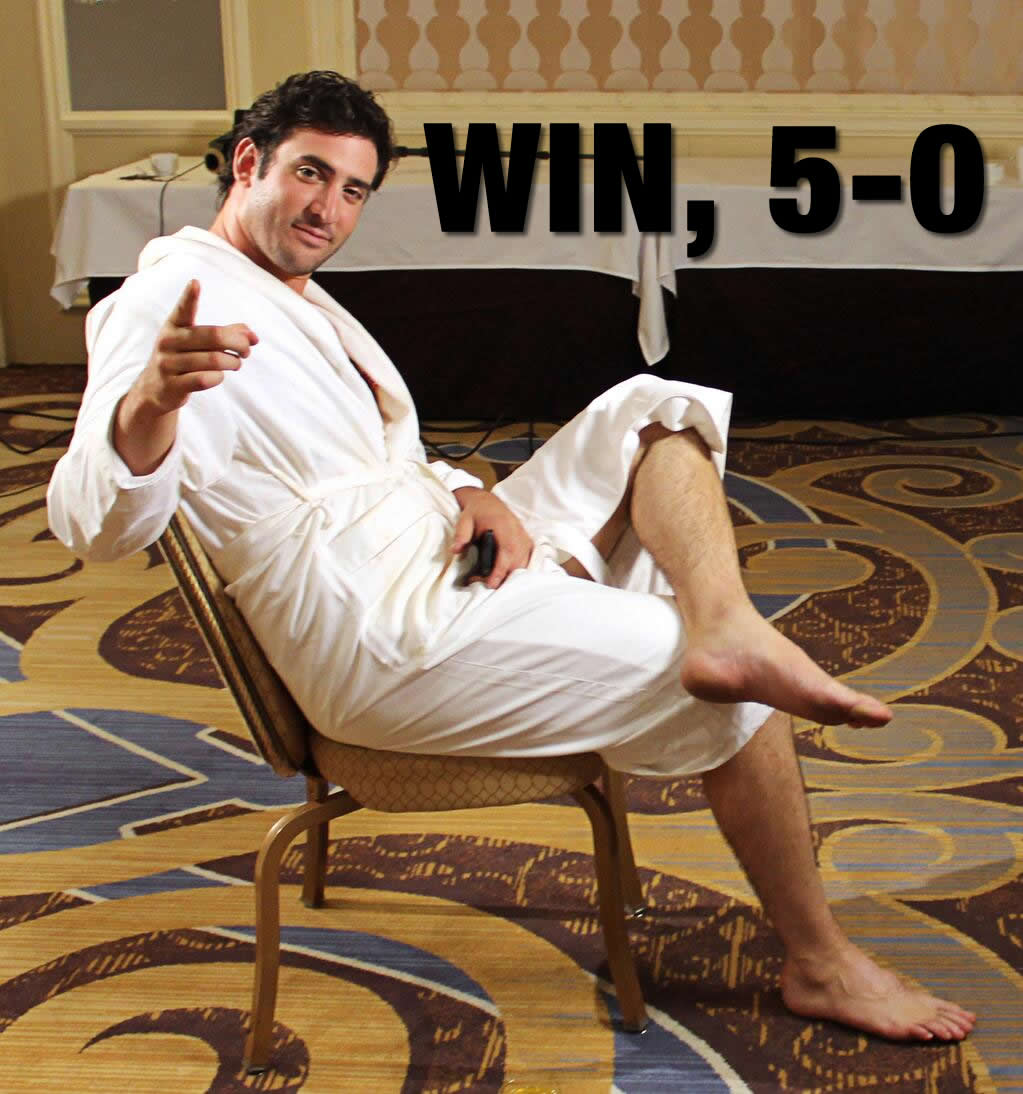 From the very first pitch, Harvey was in full command of this game. In the top of the first, two quick outs were interrupted by a Chase Utley Special (getting nailed in the elbow as he stands on top of the plate), but that only seemed to anger Harvey, and you would not like Harvey when he is angry. Domonic Brown found this out when he struck out on a vicious slider.

Historically, the Mets have not had much luck against Cliff Lee, an affliction they share with most of the National League. This afternoon, however, their luck took a brief turn when David Wright took Lee deep for a one-out solo shot. The homer bounced off of the railing in front of the Party City Deck in left center, which prompted a review, but the home run call was eventually upheld. No review was necessary for the next batter, Marlon Byrd, who got ahead of Lee and crushed one to the middle deck in left field.

I personally don't like the use of words like filthy to describe a pitcher's stuff. I can't explain why, exactly; it just makes me cringe. Perhaps because it's so overused, or because there's an element of grossness to it. In baseball parlance, the only phrase that makes me feel worse is when I hear John Sterling say "back to back, n' belly to belly!" I keep a recording of this handy at all times in case I accidentally swallow poison and need to induce vomiting.

And yet, there's no word that could adequately describe how Harvey pitched today but filthy (unless there's some hybrid word in German I've yet to learn), and his filthiness only increased as the game went on. Harvey worked a quick top of the second, setting down the Phils in order while recording another K. He was even more dazzling in the third, striking out Eric Kratz, Lee, and Jimmy Rollins in order. It was particularly satisfying to see Rollins go down on three pitches and appear to have no clue on any of his swings. Because when Jimmy Rollins fails, the universe wins.

Harvey did not allow a hit until one out in the fourth, when Chase Utley (of course) singled over the leaping glove of Daniel Murphy. Actually, it would be more accurate to say Murphy leaped and the glove was on his hand as he did so. Don't worry, gloves have not gained self awareness and begun doing somersaults. Harvey shook this off quickly, fanning Brown for the second time on a change up in the dirt, then inducing an easy fly ball from Delmon Young.

Lee showed no immediate ill effects after his gopher balls, retiring the Mets in order easily in the second and third. Then, Wright singled to open the fourth, and Josh Satin legged out a one-out infield single. With two outs, Lee backed Juan Lagares into an 1-2 hole but hung a curve that the outfielder drilled barely over the left field fence. The ball was hit very close to location of Wright's homer, and just like Wright's shot it required a review to confirm it. But confirm it the umpires did, giving Lagares a three-run homer and the Mets a 5-0 lead.

Both reviews were necessitated by the railing in front of the Party City Deck beyond the left field fence, the spot that Howie Rose used to call The Great Wall of Flushing before the fences were moved in. The reviews consumed less than 3 minutes total, but you could probably eliminate reviews altogether if you just got rid of the railings. Would fans get hurt by flying baseballs and teetering over the edge onto the field? Of course they would. Very badly hurt, I'm sure. But it would save the umpires some valuable time and, more importantly, lead to a goldmine of gif material.

Lest he be outshined by Lagares, Harvey struck out the side in order again in the top of the fifth to bring his K total up to 9. This time, his victims were Kevin Frandsen, John Mayberry Jr., and Kratz again. A Mets pitcher hadn't struck out the side twice in one game since 2006, when that feat was accomplished by...wait for it...Oliver Perez. (In your SAT analogy, Oliver Perez references are to Mets of the last decade as Frank Stallone references are to Norm Macdonald.) Harvey permitted a two-out single to Michael Young in the sixth but was retired the elusive Utley on a hard liner to second.

Harvey began the top of the seventh with his pitch count approaching 100. He struck out Brown for the third time to open the frame, but then saw Delmon Young lace a double down the left field line, the Phils' first extra-base hit of the day. Harvey knuckled down to get Frandsen to ground out weakly for out number two. Then Mayberry swung at his first pitch and gave the ball a ride to left center, but Lagares ran it down to end the inning and Harvey's afternoon. Final line: four hits, no walks, 10 Ks, 22 swinging strikes (according to Marc Carig's tally), and one huge standing ovation upon his exit.

After Lagares' surprising shot, there was no more Mets offense to speak of, though Harvey's start assured that would be of little consequence. Lee finished out his afternoon by allowing singles to Byrd and Lagares but stranding both runners in the bottom of the sixth. Lefty Antonio Bastardo took his place in the seventh and set down the Mets in order. Jonathan Papelbon made his first appearance of the series in the eighth and also retired the Mets 1-2-3, thanks in part to Mayberry running down a fly ball off Wright's bat at the 390 mark in right-center.

Scott Atchison had the unenviable task of following Harvey's act when he took the mound in the top of the eighth. He permitted a two-out single to Rollins but nothing else. He was brought back out for the ninth, struck out the first two batters he faced (including Brown, giving him the un-coveted golden sombrero), and ended the game on a lineout to first.

The win gave the Mets a rare victory over Cliff Lee and an even rarer series win at home, while also sending the on-the-bubble Phillies back under .500. As for Harvey, if that's a distracted man, we should all be so distracted. 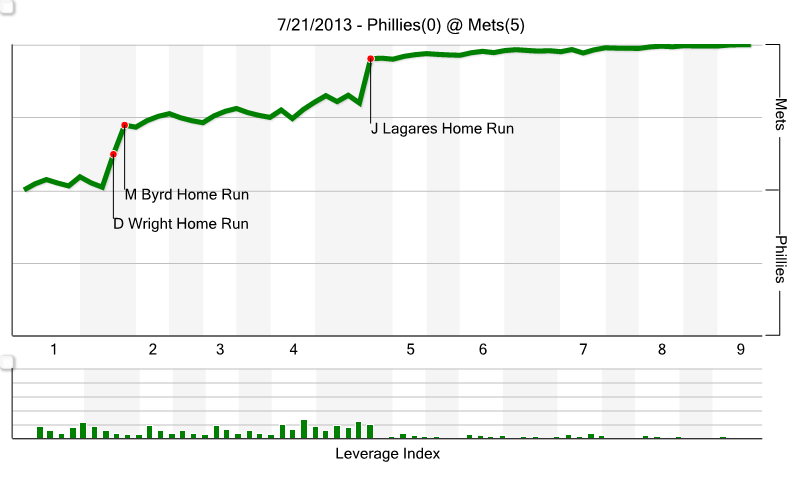