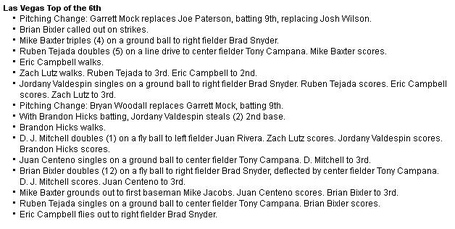 Every Las Vegas starter except for Matt den Dekker had at least one hit for the night.

The B-Mets took three of four from the Rock Cats with their 5-3 win last night. Allan Dykstra got things going with an RBI double, scoring Josh Rodriguez, but Erik Goeddel promptly gave that run right back on a Nate Hanson solo home run in the bottom of the 1st, and then a Miguel Sano solo homer in the bottom of the 2nd. In the top of the 3rd, the B-Mets put up a three spot to but them back ahead. Josh Rodriguez hit a double that scored Alonzo Harris, Cesar Puello hit a double that scored Rodriguez, and Travis Taijeron hit a double that drove in Puello. In the bottom of the 6th, Wilfredo Tovar comitted a throwing error that allowed Miguel Sano to score from second, slimming Binghamton's lead to only one run, but that wouldn't last long. In the top of the 7th, after Puello was intentionally walked to load the bases, Allan Dykstra drove in a second run on a sac fly that scored Danny Muno and gave Binghamton a little more breathing room. Adam Kolarek and Pedro Feliciano worked a perfect 7th and 8th, respectivley, and closer Jeff Walters notched his 26th save of the season.

Rain delayed the start of the game, but St. Lucie and the Cubs got their game in after everything was said and done. Dustin Lawley got things going for St. Lucie, driving in Kyle Johnson with a single. Kevin Plawecki had the opportunity to tack on runs, with men on first and second, but was unable to, grounding into an inning ending double play instead. The Cubs would have no such problems, scoring two in the bottom of the inning. Daytona's left fielder, Zeke DeVoss, was particularly troublesome- after working the count and walking, he stole second base and third base, before scoring on a sac fly. The Mets wouldn't stay behind for long. Though scoreless in the 2nd, they scored a pair in the 3rd to put them back up by a run- after T.J. Rivera doubled, Jayce Boyd hit his 4th home run with St. Lucie, and 9th of the year. In the 5th, Daytona scored a pair of runs, chasing starter Michael Fulmer after an underwhelming 4.1 innings and taking the lead once more. St. Lucie tied things in the 6th on a Kyle Johnson RBI single, and took the lead in the 7th on a Robbie Shields double that plated a pair. Daytona plated a run in the bottom of the 7th, but Dustin Lawley's solo home run in the 9th negated that run and preserved St. Lucie's two run lead, the lead the ballgame would end with.

The Sand Gnats came out of the gates with guns blazing, scoring three runs in the 1st. Maikis De La Cruz got things going with a two-out double. Cole Frenzel should have been out on the ground ball he hit, but a throwing error by Shorebird second baseman Kris Richards gave him life, allowing him to reach first and move on to second while De La Cruz scored. Eudy Pina came to the plate next and hit a long double that bounced over the centerfield fence for a ground rule double, scoring Frenzel. Jorge Rivero then doubled himself, scoring Pina. Just as quickly as they went up 3-0, Steven Matz almost gave the lead back up. After allowing consecutive singles, he walked a batter, loading the bases with one out. He got the next batter to pop up for the second out, but was unable to navigate out of the bases loaded situation unscathed- centerfielder Gregory Lorenzo singled up the middle, scoring two. Savannah scored an insurance run in the 8th inning, on a Pina solo home run, but it would ultimatley prove unnecessary, as Matz and the rest of the bullpen prevented the Shorebirds from scoring again in the game.

It took the Cyclones 10 innings, but they got the win over the Muckdogs, scoring a run in dramatic walk-off fashion. Honestly, though, it should have never gotten to that point. Brooklyn pitchers allowed only two hits the entire game, and the Cyclones left 11 men on base- the combination of seven unintentional walks on the part of the pitchers, and general failure with men in on base was suboptimal, to say the least. The Cyclones scored in the 2nd inning on a pair of doubles by Jared King and James Roche. Batavia scored the next two runs, one in the 5th and one in the 8th. In the bottom of the 8th, down by one, Julio Concepcion grounded out into a force play that scored King, who was at third, tying the game. With neither team able to score in the 9th, into extra innings things went. While Batavia went down 1-2-3 in the 10th, things were a bit different for the Cyclones. The rehabbing Justin Turner singled, L.J. Mazzilli singled, and Jared King bunted to move both runners over. With first base open, Matt Oberste was intentionally walked to load the bases and set up the double play. Julio Concepcion would have none of it, and laced a line drive single into left, driving in the winning run. We can only assume that in addition to rehabbing his body and baseball skills, Justin Turner used this opportunity to rehab his celebratory pie throwing skills.

The offense was clicking on all cylenders, and Chris Flexen was absolutely dominant. Put two and two together, and Kingsport gets another win, this one in dominating fashion. Kingsport put up two three-run innings, in the 3rd, and in the 8th, and one run apiece in the 5th and 9th. The Princeton Rays, on the other hand, had difficulty scoring, knocking in only a single run in the 8th inning. The reason was Chris Flexen, who held the Rays to three hits, all of them singles and two of them coming in the first inning.

Chris Schwinden, on the other hand, was not.