Matt Harvey was dominant in his seven-inning performance against the Phillies on Sunday.

There's not a hitter in baseball who would have wanted to face Matt Harvey on Sunday afternoon. In one of his best starts yet, Harvey struck out ten, walked none, and did not allow a run to score in seven innings. The content below may not be safe for work.

Harvey's stuff was perhaps as good as it's ever been. His fastball averaged 98.34 mph. Averaged. And it topped out at 100.87 mph. His slider averaged over 91 mph. And he wasn't just throwing hard, either. He generated 23 swinging strikes on 112 pitches, a 20.5 percent rate that's just absurd.

Here's how the pitches looked on a strike zone plot. Again, so many swinging strikes. 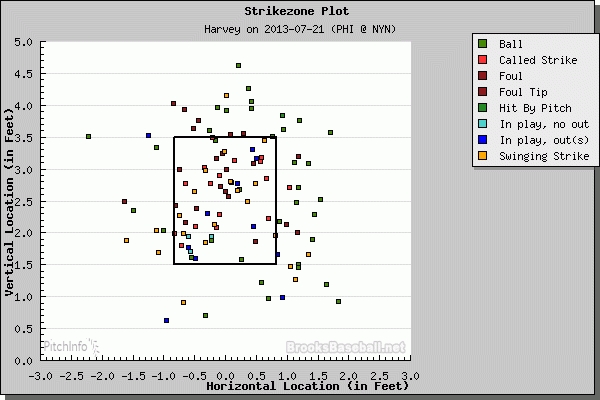 Clayton Kershaw and Adam Wainwright remain Harvey's main competition for the Cy Young award this year. Kershaw has the ERA lead for now, but Harvey has been better in strikeout, walk, and home run rates than the Dodgers' veteran ace. Wainwright has been even better than Harvey in walk and home run rates, but he's trailing a bit in ERA and a big step back in strikeout rate. Harvey isn't a shoe-in, but he'd have a strong case to win the award if voting took place today.

Speaking of the Cy Young race, Harvey's season still compares very nicely to three of the Mets' previous Cy Young seasons. That he's closer to the number of Tom Seaver than R.A. Dickey through twenty starts speaks volumes about just how good he's been.